Bitcoin is the superstar of cryptocurrencies that the majority of people have heard of, but what makes Ethereum any different- and what about Altcoins?

More people own crypto assets now than ever before, and Bitcoin has a growing list of uses, from foreign exchange to buying Teslas and designer watches!

Growing in popularity and usability though, are the Altcoins, this refers to any cryptocurrency that is not Bitcoin. Ethereum is the most well-known altcoin, but there are literally thousands of these coins out there, all with different usages and features.

Contents: Bitcoin vs Ethereum vs Altcoins

Some of the questions to ask when dealing with digital currencies are: Is it a type of currency, a store of value, a payment network, or an asset class?

Below are the main differences you need to know about both BTC (Bitcoin) and ETH (Ethereum).

Bitcoin was created in 2009 by Satoshi Nakamoto. Etheruem was developed in 2015 by Vitalik Buterin and his associates.

Bitcoin is a credible alternative to more traditional currencies acting as a medium of exchange and store of value. Ethereum is a software platform allowing developers to build crypto based apps that can be bought using ETH.

The amount of BTC available is capped at 21 million whilst the amount of ETH is infinite.

The value proposition of Bitcoin

Bitcoin was the first cryptocurrency. As the most valuable digital asset Bitcoin sits at the top of the crypto market. It is evidently volatile but the percentage moves are decreasing with increased liquidity and Bitcoin is regarded by many as the safest of all the digital currencies. giving it the nickname ‘digital gold’.

Gold has been used throughout history as a store of wealth, to protect people (mainly the mega rich) from inflation and economic crisis. The same is true for Bitcoin today, even if the dollar were to crash Bitcoin will in theory retain some value.

Bitcoin has been likened to gold thanks to the mining and its finite supply.

The supply of bitcoins being finite means it is protected from the fate of most fiat currencies that lose value over time as government borrow more and central banks print more to cover the borrowing.

Based on the current bitcoin mining rate there will be no more Bitcoin to mine by 2040. In theory, if demand to use Bitcoins continues to rise, the price of Bitcoin could rise especially fast after the last bitcoin has been mined.

Ethereum is a software platform that allows developers to create and build crypto-based apps. To use Ethereum, developers pay fees to the network and consumers buy apps on the network using Ethereum's native currency, Ether.

Buying Ethereum is more of an investment than speculation in a currency. Whilst you buy Bitcoin as a place to store your wealth, buying into Ethereum is essentially buying into a project.

Instead of ‘digital gold’ think of buying Ether as investing in Google or Facebook in their early stages.

By buying Ether, you are betting that more developers will use Ethereum's platform to create their applications and that more consumers will start using the network to purchase apps and digital assets such as NFT’s.

Should I buy Bitcoin or Ethereum?

This chart shows the percentage moves in both BTC and ETH over the past 3 years. As you can see, from this chart, BTC and ETH move very much in tandem with each other. Many cryptocurrencies are heavily influenced by the movements of the ‘Big 2’ (ETH and BTC). 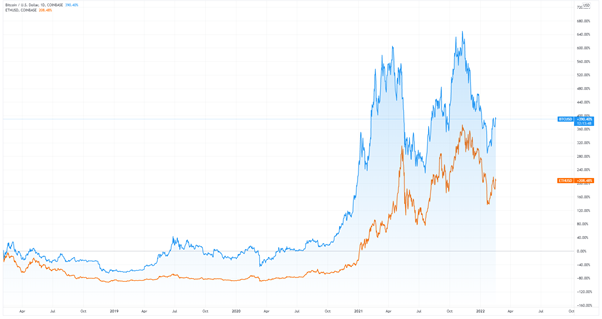 The future value of both these assets is highly speculative, thanks to their infancy and the volatile nature of the two assets. As long as more functionality and uses for digital currencies keep being developed, BTC and ETH should mature into more stable and investable assets.

As for which one to invest in, it really depends on your own values and preferences…

If your priority is hedging against inflation and other economic risks, while storing your wealth in an asset separate from fiat currencies like the Swiss franc or the US dollar, then Bitcoin is for you!

If you are impressed with all the possible businesses that can use the Ethereum blockchain and platform, then Ether is for you!

Bitcoin is more established, Ethereum has great technological potential, so you can always invest in both.

What is the purpose of Altcoins?

The term “Altcoin” refers to any cryptocurrency that is not bitcoin. Think of it as short for “Alternative Coin” i.e it's an alternative to Bitcoin. Altcoins occupy around 40% of the total crypto market cap and there are thousands of them.

Altcoins are a medium for you to find your own purpose. Many altcoins are used to raise money through ICOs for different projects, whether they are NFT collections or charity fundraisers, there is no limit to what you can create. However…

Altcoins have been described by many experts as the 'digital Wild West’.

Altcoins can be created by anyone, therein lies the issue. Some have been built purely on memes and some are backed by great projects, it's hard to tell which is which.

How to invest in Altcoins

Altcoin investing isn’t best-suited to those taking a whole-market or passive investing approach. It is simply too volatile for that kind of hands-off method.

However, if you plan to engage with crypto and learn more about DeFi (Decentralised Finance), you may want to start educating yourself on the different types of altcoins and their uses. Some of the top 10 altcoins of today have grown 1000s of percent in value, while many more have faded into nothing. 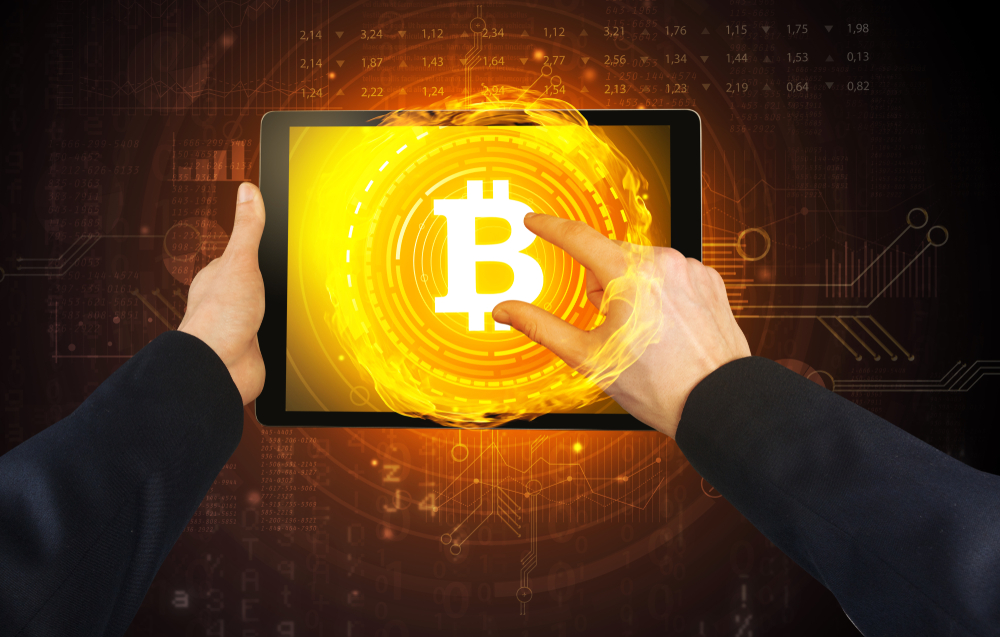 How to trade cryptocurrency CFDs 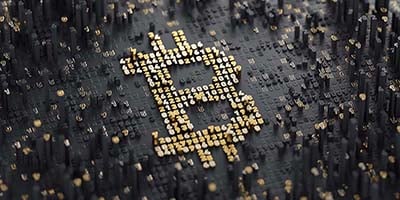