Litecoin is an open-source, payment network that allows near-zero cost, international transactions to be made on a fully decentralised platform.

Litecoin is a cryptocurrency that is unique because it enables instant, near-zero cost payments to anyone in the world. Litecoin is an open-source, decentralised global payment network that runs without any central authority.

Founded in 2011 by the former Google engineer Charlie Lee, Litecoin was one of the first altcoins (digital currencies that aren't Bitcoin) to use the open-source code originally used for bitcoin. It has always been seen as Bitcoin's figurative younger sibling, Lee even described it as the “lite version of Bitcoin” whilst announcing its release in a Bitcoin Forum.

How does Litecoin work?

Just like any cryptocurrency, Litecoin needs to be mined before it's available to be purchased. Miners use high-powered computer hardware to confirm each block of LTC and secure it to the blockchain, this process requires a lot of computing power and involves billions of calculations. This is where the term “proof of work.” is derived from.

Each block of LTC (and any cryptocurrency) is worth a certain amount of coins. Think of this as the miners reward for mining the block and confirming/securing it. For example, miners who successfully verify a Litecoin block are rewarded with 12.5 Litecoins. Similar to Bitcoin, the number of Litecoins awarded is halved at regular intervals.

Halving the reward for mining reduces the rate at which new coins are created, lowering the available amount of supply, even as demand increases. Low supply of LTC combined with high demand will, in theory, ensure that prices stay competitive.

What is Litecoin used for?

In simple terms, Litecoin is used to make payments. Whether you are sending money to friends and family or purchasing a product or service, Litecoin is there as a medium of exchange.

What makes it different however, is that it is decentralised, which means that it cannot be monitored by any central authority like a government or bank.

The record of each transaction using Litecoin contains a numbered wallet address, from where the coins were stored. These are extremely difficult to trace to a specific person. This means LTC does provide a high level of privacy, but it is important to remember that it is not completely anonymous.

Litecoin transactions take, on average, around 2.5 minutes, four times faster than Bitcoin which can take up to 10 minutes. This is due to its faster block processing times.

Both Bitcoin and litecoin have a finite supply of their currency. Whilst Bitcoin has a cap of 21 million bitcoin, Litecoin trumps it by boasting a supply of 84 million coins.

Another key difference between Litecoin and Bitcoin is the coin mining algorithm. While both currencies employ proof of work, Bitcoin uses the traditional SHA-256 algorithm. Litecoin uses a new algorithm known as Scrypt. Scrypt requires less computing knowledge and power, making it possible for the average person to participate in a more simple mining process.

If Bitcoin is ‘digital gold’ think of Litecoin as “digital silver”. Both digital assets, like Gold and Silver, are used for similar things and they move and are affected by the same market forces, whether that be inflation hedges or stores of value. 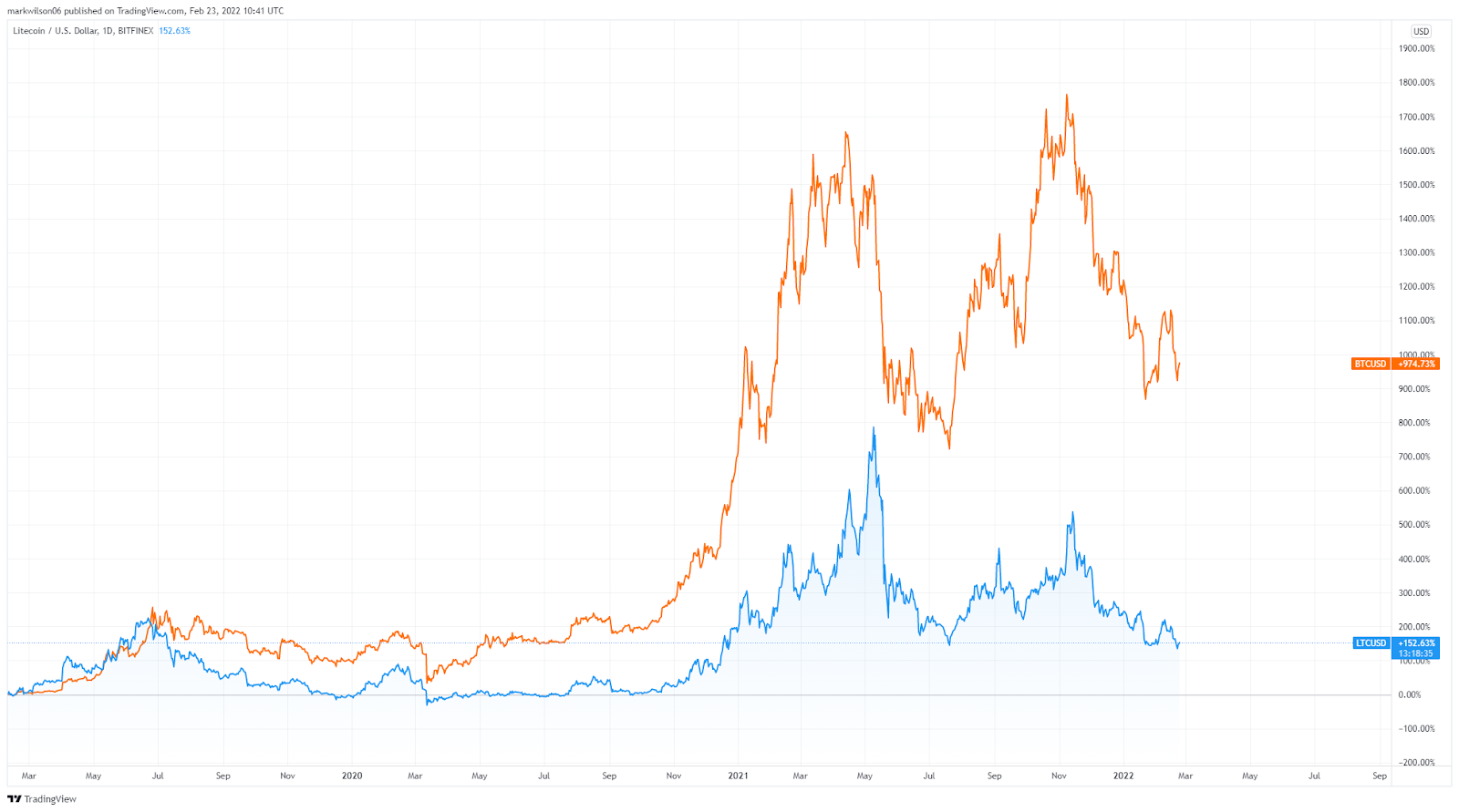 As you can see from the chart above, the value of LTC (Blue line) and BTC (Orange line) are heavily correlated, this association and relative predictability of price give Litecoin an advantage over other Cryptocurrencies which are far more volatile.

One of litecoins biggest advantages is that it is a highly liquid asset. This means that it is very easy for you to convert your LTC into fiat when needed. This is great for crypto investors, especially with the volatility and unpredictability that has plagued the space. It is important to invest in a coin that you can transfer into cash easily when you need it. Especially if the market takes a sudden turn.

The big market cap is another important reason that people add Litecoin to their portfolio. Market capitalisation is the total value of an asset at a specific point in time. When working out the market cap of digital currencies, you multiply the total number of coins available for mining and purchase with the current price per coin.

A big market cap means that the price of the asset is more likely to stay relatively stable versus the smaller up-and-coming tokens. Even if big 'whale' investors enter the market and try to push the price up or down, the price has a better chance of staying relatively stable. We won't see the stability we see in stocks or bonds, however, compared to a lot of the crypto market LTC price isn't hugely volatile.

Does Litecoin have a future?

Litecoin's future is uncertain. Whilst it is a good concept that remains very popular, it was not the first-mover like Bitcoin - and does not have as many use cases as Ethereum.

With the added pressure of newer, faster cryptocurrencies such as Railblocks hot on its heels and ready to take its market share, Litecoin must look for new ways to innovate or risk being drowned out.

What is a Crypto Key? | Public & Private keys

What is a Crypto Wallet? 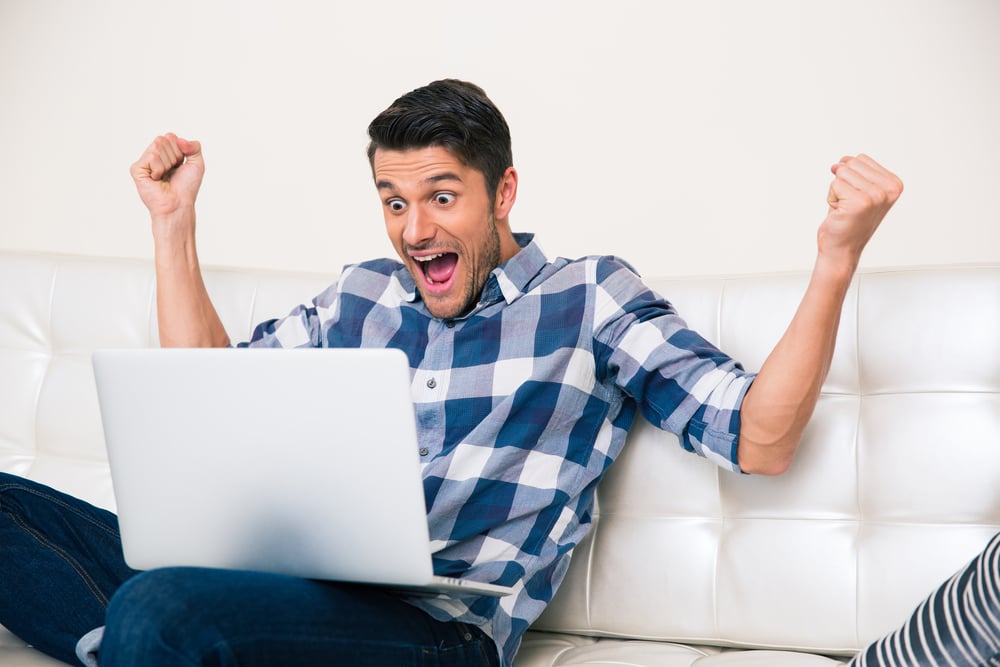 7 tips for trading vs investing from home