70% of the Republicans believe the 2020 U.S election was not free and fair

A vast majority of Republicans - 70% - believe the 2020 election was not 'free and fair,' according to a new poll by Morning Consult. Broken down further, 48% of Republicans polled say the election was "definitely" not free and fair, while 22% say it "probably" was not - over twice the percentage of Republicans who thought it wouldn't be fair when polled just before the election. Overall trust in elections plummets among Republicans: Prior to the election, 68 percent of GOP voters said they had at least some trust in the U.S. election system. Post-election, that dropped to 34 percent. Democratic trust, meanwhile, jumped from 66 percent to 78 percent - source: www.zerohedge.com, Morning Consult 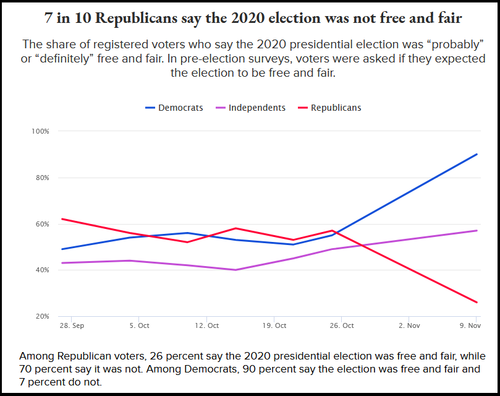