Believe it or not, the S&P Restaurants index is skyrocketing

A great chart and research piece by Bespoke. U.S Restaurants have been surprisingly strong performers over the past several months. As shown on the chart below, the S&P 1500 Restaurants index peaked in August of last year and only made a lower high on February 20th before falling over 40% during the course of the COVID Crash in late February and early March. Since the low on March 18th, the index has now risen over 77% and just broke out to a new all-time high. COVID lockdowns and restrictions on in-door dining have impacted the restaurant industry like nothing ever seen before. But while single-location restaurants run by individuals may be having a tough time with capacity limits depending on their geographic location, the publicly-traded restaurant companies with locations throughout the US have seemingly adapted much better in the post-COVID world (e.g Domino's Pizza). At least, that's what their share prices are telling us... (source: Bespoke) 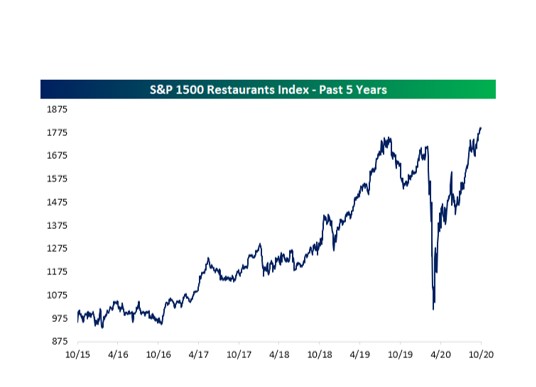