123 days ago • Posted by Jasper Lawler

An army of bullish technical indicators is assembling to put King Dollar back on the throne. In the accompanying chart I've shown four of them, starting with the Bloomberg Dollar Spot Index's clear breakout of its year-long downtrend from last March.

That led to the establishment of a slightly longer-term double bottom pattern -- a positive signal -- stemming from the gauge's lows in 2018. The greenback's strength this year hasn't been in a straight line, leading to the formation of another bullish pattern called a cup and handle, which points the way to further upside. And finally, the 50-day moving average is poised to cross above its 100-day equivalent, a sign of building momentum. 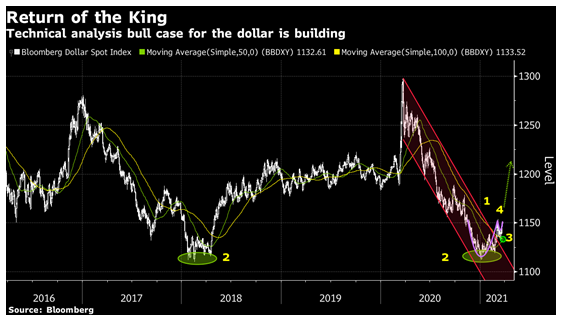