18 days ago • Posted by William Ramstein

Prices in China surged over the seven months through January to records of more than $130 a metric ton for high-grade thermal coal—nearly twice the midyear level—due to slower output last year and a faster-than-expected economic recovery. China was short of thermal coal and officials urged the companies to import more—from anywhere except Australia, China’s biggest supplier. To comply, buyers in China have had to pay steep premiums for imports from farther afield, on top of prices that have risen 84% since midyear. Source: WSJ 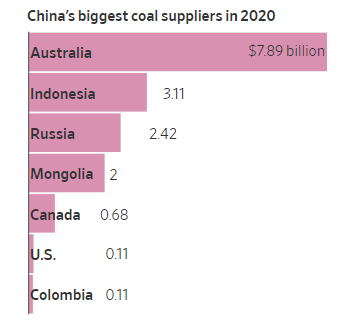