148 days ago • Posted by Martin Boujol

Shares in Japan’s central bank surge most in 15 years

Japan’s central bank joined the ranks of equities with puzzling surges in valuation led by retail investors on Monday, as its shares surged by their daily limit, up 18%, the most since 2005. The BOJ is itself a publicly listed entity on the Jasdaq. It is one of the world’s few publicly traded central banks, with peers including Belgium, Greece and Switzerland. The government holds most of its shares with a 55% stake, while individual investors have 40% (no voting rights). Despite the minuscule trading volume with only 4,100 shares exchanged, Monday’s spike was enough to catch the attention of day traders on Twitter and other online forums where Japan’s growing horde of retail investors share their insights. At its peak in October 1989, a single BOJ share cost an eye-watering 745,000 yen, more than twenty times its current valuation. With Japan’s stocks recently climbing to 30-year highs, retail investor sentiment is improving. 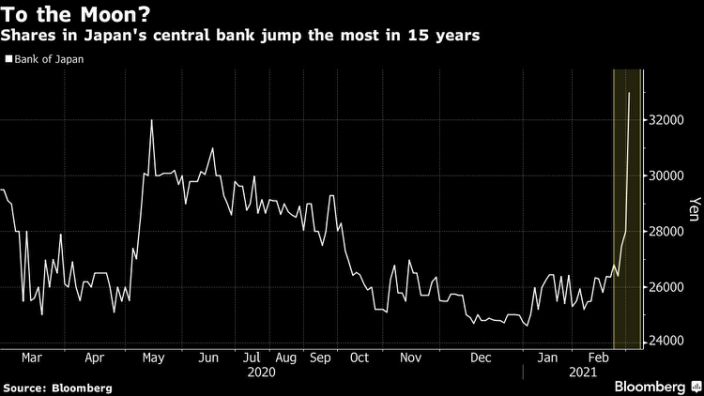