Ether (ETH) soared Wednesday to a new all-time high near $2,700. JP Morgan, in a report Tuesday titled “Why is ETH outperforming?”, suggests the cryptocurrency’s valuations may be less dependent on demand from leveraged traders than for bitcoin (BTC). “Both BTC and ETH markets experienced comparable liquidity shocks earlier this month, which triggered a comparable de-leveraging of their respective derivatives markets in subsequent days," according to the JPMorgan analysts. However, ether's spot-market depth has recovered quicker than bitcoin's, according to JPMorgan. “Open interest data also suggests that the other side of these trades were easier to source,” suggesting better liquidity conditions in ETH futures relative to BTC futures. “Higher turnover on the public ETH blockchain means a noticeably higher fraction of those tokens can be considered highly liquid, further blunting the impact of futures liquidations.” The more resilient bid for ETH futures has allowed for a more rapid recovery in liquidity relative to BTC. “In combination with the continued growth for DeFi and other components of the Ethereum-based economy, this suggests some technical but occasionally important bullish tailwinds versus bitcoin," wrote JPMorgan. Sources: Coindesk, JP Morgan 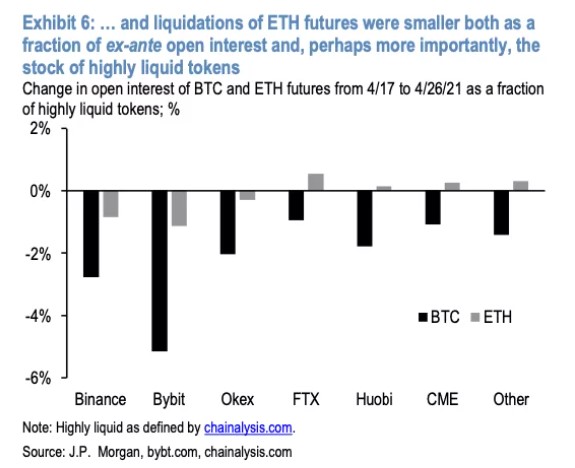