Morgan Stanley: a 10% correction on the S&P 500 might be coming after a failure to breach 30 Year resistance

Weeks ago Morgan Stanley Chief Equity Strategist Wilsons said that long-term resistance in the S&P500 around the 3550 level would be very difficult to surpass prior to the outcome of the US election and passage of CARES 2. As he explains "this view was based on very strong long-term technical resistance going back to the late 1980s. "Then, just days later, the index quickly retreated for its first 10% correction in this new bull market, and while last Monday the index once again staged a valiant effort to break through, it was thwarted once again. Of concern to Wilson is that this second attempt occurred on less momentum, "suggesting the correction that began in September is likely not complete." Furthermore, the Morgan Stanley strategist also highlights the lack of a fiscal stimulus deal, election outcome/timing of final results, and second wave of the virus "as the primary headwinds to higher prices in the near term."
So with both fundamentals drivers and technicals limiting stock upside limited, with so many uncertainties over the next month Wilson says that "another 10% correction from Monday's highs is the most likely outcome in the near term before this bull market can resume, at least at the index level." - source: www.zerohedge.com, Morgan Stanley, Bloomberg 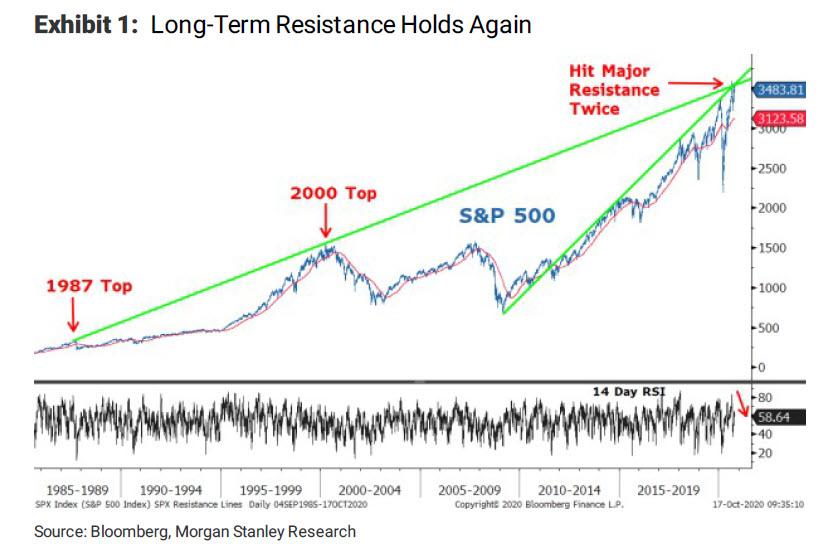