176 days ago • Posted by Valérie Noël

While the cost of the pandemic will only be truly known in years to come, Deutsche Bank's Jim Reid writes that "we can get some good early indications by looking at debt increases around the world." Looking at the latest debt report by the Institute of International Finance, which we profiled yesterday, the IIF suggested that global debt will hit $277 trillion (365%) by the end of 2020 up around $20 trillion over the year (just shy of the annual size of the US economy). Excluding financial debt (where there is double counting risk), global debt/GDP will go up by 35pp in 2020. The numbers are simply staggering, especially for the 5 nations at the top, which have all seen their debt increase by over 25% (in debt/GDP) terms in just the past year, with Canada's 70%+ increase a truly staggering number - According to Jim Reid: "There is no such thing as a free lunch and someone will have to pay. Whether it will be bondholders (negative returns) or tax payers, or a combination of the two, it will likely be a big story for beyond the euphoria year of 2021."source: Deutsche Bank, IIF 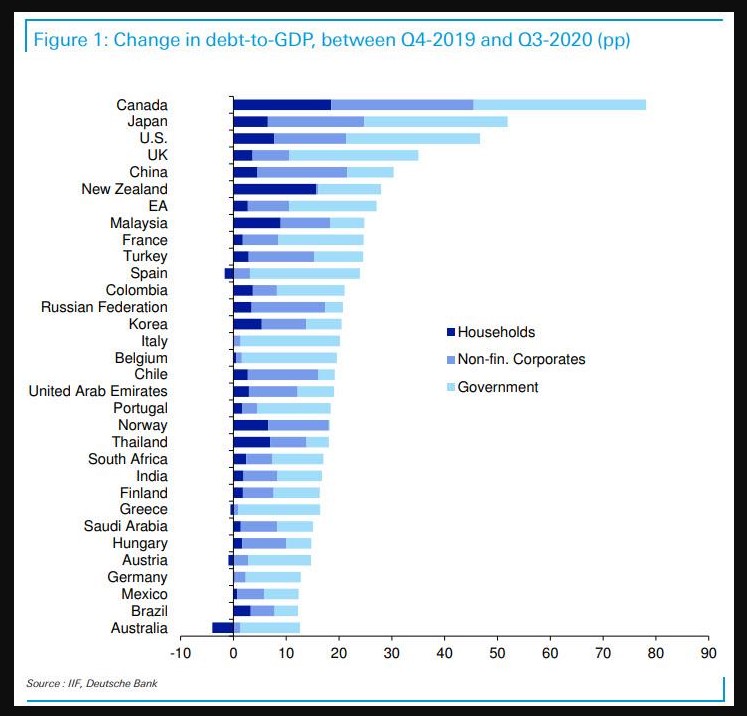