We have all witnessed a major tech sell-off occurring this past week. However, are all technology stocks victims of this trend?

What is happening with the tech stocks?

The market narrative we have been seeing lately says that investors no longer favour ‘tech’ as a sector and have switched to value stocks among others. With inflationary pressures, interest rate risk, and a flip towards post-pandemic winners like commodities, cyclicals, energy, materials, and infrastructure, it makes sense to see a slowdown in tech.

The tech heavy Nasdaq is clearly trailing behind and investors are saying look, we are going to cash in on gains seen with covid-beneficiaries stay at home stocks such as Zoom, Peloton, and PayPal and invest the earnings into assets that might benefit from a new climate we are about to enter.

However, not all tech is doomed. While growth tech stocks are getting slammed, other trends have settled in, singling out more nuanced outcomes. Think about how a chip shortage could generate more investment from Samsung and Intel and re-jig the chip pecking order.

Streaming is not going to die just because people go back to the office and players like Roku aren’t signaling a slow down in recurring revenue from their new usership. What I mean is that perhaps we should talk about a tech rotation within tech. Think about Airbnb and Lyft/Uber which are tech companies and could most likely win from the reopening trade.

Coming up we explore these 3 categories of tech that could stand out from the rest of the sector amid the flip to reopening trades:

Healthcare technology: ecosystem yet to materialize

We have witnessed a sell-off in growth tech firms, but what of the healthcare technology side? There is a mixed bag performance this year as shown below with firms like ACCD and TDOC struggling to make up for lost ground and HCAT and PGNY starting to climb their way back up. According to data at Bank of America most companies in the health IT space saw a rapid multiple expansion early during the pandemic but that they have contracted on average since then.

PGNY is a performer relative to its group mainly because it relies on in-person contact which it will continue to benefit from as restrictions are lifted. From a big picture standpoint, the healthcare tech space has a lot to gain and both CAGR rates and TAM figures are inspiring. The healthcare IT ecosystem is in somewhat of an early stage though. Since healthcare is positioned in such a way to leverage technologies like AR and VR to provide services, its applications in the future are hard to determine exactly but a much deeper rout is less likely. 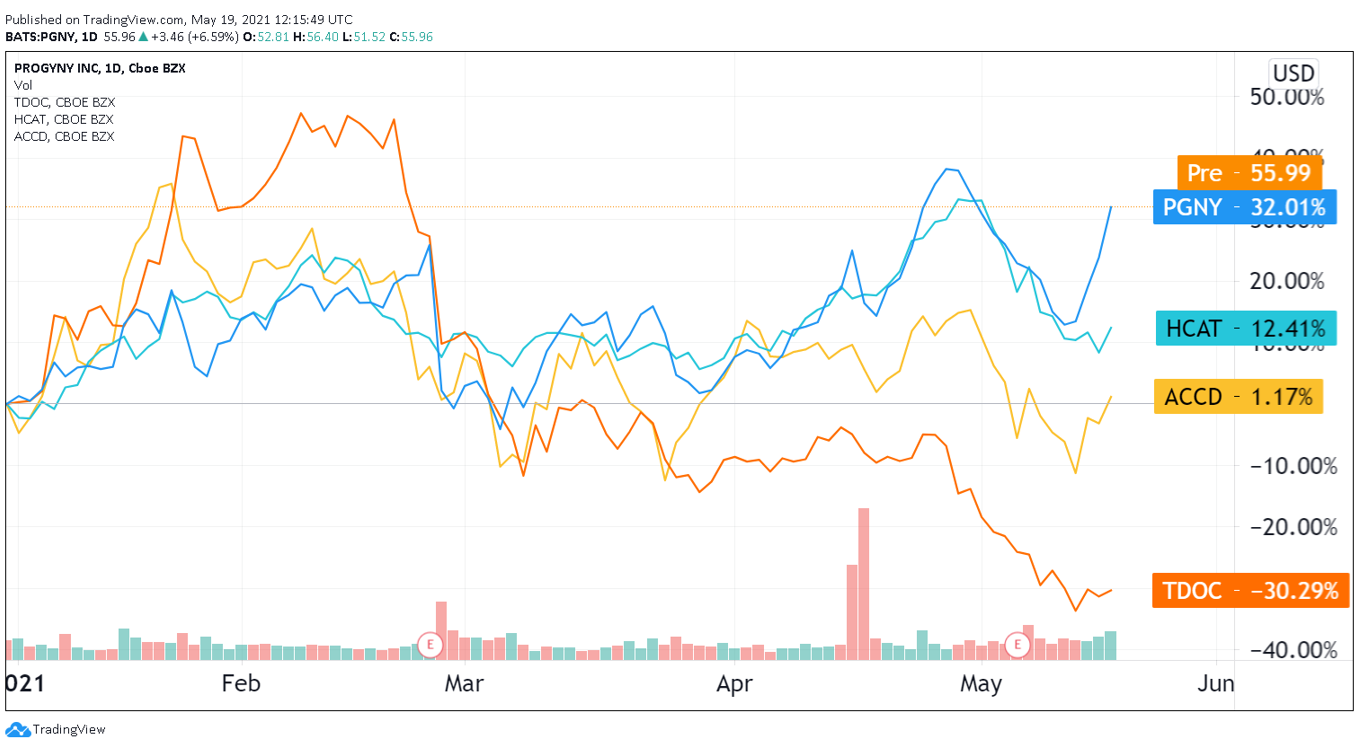 Clearly this is related to the covid era phenomenon, something which could be a spring for the rest of the year. Despite this, biotech stocks have tumbled a bit since February with the SPDR S&P Biotech ETF down nearly 30%. While this is a reality, Mizuho and Jefferies analysts have identified some drivers behind a potential upswing. This summer is highly anticipated in the sector with major FDA verdicts on Biogen’s Alzheimer’s disease therapy drug, and the next phase of CureVac’s vaccine which could see CVAC potentially experience a major price upswing.

Since a lot of what biotechnology is aiming to do revolves around building the future (think Genomics) it makes sense to see firms like Crispr and Editas Medicine still struggling to get much grip on the markets,especially a market that favors clear cashflows and forecasts. But their recent slowdown does not mean we should expect them to tilt over perhaps the contrary is true now.

FinTech is also a broad industry so we’ll simplify to payments and e-commerce. As stores begin to open their doors and customers flood shops and restaurants, e-commerce will see a pullback likely to occur due to less online sales. Buy now pay later (BNPL) payments however are actually addressing a niche need for a variety of reasons and saw Japan’s BNPL services quadruple since 2016. A trailing five-year CAGR equal to 35% indicates more to come, and this service should continue to generate growth with momentum outstripping the e-commerce market growth in 2021.

A major hurdle to BNPL could be institutional banks who are beginning to awaken to this growing business model. BNPL fintechs will need to position themselves in such a way to white label their technology to banks to profit from that move, or find new ways to ramp up customer acquisition. All this to say that while e-commerce still has room to grow, BNPL could present a more lucrative path forward from a customer adoption standpoint and post-covid world viewpoint.

Looking at where the new money is going and where the exits were in Q1 2021 could be indicative of what’s in the tech demand pipeline. The risk to this approach is that young IPOs have too little cashflow history to intelligently predict if they’re going to flop or not, but on the other hand, VC money is usually funneled into industries that VCs expect returns from... initial investment trends can point towards a meaningful direction in 2021.

According to the quarterly report by Silicon Valley Bank, PitchBook and other partners, life sciences continued unabated with a record high invested in Q1, building on a renewed interest in vaccines and antivirals. Furthermore, the tech sector is on an up ramp in VC land. Q1 saw $57 billion invested,which was the highest quarterly amount invested on record (see below). Biotech Q1 tracking exceeded 2020’s record shattering year, Fintech investment is on pace to set new records, and AI remains in vogue.

Despite the enthusiasm, driven in part by the SPAC frenzy, it must be noted that while we are seeing some record shattering figures for the quarters, there has been a skew towards very large deals. This means that in Q1 2021 less deals made up the public listing pool but weighed in more heavily suggesting a slow down in the quantity of investable stocks. 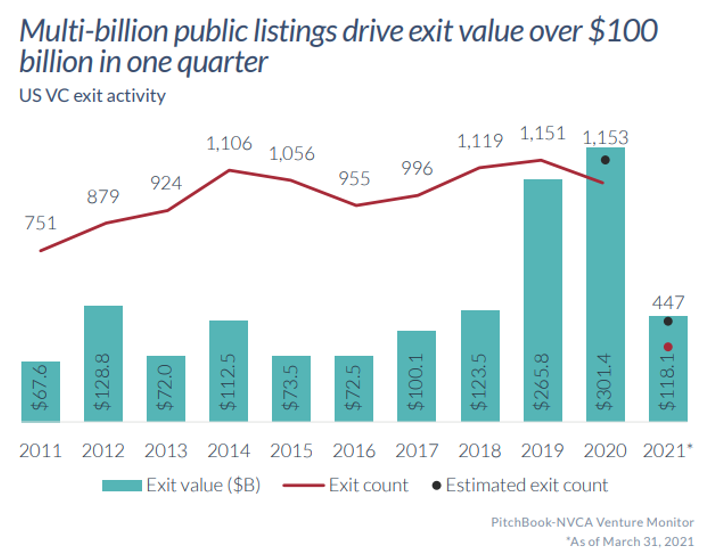