Alibaba tries its luck on the metaverse

Alibaba launched its first metaverse shopping centre at the end of May, just in time for China's 618 shopping festival, which officially started last Tuesday and will end on 18 June. 618 represents the 18th of June, the birthday of JD.com, one of Alibaba's biggest competitors.

Of course, all the Chinese e-commerce giants are participating in the event; numerous promotions, 'red packets' and various commercial advantages are being distributed to encourage Chinese consumers to consume.

Moreover, this year's 618 comes at a key moment for China's tech giants, when rumours suggest that the government crackdown is finally coming to an end, and that the Chinese authorities will throw their weight behind reviving China's growth, which has been brought down by a strict Covid policy.
One wonders, then, if the launch of a mall on the metaverse could be the point of reflection towards a better future for Alibaba.

Alibaba has recorded its slowest growth in history

Alibaba recorded its slowest growth in the first quarter of this year due to the Covid disruption. Yet what the company offers remains favourable under pandemic conditions. It is worth remembering that the months of pandemic restrictions in the US have boosted the sales of US tech stocks, while their Chinese counterparts have suffered from a heavy government crackdown during the same period.

As a result, Alibaba posted the slowest revenue growth in its history last quarter. Even the latest quarantine measures in Shanghai did not prevent Alibaba from suffering from a decline in online shopping for its two main Chinese platforms in the quarter ended 31 March. Weaker economic growth, a disrupted supply chain and logistics have weighed on the company's business.

The company's total turnover increased by 9% in the last quarter compared to a year ago.
Investors are therefore hoping that the 618 results exceed analysts' expectations to signal an improvement in the trend and to give a boost to Alibaba's share price, which has been trying to break its negative trend in recent weeks.

There's nothing like a virtual shopping mall when you're locked up!

Many countries have abandoned strict pandemic rules in 2022, but China has doubled its zero Covid policy since the beginning of the year.

Even if recent containment measures are relaxed, the risk of further containment in China remains real and puts inevitable pressure on many retail businesses. In this sense, Web3 is becoming an increasingly promising alternative in China, where companies could boost sales, meet consumer demand, and build and maintain a relatively close relationship with their customers even if physical shops remain closed or threatened with closure.

As a result, Alibaba's Taobao is not shy about getting its name out into the metaverse. From its VR Shopping Buy+ programme to the virtual avatars of TaoBao Life, this fully immersive metaverse shopping mall is an interesting Web3 development for the Chinese consumer. 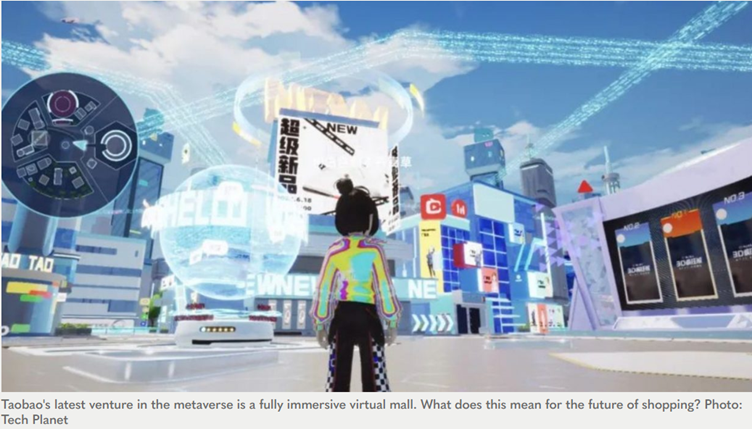 We all have a clear idea of what a shopping mall on the metaverse would look like. It is a giant virtual space, where shoppers will be able to guide their avatars through 3D shops and engage in a variety of interactive activities using their smartphones.

One can only be half satisfied with the idea, but the latest restrictions in Beijing and Shanghai will inevitably lead to a growing interest in an activity that the Chinese consumer could do from the comfort of their couch: shopping online, in 3D.

Thus, the announcement of Alibaba's new virtual shopping mall takes the concept of Web3 to the next level in China, and seems to be a chance for Alibaba to compensate for its declining sales and boost growth.

Is it time to buy Alibaba?

Alibaba has lost nearly two-thirds of its valuation since its high in late 2020. Government crackdowns have been the main reason for Alibaba's fall. While US tech stocks have hit all-time highs due to the pandemic-driven online boom, Chinese tech stocks have taken a beating mainly due to government pressure on their highly profitable business. 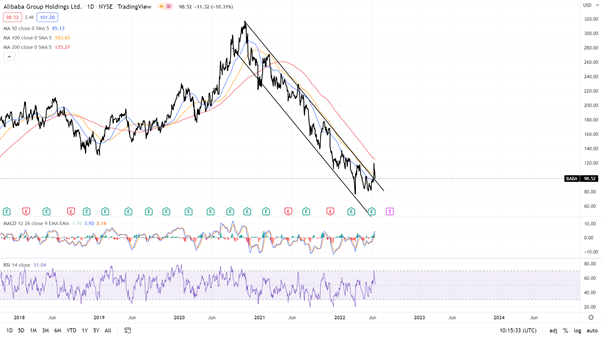 Today, the pressure seems to be easing, yet the government threat is ever-present. Among them, changes in security rules and the government's willingness to migrate data to government-backed entities are among the main threats to Alibaba's most profitable advertising and cloud computing business.

In addition, Chinese authorities last week denied rumours that the long-awaited ANT Group IPO would be revived, warning that Alibaba's battle with the government is not yet won.
Nevertheless, a growing number of investors are now looking for attractive buying opportunities in Chinese technology stocks.

While the contentious management of the Covid pandemic remains a major risk to China's growth, and to macro-sensitive sectors such as retail, the end of government crackdowns, increased economic and fiscal support from the Chinese authorities, and continued improvement on the Chinese technology front may finally bring the most innovation-hungry investors back into Chinese equities. If so, Alibaba will certainly be at the forefront of a long-awaited return of funds.