Amazon: is it the right time to buy the dip?

Amazon has rebounded more than 20% in the past two weeks, after losing nearly half its valuation since last July, when the share price began to fall on fears that the US Fed's tight monetary policy would hit technology stocks and that the end of the pandemic would hurt the company's online business and slow its growth.

The massive and persistent sell-off sent Amazon's share price below the long-term positive trend, and raised the question of whether it was time for investors to return to Amazon at current levels.

The 20-to-1 stock split has been one of the factors driving Amazon's share price over the past two weeks, but the upside potential is not limited to the split alone!

Why has Amazon been hit so hard?

Amazon's price fall started earlier than its FAANG peers (Facebook, Apple, Amazon, Netflix and Google), but the end of the pandemic boom and the prospects of tighter Fed policy, higher interest rates and the end of cheap liquidity have weighed heavily on most technology stocks.

As a result, Amazon has lost half its valuation in less than a year.

In addition, the company's investments did not go in the right direction in Q1 2022. Amazon posted a rare quarterly loss of USD3.84 billion, entirely due to a USD7.6 billion hit from its equity investment in Rivian Automotive. While the Rivian flop is a factor that Amazon could not have controlled, its exposure to the controversial company has had a severe impact on its finances.

As a result, Amazon reported a net loss of USD7.56 per share last quarter, well below analyst expectations.

AWS, which is Amazon's highest-margin business unit, grew 37% year-over-year and generated USD18.3 billion in revenue in the first quarter.

Amazon said that AWS' growth was driven by new customer engagements in sectors such as telecommunications, aerospace, sports, technology and healthcare.

Unfortunately, AWS was the only one of Amazon's segments to report a net operating profit for the quarter and offset the loss of revenue in other areas.

But fortunately, AWS is a leader in the cloud computing industry. And cloud computing is a fast-growing sector that offers Amazon the opportunity to increase its revenues satisfactorily for years to come.

A report published in May found that Amazon Logistics had a 22% share of the package delivery market last year, more than FedEx, which had about 19%, and almost as much as UPS, which had 24% of the market. 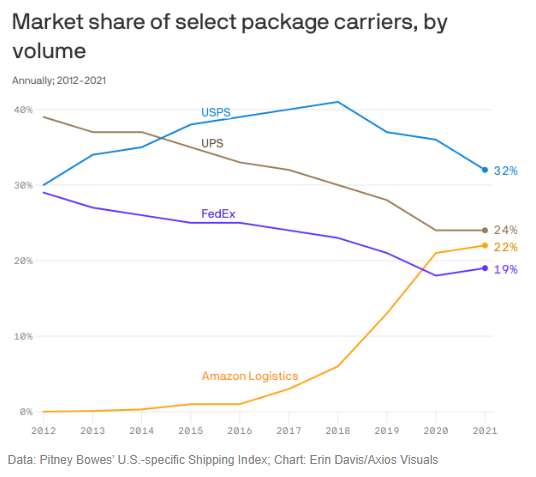 The evolution of the US parcel delivery market (source: Axios)

Today, Amazon has only 12% of the market in terms of revenue because of its free deliveries, compared to 33% for FedEx and 37% for UPS. However, Amazon Logistics is growing rapidly, and is looking to invest USD1 billion in other logistics companies as part of its new venture capital programme.

Based on conservative estimates, Amazon Logistics is worth between USD30 and USD35 per share on a stand-alone basis and has a market capitalisation of USD310 billion. This arm of the company has the potential to triple over the next decade and reach a valuation of USD1 trillion by 2030.

Amazon.com opened its first physical clothing retail shop in May, to capture the flow of customers venturing into the shops after the relaxation of COVID-19 restrictions.

Customers who buy on the Amazon app will also have the opportunity to try on their selections in the physical shop. The online-offline synergy should help Amazon gather more information about its customers to improve its services in a world where the barrier between the physical and virtual world is disappearing.

Dare to buy the dip?

As recession risks emerge and the sell-off in technology stocks continues, some investors are thinking of taking advantage of the falling prices to return to the promising stocks of the US technology giants.

The prospect of higher interest rates and fears of a global recession remains a threat to technology companies. However, from a technical perspective, Amazon has experienced a significant price correction, making it an attractive buy target around the base of its long-term uptrend.