What happens when one is highly leveraged, trading on swaps, and a sell-off occurs? This story explores the recent $30 billion firesale that Archegos Capital Management suffered.

An unfortunate series of events…

Archegos Capital Management is under the spotlight because the family office, run by ex-Tiger Management investor Bill Hwang, was forced out of long positions in stocks that suffered a recent sell-off. The firm leaned heavily on over-the-counter swaps to build its exposure to high performing covid-era stocks, but cratering share prices sent the company into a pickle and one domino hit the next as shares plunged.

When the firm was margin-called Friday, it failed to the meet the minimum requirements thus putting prime brokers in a difficult position to off-set potential losses. Institutions forced Archegos to liquidate through unregistered trades as they desperately attempted to quickly clear their positions and minimize losses. 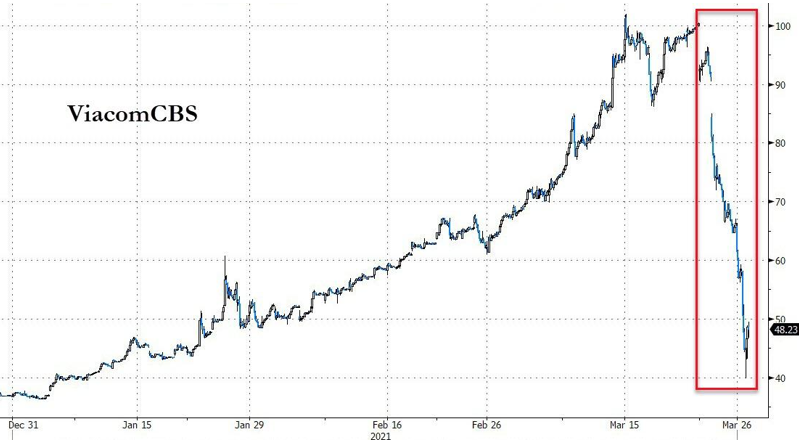 This story matters from a market standpoint as the woes originating from the Archegos situation reinforces the idea that there is more to beware of on Wall Street than leverage. That Archegos leveraged 5 times its position is overshadowed by other stories (think Long Term Capital Management’s 25x leverage!), but that highly concentrated positions, and little SEC filing on such holdings were not made more explicit, raises red flags about using derivatives to mask positions.

Maybe more remarkable than a major Chinese tech sell-off is that Bill Hwang is in the news, again. Former Tiger Management investor, Hwang spun out to start his own firm called Tiger Asia, an Asian focused fund. Hwang is now also known for being fined $44 million by the SEC in 2012 to settle civil allegations that his fund engaged in insider trading of Chinese banks stocks. Moreover, he was later banned from trading in Hong Kong for four years in 2014.

The use of swaps is what enabled Archegos to both maintain anonymity and hold more than 10% of a company’s securities despite the SEC requirements to disclose portfolio information if ownership exceeds 10% of a company’s outstanding shares.

Do swaps present market vulnerabilities? Is this massive sell-off an example?

What this meant for brokers Nomura and Credit Suisse…

With Archegos failing to meet margin call requirements (add cash, or collateral to a leveraged trade), partners Nomura and Credit Suisse were forced to sell Archegos’ securities to recoup what was owed to them. These banks are prime brokers meaning they process the funds’ trades and lend cash and securities for short selling, or trading on margin.

Because of the major sell-off and loses from selling positions at a discount, Nomura said this morning that it was subject to a significant loss ‘’arising from transactions with a U.S. client’’ i.e., Archegos—a loss on a claim of $2 billion.

Revealing that it has a $2 billion claim against Archegos plunged Nomura’s share prices 16.3%, as shown in figure 2, and shortly thereafter, Credit Suisse followed suit releasing a statement saying, “a significant U.S.-based hedge fund defaulted on margin calls made last week by Credit Suisse and certain other banks... [I]t could be highly significant and material to our first quarter results.” Credit Suisse showed a 14% nose-dive.

As of the market open earlier today, Credit Suisse shares were down 16% while its bond spread widened. The Swiss bank still grapples with repaying investors in four supply-chain funds linked with Greensill. The loss for the bank is now estimated at around $3 to $4 billion. As for Nomura, the reputational risk is not as high and analysts see it covering the $2 billion loss given its profitability.

The reason for this downfall is because these prime brokers became involuntary principals as they owned shares outstanding on leveraged swaps—when the client cannot meet the margin call requirements, the brokers incur the risk and the loss. 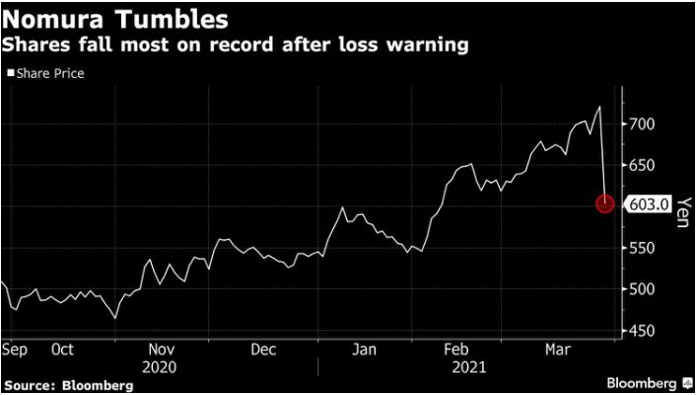 What is going to happen next?

Many questions ensue form the above such as will these stocks fall more? Will there be a domino effect into other stocks? What happened to risk management prior to this implosion, were banks even aware of the risk they were taking? Why did Archegos have so little SEC financial disclosures for such a large firm, such large positions, and should that be allowed going forward?

ViacomCBS and Discovery shares are echoing volatility—data compiled by Susquehanna showed that volatility futures expiring three months from now were hovering 20% above the average level or prior instances when the VIX traded at 20. Barclays strategists say the increased volatility seen in equities capital markets, tech and working from home stocks and the value rotation may hurt funds overly exposed to such trades.

Tencent recently bought back $1 billion shares to offset the liquidation-driven drop in the stock price to take advantage of the lower price and contain investor panic. As of markets opening stocks involved in the sell-off have shown a sort of resurgence from Friday slumps, but volatility remains high just as predicted.

A concern for a contagion effect is made more clear this Monday as banks showcase a slight slowdown in performance as shown in figure 3. However, the contagion effect could be limited and volatility in markets, short lived. Morgan Stanley, Goldman and Deutsche Bank unloaded large blocks of shares for Archegos, but after this morning’s New York opening bell, other large banks started losing traction with Morgan Stanley dropping yet another 3%, and Goldman 1%.

There’s a widespread selling effect because it is unclear who is involved—this is clearly a fear-driven volatility. However, money managers wonder if other stocks who saw impressive rallies last year, could be subject to similar fates. This week could see more volatility in general as managers adjust their positions for the end of the quarter. 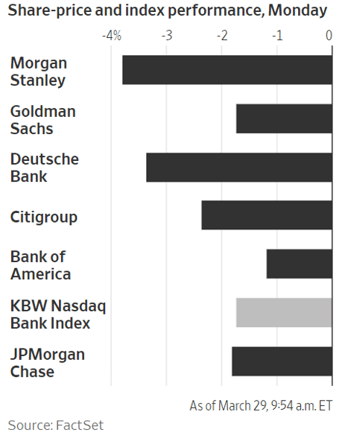