Are US equities heading into a storm?

Is there a storm brewing in US equities? As you know, investors face a dilemma. The pandemic has really changed markets. The S&P 500 is trading over 30X P/E, treasury yields are near zero. Finding rich prospects is hard.

Valuations at an extreme

We covered a lot of market action this past year and our live wires indicate time and time again that the surge in valuation across the board has ticked up. Even in the startup world, late stage startups have seen a large surge in post-money valuations. There’s just more money in the market than before and could be looking at new normal that hasn’t standardized yet. The risk of a correction could be brewing but valuation corrections doesn’t exactly mean market pullbacks, it just means a constraint on returns. 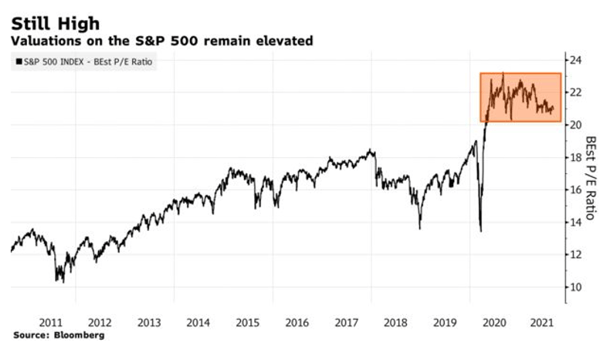 Price to sales ratio index jumping to alarming levels much like we saw during the dot com era, is happening as we speak. If sales or revenue is low, the price to sales ratio will rise. In the dotcom era we saw a lot of pre-revenue firms going public—much of that has happened with SPACs in 2020-2021.

Cheap financing has made it much easier to raise money, and sectors like M&A and Venture Capital have been able to borrow their capital at competitive rates and so on and so forth. Here are some valuations related livewires you can consult that further illustrated this market trend.

High valuations have increased the market’s fragility and if there is a negative development, it could generate shocks that lead to de-risking. Morgan Stanley’s equity strategist Mike Wilson argued that the mid-cycle transition started in March. Industrials are neutral right now because they are economically sensitive but remains confident about capital expenditure and infrastructure spending bill.

We also all know September is historically a bad month on the S&P 500 so there may be an overstated paranoia around a correction—or that at least, when there will be a correction, it could just be your regular September pull back as shown in the following graph. 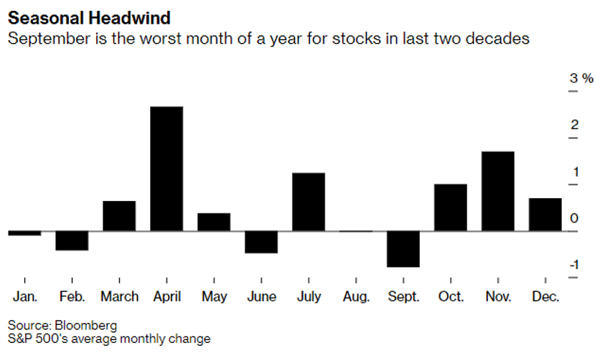 A place of differing viewpoints here is the retail influx. We saw a massive flow into US equities and ETFs this summer continuing on the trend triggered by the pandemic. These guys plowed $30 billion of cash in July and August alone, the most in a two-month period. JPMorgan thinks they could keep markets stable as long as money policies persists. This makes me wonder about the influx effect seen with Bitcoin too, especially from small investors. At a certain high price range it becomes psychologically complex to sell, especially when buying at a high price.

SKEW raged up ending Q2, and fell in Q3.

The SKEW index is a measure of potential risk in financial markets. It is a proxy also for investor sentiment and volatility. The index increases general awareness among investors and when the slope is up, so is the chance of a black swan event.

The SKEW right now has been trending upwards and ‘’pundits’’ have made a lot of fuss pointing to an imminent crash which never took place. More recently, the SKEW index has fallen quite sharply, a phenomenon that right now could be more spooky. A rising SKEW means people are paying a premium for downside protection. A falling SKEW signals folks are paying a premium less eagerly for downside protection.

A time for Prudence?

Charlie Bilello who is a well known critic of the SKEW index asked yesterday, if now is a time for prudence. He says that we’ve seen a nice bull run for the past decade, and especially, that higher returns with lower risk has been the name of the game. In fact, the Sharpe Ratio, which measures risk-adjusted performance, exceeded 95% of other period and is more than twice the historical average.

He also makes the point that much like high valuation seen above, it does not mean that we will have a crashing market just because an index or a valuation average is at a new high. Nobody knows what happens next, but if experience has shown anything, it’s that when the crowd signals for prudence, it’s not a terrible idea to listen. To listen and to act are different things however—next week the world could see new records carved in. There are ways to be prudent in the form of increased diversification, reducing beta, holding more dry powder, or exercising temperance against the FOMO angst we all seem to want to itch.

Jeffrey Gundlach recently said that the economic growth we are seeing is not exactly economic growth, it’s ‘’massive amounts of tools and devices the Fed has used’’. Consumption, as opposed to production is not the bedrock of an economy. In fact, if you go back to first semester economics, GDP is total output, or Consumption, yes, but also investment and government spending and exports less imports. When we consume goods made in Asia with stimulus money, it is more like Asian GDP.

With the Fed’s massive balance sheet expansion, the real fed funds rate is are dramatically negative which means inflation (core CPI) is high-ish. The labor market has also tremendously changed and have effectively wounded small businesses. ISM manufacturing inventories are at an all time record low and housing prices continue to surge because of low cost of capital linked to low interest rates.

Another point of concern with the Fed according to Gundlach, is that the Copper to Gold ratio bursting away from a falling 10 year yield, is a proxy for Treasury manipulation. The two usually move side by side, but in the next graph, we see the inverse. It might be time to look at European stocks.

We could be in the middle of an inflection point for the dollar, well not this year perse if we assume the dollar has a seven-to-eight-year cycle, but in the coming years a weakening dollar could lead to a new investment scenario favoring emerging markets. The dollar falling to the downside is a huge pivotal change for American power status around the globe.

We posted a livewire earlier today looking at MSCI EM vs MSCI world indicating that going long on EM as Gundlach suggests, is not a terrible concept. EM has underperformed DM this year in a way that looks rather extreme, but could present an entry point for a medium term outlook. Two previous moments of a 20% underperformance in 2015 and 2018 were followed by a 10-15% EM outperformance in subsequent months.