Are US stocks really so expensive?

The S&P 500 Index keeps delivering all-time highs. Is this rise justified by the fundamentals?

The major U.S. equity indices continue their inexorable rise. The S&P 500 is up more than 80% from its March 2020 lows. Over the last 10 years, the annualized performance (including dividends) is over 14%.

These figures call for some caution when it comes to investment planning in the coming months. What can we say about market fundamentals and key risks? Let us take a closer look at the factors that raise many questions and could create volatility in the second half of the year.

The sharp rise in equity prices since the March 2020 lows has pushed valuations to their highest levels in 20 years (see chart below), causing many observers to fear a repeat of the "bear market" we witnessed at the beginning of the century. 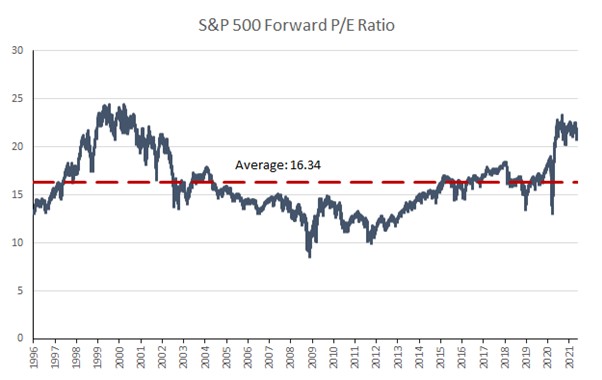 The strong rise in the S&P 500 index over the past 12 months is partly explained by the upward revision of earnings growth expectations. And that earnings recovery is indeed well underway, with a 49% increase in the first quarter of this year. Nevertheless, stock prices have risen much faster than underlying earnings so far, which explains this rise in the price/earnings ratio.

At 22 times expected earnings for the next 12 months, the S&P 500's P/E is well above its historical average (16.3x). However, the market is already slightly cheaper than it was at the beginning of the year and the multiple should continue to decline as earnings recover. With earnings growth expectations of around 30% in 2021, multiples should continue to normalize without jeopardizing the outlook for stock market gains - although we should expect a more moderate increase than in 2020. It should also be noted that periods of accelerating earnings have often coincided with an outperformance of value stocks, which are more linked to economic dynamics than growth stocks.

Ten-year yields quickly rose above 1% at the beginning of the year before reaching 1.73% at the end of March. This rise created some volatility in the equity markets as investors feared a similar scenario to that of 1994 or 2018.

However, these fears have dissipated somewhat in recent weeks. The U.S. Federal Reserve has insisted that it interprets the recent rise in inflation as a "transitory" phenomenon, which implies unchanged policy rates until 2022 or even 2023. Of course, the asset purchase program could be reduced at the margin if economic growth accelerates.

However, the market seems to be taking on board the fact that the Fed cannot afford to cut the program too drastically; indeed, the huge issuance of government debt to finance the U.S. fiscal stimulus program will have to be partly absorbed by the Federal Reserve's balance sheet. The situation is therefore very different from those of 1974 or 2018, periods that required a drastic increase in key rates by the Fed.

During the second quarter, ten-year bonds were little changed. Certainly, a strengthening of inflation expectations could lead to a gradual increase in long-term rates. However, recent history has shown that this type of configuration is generally not unfavourable to the equity markets.

It is not just stocks that are breaking records. The U.S. real estate market is booming, with the S&P/Shiller price index up 13.3% over 12 months in April.

The context is indeed very favourable for "brick & mortar": mortgage rates at their lowest (thanks to the Fed!), a strong increase in demand (demographics, abundant savings, lower unemployment, telecommuting), the decrease in inventories (partly due to the pandemic) and the increase in the cost of construction materials.

But this strong price appreciation is causing some concern in the equity markets. Indeed, the last real estate bubble (2006-2007) was the trigger for the great financial crisis of 2008. Will we see a similar epilogue?

Certainly, the fundamentals described above should continue to support demand and prices. But there are important differences with the last housing bubble. First, there was an oversupply situation at the time and credit conditions were far too lax. Currently, mortgage lending conditions are much more conservative and, more importantly, demand is outstripping supply, which should prevent a collapse like 2008.

Finally, it is unlikely that double-digit price increases will persist. The surge in lumber prices already appears to be coming to a halt and a return of labour to the job sites should allow home stocks to better meet demand.

Many investors have interpreted this speculative frenzy as a precursor to the bursting of many financial bubbles.

On this basis, the U.S. housing market does not appear to pose a systemic risk to the economy or financial markets.

After SPACs, WallStreetBets and cryptos, time for quality?

The first quarter was marked by euphoria on the part of investors. This is evidenced by the frenzy observed in certain highly speculative market segments such as SPACs, where new issues broke all records in the first four months of the year.

Another favoured strategy is the hunt for securities with a relatively high level of "short" interest. GameStop and others like AMC recorded record trading volumes, thanks in particular to the support of forums such as R/WallStreetBets. Similar sentiment was to be found in the credit markets, where less liquid securities with poor credit ratings were favoured by many traders. But the biggest frenzy, of course, was seen in cryptocurrencies, which saw unprecedented appreciation. The boom in the asset class may have peaked with the Coinbase IPO.

Many investors interpreted this speculative frenzy as a precursor to the bursting of many financial bubbles. What is the situation today?

It seems that the more speculative segments of the market are significantly less buoyant than in the first quarter. With the SEC on the verge of legislation, new SPAC issuance is at a standstill and the ETF invested in this segment is down 30% from the highs. As for the interest in lower quality securities, there has been a clear stall since the end of March. Finally, crypto-currencies have just experienced another crash - without affecting sentiment on the rest of the risky assets. As the chart below shows, bitcoin and cryptocurrencies represent only a tiny fraction of financial assets. Therefore, the risk of contagion seems minimal. 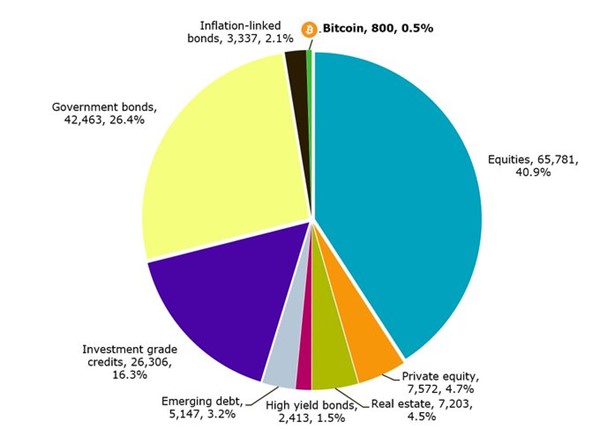 Graph: The global portfolio of financial assets (in billions of dollars and %)

US equity markets are trading at high valuations and there are micro and macroeconomic signals that call for some caution.

However, the general context at the end of the economic crisis continues to favour risky assets: consumers have built up substantial savings, the banking system is relatively solid (unlike in 2008-2009), earnings growth is sustained, real interest rates are in negative territory and the new US administration is in the process of implementing the largest fiscal stimulus plan since the post-war period.

Moreover, it is likely that the financial markets have shifted to a phase of the cycle that is more favourable to quality stocks and in which investors have good visibility.