Is big tech back?

The market’s focus is shifting from inflation and higher yields to global recession risks. Will big tech outperform the broader market in this environment?

Markets have oscillated between inflation fears and growth fears for months. But recently, the latter is taking over as cracks are starting to appear in the US economy – and elsewhere.

Since the last FOMC meeting in June, inflation and growth have mostly surprised on the downside. The new-orders and employment components of the ISM manufacturing gauge are both contracting, and the ISM services index released on Wednesday continued its downward trend, signalling a downshift in the pace of growth. The contraction in real personal spending also disappointed, coming in below expectations.

Moreover, the June increase in the University of Michigan’s long-term inflation expectation measure — one of the primary indicators the Fed is watching — was revised down in the final reading, though still at an elevated level (3.1%). However, the market’s equivalent – the 5-year breakeven inflation rate – has been declining continuously, from March-end highs of 3.6% to 2.6%. This, together with the recent drop in gasoline and other commodity prices, is suggesting that inflation worries should start to ease, allowing the Fed to readjust its policy at some point.

Bond markets, which often tend to lead stock markets, have been adjusting to the recent economic changes. The yield on longer-term Treasuries (10-year) has declined significantly, receding from mid-June highs of 3.5% to 2.8%, before claiming back 3% on Friday following a stronger employment report. Although the headline job creation number did take markets by surprise, under the hood, the participation rate declined and wage growth decelerated, suggesting the risk of rising inflationary pressures from the labour market is very low.

In the midst of this turmoil, the technology sector has started to display positive momentum in recent weeks as investors appeared to be embracing risk. Traders exited from this year’s winning strategy of buying energy stocks after US crude tumbled below USD100 a barrel for the first time in a month. Instead, they snapped up shares of technology companies and some even delved into some of the riskiest corners of the market – the ARK Innovation ETF jumped 13.7% last week. 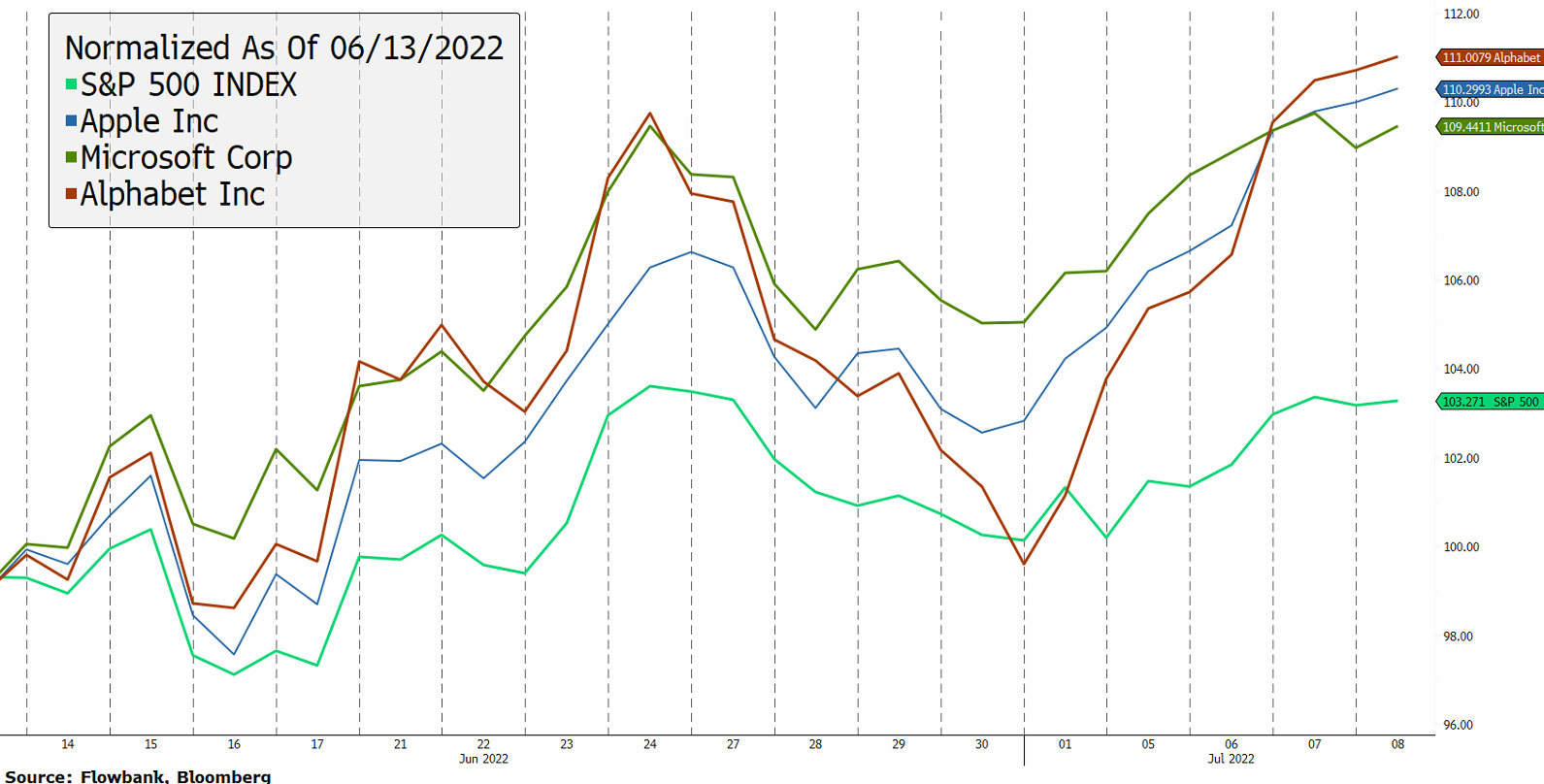 Even though it is too early to tell if there’s a durable shift in the stock market’s leadership, large-cap tech giants like Apple, Microsoft, Google, and chip stocks like Nvidia and AMD continue to be the popular choice among retail investors. The FAANG basket has seen more than USD1 billion in retail inflows over the past 2 weeks.

There are several things that make these stocks attractive. First, they are very successful. Their combined revenue is close to USD1 trillion a year, and their combined market capitalization is close to USD6 trillion. Second, they have strong growth prospects. Many of them are growing extremely quickly, with revenues increasing at a rate of more than 20% each year. And third, they offer investors high returns on investment. For example, Microsoft was trading at USD102 per share at the beginning of 2019. It closed at USD267 last Friday. So, if you bought MSFT shares at those prices you would be up almost 167% since then! So, whether one looks to these companies as part of a long-term strategy or as part of a short-term trading strategy, there is the potential for big gains.

Did the market bottom?

Traders were losing all hope seeing the S&P500 index correct 24% since January and the Nasdaq down 33% during the same period, the worst year-to-date performance for US indices since the 1970s. However, it is encouraging to see that the 200-week moving average level is providing a solid support for markets. The 200-week moving average has historically been a good indicator of when the markets bottom. It correctly signaled a reversal during the 2018 market crash and even the 2020 COVID induced fire-sale.

In addition, the upward move in the relative strength index (RSI) is also quite positive, pointing to bears’ fatigue and oversold levels. Often, when the price is making lower lows, while the RSI makes higher lows, this is considered a bullish signal.

This recovery should continue – though possibly not in a straight line – as tightening fears gradually abate from their current peak, leading the way for a broader market rebound.

In short, macro indicators are signaling a slowdown in the economy. Although the jobs market is still robust in the US, historically employment has been a lagging indicator and therefore risks of negative surprises in the coming weeks are high. With inflation and inflation expectations appearing to roll over, the Fed could readjust its policy faster than expected, taking the pressure off real and nominal yields. Growth worries may take longer to fade, but if growth holds up – in the US in particular – and earnings do well this season, investor sentiment should recover, lifting risk assets. And Big Tech is well-positioned to lead the rally.