Crypto firms want to step onto the system’s main financial railways much to the dismay of incumbent banks. While this matters, big banks have a bigger problem to deal with… Big Tech.

Crypto firms exist in all sorts of shapes and sizes nowadays, and one such form is mounting an attack on traditional players. Traditional banks are well known gatekeepers of their business, and they have every reason to fight off competition, as the law so allows. But two such competitors, Kraken and Avanti Financial Group, have begun to lend their hands to the custodial business, as custodians for crypto assets. However, they want to work directly with the federal bank instead of their middlemen banking partners, partners that hold accounts at the fed on their behalf, accounts that provide access to transactional benefits with the central bank.

The pressure is not just coming from Kraken and Avanti however, but from fintech 2.0 players and now, big tech players too. Big banks are not happy about this. They’re against crypto players’ involvement on the premise that they are poorly regulated (see argument in last section). To big banks, it’s plain old nonsense that banks should play by different regulatory rules! The counter argument from crypto firms is that these are distracting arguments, that they too are regulated, that the only reason big banks are fighting this is to protect their business models, and not the morals of fair play. Later we see that banks are correct about regulation, but specifically when it comes to big tech, not crypto.

Maybe big banks are insecure about the way they will make sustainable profits off crypto going forward. They would like to stay sole custodians, and they know the crypto space needs their help in achieving their connection to the real world. Afterall, the crypto space cannot really survive without an influx of fiat to back things up like stablecoins and also, crypto players need to be able to convert cryptocurrencies into fiat to stay legitimate. The next step for crypto players is to deal directly with the central bank and cut out the middleman. We cannot know just how liberal central banks will feel about dealing directly with decentralized exchanges, but we know from Deutsche Bank researchers that about 85% of the world’s central banks are developing CBDC projects.

Oh, how the tables have turned. The market capitalization spread between the 7 biggest tech firms and the top 200 banks combined shows that covid-19 worked as a huge leverage for technology players. The first graph shows this spread, a spread that makes more sense when looking at valuation ratios first. Big techs trade at price to book ratio much higher than banks. Looking at the top four of each two sectors we discovered that on average big tech churns out an average 17.61X price to book ratio (or a median of 11.61X if you prefer) versus a meager 1.31X average over at the big four banks. 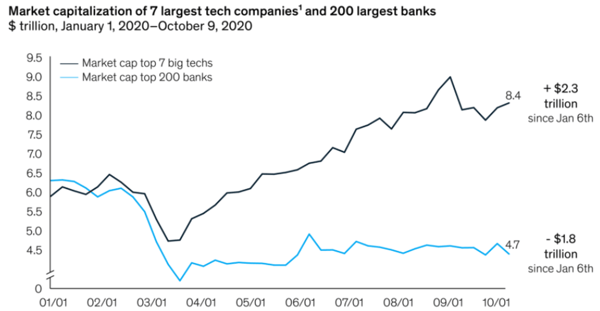 A low P/B ratio could just be an undervalued stock, but in the case of the largest banks, it’s probably more a question of the value investors put on what the company is selling, or owns. Investors think cloud services and iPhones are much sexier than car loans, and mortgage-backed securities. In financial jargon, bank fundamentals also indicate low returns on equity and low expectations for growth (but clearly not profitability!). The following graph illustrates these fundamentals. 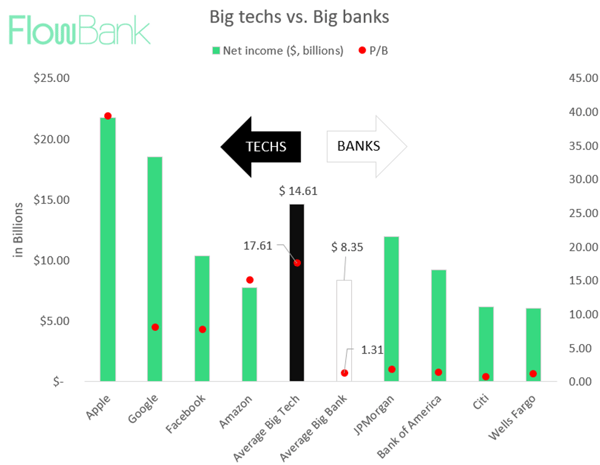 It used to be that big banks and big tech would compete on the grounds of their exclusive businesses, but things have changed. Now they compete for customers. If big tech was not already big enough well say hello to the last frontier: financial services. Here we are with Amazon offering $1 million credit lines to US small business merchants underwritten by Goldman Sachs. Facebook started enabling small businesses to set up digital storefronts on Facebook and Instagram. Microsoft partnered with Finastra to streamline digital transformations for up to 8,500 financial service companies using Azure. Apple has a gamified program to help customers improve their credit scores and Google Pay reported 820 million transactions in 2020.

Big tech and banking: not replacing—re-defining.

Maybe we went too far, maybe it’s not as straight forward as big techs becoming fintechs or big banks disappearing like dinosaurs. It’s about power, and it’s about who wields it. So now we turn to one of the world’s most impressive markets; the cloud space, a $150 billion market. The provision of cloud services has put Amazon, Microsoft, and Google, right at the top of the list for pricing power and financial control over banks going forward. This is because the cloud is the virtual delivery circuit of computing devices used everywhere in financial services. 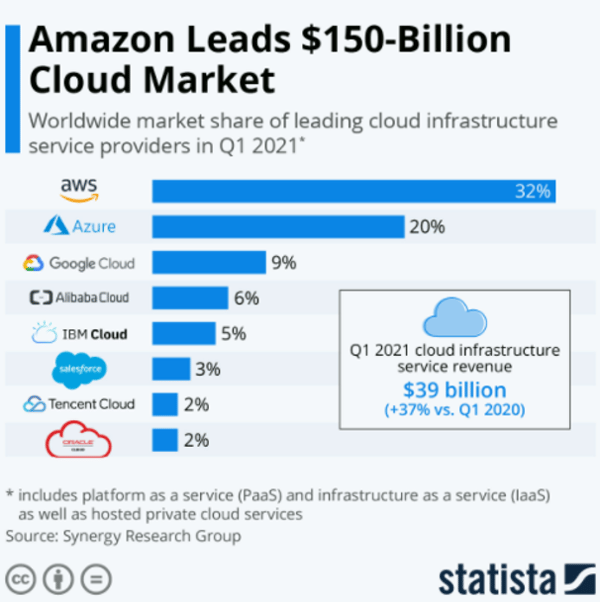 In 2020, the Bank of England showed that 70% of commercial banks rely on just two cloud providers (AWS and Azure). We have to face the truth; big banks now rely on big tech to run their operations efficiently, they are defined by big tech. The type of concentration seen just on the cloud services side also speaks volumes to that. A failure in one of those two top providers (AWS and Azure) could lead to serious black swan event, which is also why big tech has not become a fintech per se, but rather a sort of infra-structural monolith. Here is a breakdown of how big banks use their cloud services: 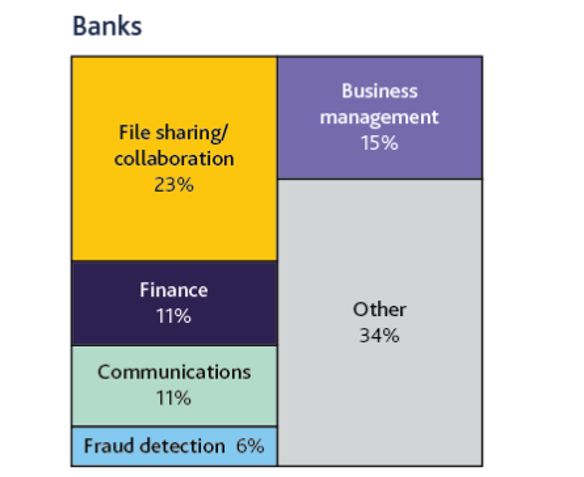 Isn’t it fascinating? Big techs have been able to wiggle their way into banking in such a way that really is quite ‘’unfair’’ to incumbents. But ‘’unfair’’ doesn’t work in capitalism if one innovates and other sits back. Cloud services is a perfect example of this. But you see, the Cloud is not just a product, it’s a tool big tech firms have utilized to exert leverage, whether or not this was their initial intent, and in the defense of big banks, there is something ‘’unfair’’ in how the playing field is ruled right now.

It is ‘’unfair’’ in that Big tech are not normally subject to the regulations and oversights big banks are subject to. This could have just handed big techs a temporary competitive advantage, one not defined by innovation and better products, but benefits they can gain from less oversight. Existing regulatory frameworks like Open Banking, which were aiming to ease competition, may have unintended repercussions as they could create a one-way flow of data that would allow big tech to continue capturing more banking market share. Who controls financial services if big tech controls banks?

A good and pressing question. New forms of digital currencies that do not rely on big banks as a middlemen could disrupt the banking industry forever, more so than cloud services. New forms of currencies promise an easier experience on all parties, but also implies leaving behind other forms of money—a problem for things like sovereign nations. This is actually the very reason in our opinion why the Chinese are making an e-yuan—it is unclear why the Chinese, whose currency is stuck in infancy, would create a CBDC for any other reason other than to directly challenge the US dollar. In other words, some sovereign governments see CBDC as an opportunity.

Big central banks know about this, and are preparing the guardrails to a digital future specifically by playing the game and developing their own CBDC—big banks are clearly not in a position to develop a crypto currency. Anyway, the point in all this is that big banks are in a rocking chair. Banks will not be the preferred railings used to transact digital currencies and they also are not creating their own crypto—in essence they are stuck between new classes of financial structures.

Maybe big bank problems are elsewhere. For now, these are all just threats. Blockchain and crypto-related technologies are still in such a degree of infancy that the industry as a whole could end up being much smaller than expected—at least until the technology goes from an engineering stage to a user friendly and user ‘’habituated’’ stage; people need time to adjust! Think about how some older people still convert Euros in French Francs.

In all however, CBDCs threaten banks because they have the ability to dismantle their service bundling business models, and so does big tech. Banks need to wake up and act quickly. They used to see fintech startups as scenario testers for new products, but the only way out for banks, is in.