Should Bitcoin have a place in your portfolio’s strategy? As we close Q3 we wonder how inflation, slowing recoveries, and potential market corrections in the US will affect returns—does Bitcoin offer a solution to these problems?

You cannot depend on bonds anymore to offset your equity risk—the Fed will want to normalized interest rates in the coming decades, but it is for sure not going to happen in the coming years without causing a house of cards moment in markets. The other problem is inflation rising, making real returns (returns adjusted for inflation) terrible.

Then along comes blockchain capital markets solutions that promise to get the world rid of rent seeking middlemen and inefficiencies, and then Bitcoin (BTC) blows up beyond 2018 levels. Efficient market hypothesis becomes something of a bad word, and investors turn their attention to Bitcoin, much like you are doing reading this article.

Here’s what we see:

The bandwagon logical fallacy of following another’s argument because an entire group of people agree with that argument couldn’t have been more correct with Bitcoin in the aftermath of the March 2020 crash. 2020 returns neared 160%, and 340% year to date which on average translates to an average annual return of 180% since its inception.

From a historical perspective, though a short history indeed, Bitcoin’s risk-adjusted returns look attractive. However lately, it is its price performance that is a top rationale for portfolio exposure though this is less good for diversification efforts and inflation protection which we look at below. 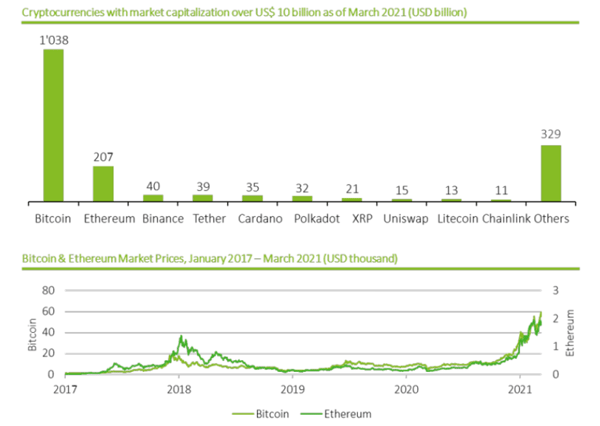 Volatility (risk, or standard deviation) is a big point of contention for Bitcoin and cryptocurrencies. BTC sees large movements on account of ownership concentration and its limited supply. It has produced relatively high risk-adjusted returns despite one of the highest volatilities in the cross-asset space as shown in the following graph: 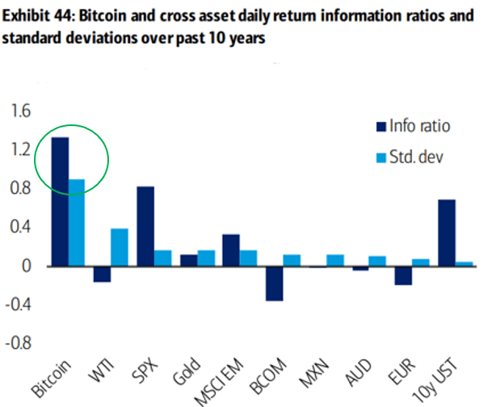 Bitcoin volatility volumes could indicate cyclicality where BTC exhibits similar characteristics to foreign exchange currencies that see capital control and hyperinflation. Standard deviation, which is used to describe risk in financial models, is shown in the following graph to be in a league of its own compared to Gold, Silver, and the Euro. 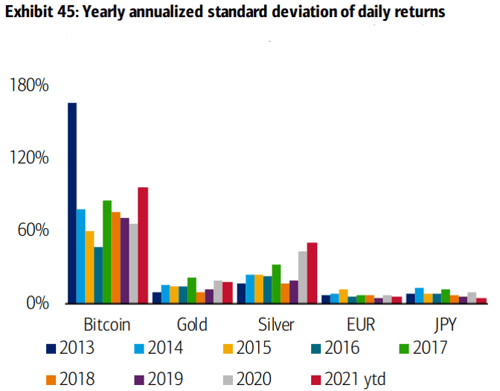 Here is a table showing some of the correlation figures between the top cryptocurrencies, numbers that show BTC is not correlated with others—this is because usually, BTC’s crash is another’s treasure.

If you need to keep your portfolio ESG-friendly, you can drop Bitcoin and Bitcoin mining companies. This is because BTC’s entire network emits 60 million tons of C02, equivalent to Greece’s output. Did you know $1 billion of inflow into BTC correlates to the same C02 outputs as 1.2 million cars? This is because the hash power (the computing power used to resolve encryption) resides mostly in coal heavy Xinjiang in China. Therefore, BTC is tied to Chinese coal production.

One last thing is that risks around money laundering and bribery are fading, and that according to CipherTrace’s 2020 report, total blockchain illicit activities totaled $1.9 billion, falling from $4.5 billion the year before. CipherTrace CEO also recently said in Q3 2021 that only about 1-2% of cryptocurrencies are used for illicit purposes so another surprising truth about crypto to accept.

7. Bread crumbs to know about

Bitcoin has an average 10-year Sharpe ratio of 1.3—a contrast to the Nasdaq index which has a Sharpe ratio of 1, despite lesser returns. The ratio is the rate of return you would get factoring in the volatility (or risk). The higher the Sharpe ratio, the better. Bitcoin returns are also sensitive to increased dollar demand and we know that $93M inflow in BTC can results in a 1% price rise versus Gold which needs an inflow closer to $1.86 billion.

8. Is BTC safe from a global stock crisis?

A market correction talk has taken place lately because Central Banks have been practicing incredibly low interest rates since Q1 2020, so if economies fail to gain momentum amid these multi trillion-dollar stimulus packages, we could be in a rut.

Bitcoin hasn’t yet experienced a global stock market shock like traditional markets have so the first conclusion is that we cannot say for sure that Bitcoin is a proven alternative to other asset classes in the case of a crash. However, because Bitcoin is only lightly integrated with traditional finance and is unable to be forcefully sold to cover financial losses it means that the price of BTC might not collapse because of a stock market meltdown—or if it does, it would be for different reasons.

Bitcoin might be less impacted by a market meltdown as a cryptocurrency because of its inherent ‘’outsider’’ status. It has an edge over traditional markets like commercial real estate or stocks in that lenders will foreclose on those assets but not Bitcoin because simply put, borrowers cannot use their Bitcoin as an accepted collateral.