After banning PayPal in 2016, could Turkey target Bitcoin next? With fears of funds escaping the country and hurting the Lira, Erdogan chose to put a halt to the emerging crypto asset class. What does a falling Lira mean for Bitcoin, and will others follow suit in this type of crypto momentum embargo?

What is going on with the Turkish Lira?

Turkey’s president Erdogan is becoming impatient, to say the least, with the state of the nation’s currency, the Lira. In less than two years, Erdogan has let go three central bank governors, the last one being in a surprise ousting last month. Ever since a currency crisis in 2018, the country has been struggling to balance its politics and economy and Bitcoin seems to be taking a share of the blame today.

On Thursday, the Turkish Central Bank kept rates on hold at 19%. A recent economic expansion in Turkey has exacerbated an underlying inflationary problem the country has suffered from since 2018. The country’s political strain with neighbor Syria, and its contentious relations with the United States has added to the downward pressure on the Lira.

High interest rates were set as a response to the inflation that came with a rapid economic recovery in the second part of last year. Turkey was the only nation after China to show real GDP growth rates in 2020. However, now that other nations are exiting the pandemic’s freeze, and that the U.S. recovery is promoting a rise in long-term U.S. bond yields, more investors are lured towards buying more U.S. dollar assets to the detriment of the Lira and Turkish economy.

With a weakening purchasing power of the Lira, Turkey will have a much harder time paying back U.S. denominated debt thereby shaking the financial stability of the country. This could lead to further inflation from a trade standpoint as Turkey relies heavily on imported oil which are contracts denominated in US Dollars.

The graphic below from the Wall Street Journal shows that during the 2018 currency crisis and in an inflection point seen in 2019, Turkish residents have begun to distrust their local currency and begun to favor foreign currencies instead. 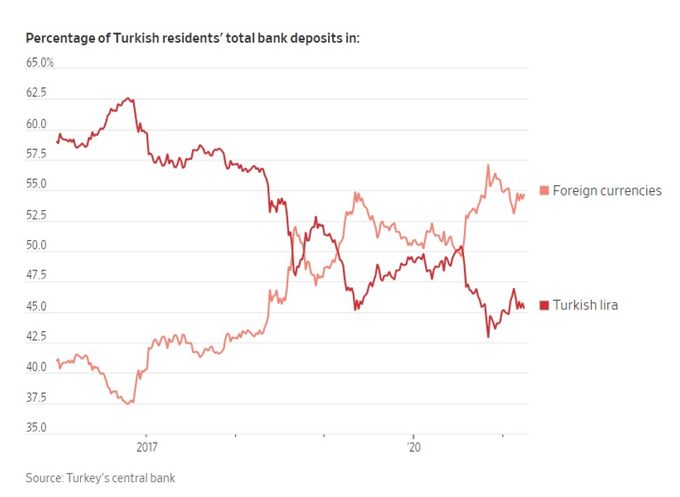 The problem has become further nuanced with the rise of bitcoin around the globe. Cryptos like bitcoin and altcoins are an uncorrelated asset class and an increasingly viable alternative to gold as a currency haven.

Bitcoin’s purpose as a store of value has put fear in Erdogan’s heart who seeks to maintain relative control over his currency, and rightly so, but Turkey (80+ million people) only sees 2.4 million people using crypto as of 2020 which is proportionately insignificant and arguably renders this regulation substantially off the mark.

What does this ban on Bitcoin mean?

Bitcoin is not banned! Not exactly—the new regulation bans the flow of money from payment companies to crypto exchanges or in other words, users will still be permitted to trade crypto through banks, but in such a way that grants the government more visibility, something that could slow down the use of cryptocurrency in everyday life.

The country, much like the United States, is still defining and attempting to regulate cryptocurrency before letting the horse run wild, but their Lira situation is putting added pressure on the fintech climate.

The main issue that experts at CoinShares see with this type of reaction is that it will quickly become an expensive endeavor to police. Any new regulation or statutory law needs backing in the form of a police enforcement and with crypto this simply will not be possible, or at least not without a huge overhaul in resources.

The result of banning crypto as a method of payment for goods and services in Turkey is a 5% fall in Bitcoin, just after the asset hit a new high North of $64,000—ETH and XRP fell between 6% and 12%.

While this move from the Turkish authorities is surprising, it is however unlikely to move the needle much more than it already has. Scaring off trigger happy sellers might have offered a buy-the-dip entry point for eager crypto bulls to access what is becoming a blossoming industry. 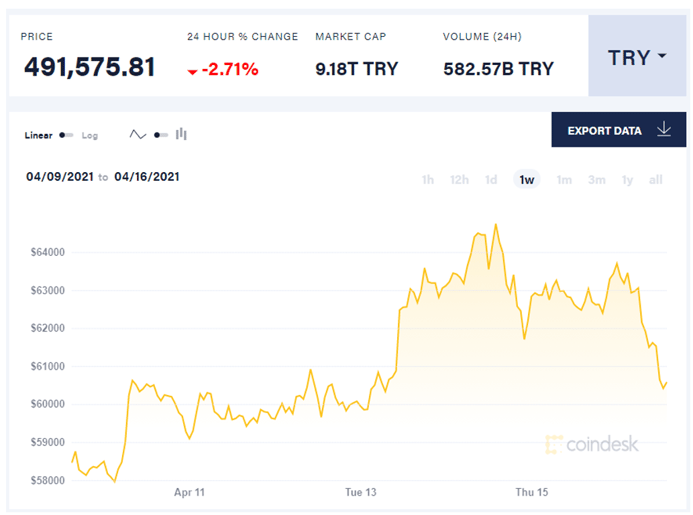 Countries like India barred Indian banks from serving crypto exchanges and related businesses back in April of 2018, but in March of 2020, the country’s supreme court dismantled the ban altogether.

It is unlikely that the Indian economy would be disadvantaged by bitcoin and other altcoins in part because their young population and extremely cheap internet ($0.24 per gigabyte vs. $12.37 in the US) presents a dual play for what could make India the largest crypto market in the future after China.

Enforcing any sort of legal barriers on crypto would be a waste of resources and could curb competition within the country in such a way that would see other neighboring nations gain if firms move operations to their foreign offices (which most crypto exchanges have).

Governments like Nigeria’s have previously been accused (falsely) of halting or threatening a ban on cryptocurrencies, but this is becoming old news in that such a prohibition will 1. not work and 2. not be in a given country’s best interest, at least not anymore.

The last thing Turkey should do is ban crypto to save the Lira. If anything, they should consider doing the opposite and embrace Bitcoin by building the necessary infrastructures for when the currency becomes more widespread, and potentially allows room to escape the ‘tyranny’ of the greenback.