Since its inception in 2009, Bitcoin’s price rise has been controversial across mainstream media and the majority of professional investors.

While many see the digital currency as being speculative by nature, highly volatile and following a random walk, certain data sets seem to indicate that the price movements can be traced to some metrics. Below, we look at the correlation between bitcoin price and the hash rate as the later just reached a new peak.

The correlation between Bitcoin price and Hash rate

Using data from Blockchain.com and superimposing price history to check for trends, it is possible to show some similarities between Bitcoin hash rates from 2009 and Bitcoin price movements (see chart below from Woodbull).

For the uninitiated, hash rates can be defined as the measuring unit of the processing power of the Bitcoin network. The Bitcoin network must make intensive mathematical operations for security purposes. When the network reached a hash rate of 100 Th/s, it meant it could make 100 trillion calculations per second.

As such, higher hash rates indicate the strength of a blockchain network as well — more mining work means better security from 51 percent attacks as more miners (and computing power) would be required to “attack” a blockchain (assuming one or few entities do not control mining).

As shown on the chart below, we can see there is a clear correlation between hash rate and price. The correlations could mean that Bitcoin is not as random as popular consensus tends to state.

Looking at history, hash rate tends to be the leading indicator of bitcoin price except during the 2012-2014 bull run as price started pumping before the hash rate accompanied it. Of course, the later could be due to a simple historical reason: it was the first time BTC had exponentially risen and fallen (2011-2012). It was therefore hard to predict if price was going to recover, meaning fewer people decided to mine the cryptocurrency given energy requirements were already starting to take their toll on mining profitability.

After price started skyrocketing and surpassed the previous all-time high around March 2013, we see a clear boost in the hash rate as more people were confident BTC was here to stay.

After the bust in 2014, even with Mt Gox going under, the Bitcoin hash rate kept increasing. Price took about two and a half years to reach its new all-time high, surpassing the hash rate once again (albeit briefly). Although there was a minor decline in late 2018 as the price of Bitcoin tumbled to $4,000, the hash rate has since recovered and has been growing non-stop.

As discussed above, there have been plenty occasions hash rate has followed price-action. Nevertheless, it seems that miners do tend to signal intentions before price moves. For instance, after the dip in late December 2018 miners started pumping the hash rate before the big price move that started around February 2019.

In addition, there’s a clear relation between hash rate and security, one that attracts long-term investors. Indeed, a higher hash rate equals more security. One reason why investors may look into Bitcoin is because not only are the prices of fiat currencies and government bonds inflated due to the enormous surplus of currency produced by central banks and injected into the markets through continues quantitative easing, but also because Bitcoin is becoming increasingly secure by the day.

The correlation, however, isn’t free from criticism.

Some analysts point out that hash rates and prices are a “game of chicken-and-egg”; price increases create a lot of retail and speculative interest in the cryptocurrency market, with investors looking to make a quick return with no intent of using digital assets in the “real” world.

Over the recent years, the hash rate chart has been showing signs of flatlining. Moreover, as defined by a complex mathematical formula, mining “rewards” decreased to just 6.25 BTC on May 12, 2020.

Consequently, the Bitcoin bears point out that due to increased mining costs and lower rewards, a flatline could mean hash rates reaching a “peak” and stabilizing in the near future, while the price of bitcoin ultimately decouples from hash rate data as a whole.

However, we have seen a re-acceleration of hash rate recently – see chart below. Data from Blockchain.com confirms that on Aug. 15, Bitcoin’s seven-day average hash rate reached a new peak of 129.075 TH/s. The achievement comes after two weeks of fairly stagnant hash rate growth, with the previous record set on July 28. 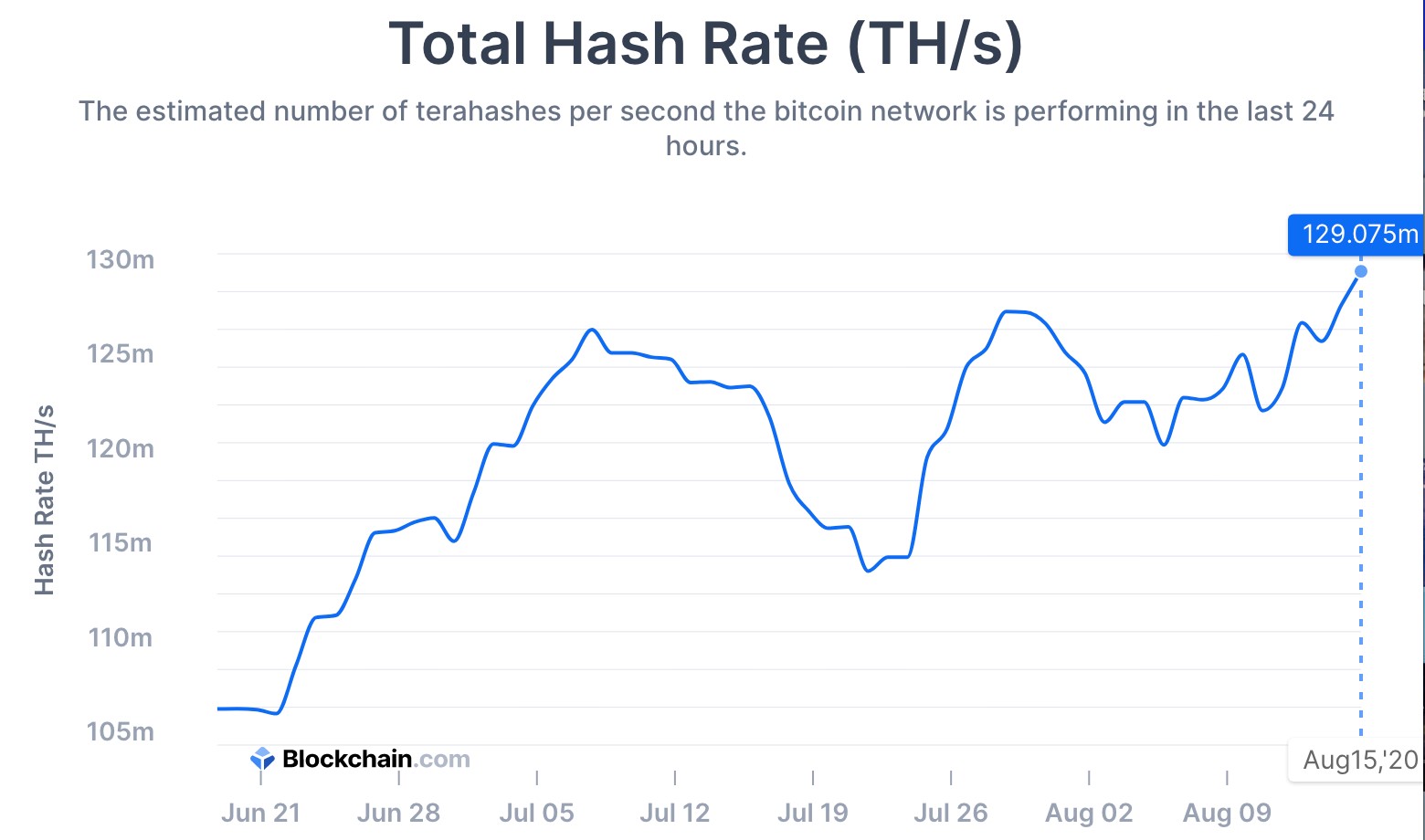 The mounting hash rate in the face of a falling Bitcoin price underscores their dedication to investing in the industry — and its future profitability. Mining giant Bitmain, for example, this week launched what it calls the “world’s largest” mining farm in Rockdale, Texas.
And if history is any guide, Bitcoin price could very well catch-up with the growing hash rate at some point. This might explain the recent strength of Bitcoin, moving from $9k to above $12k in less than a month.