Pandemonium is breaking out across the UK with around two thirds of petrol stations completely dry of fuel and the government putting the army on standby. What does this mean for Brent crude oil?

Energy prices are exploding higher across the board. Is this an uptrend to buy into or an unsustainable rally that traders should think about fading?

The picture in oil markets is one of demand running ahead of supply, falling inventories amid a global energy crunch. The situation in the UK got extreme enough to force Boris Johnson’s government to officially put the military on standby to help deliver supplies. 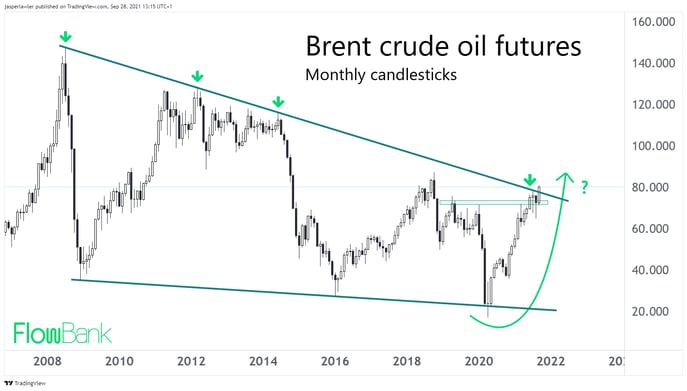 A monthly candlestick chart of Brent crude oil futures shows a potentially significant shift in trend might be taking place. This month (September 2021) looks on course to see a monthly close above a trendline that started in 2008. The potential breakout comes after the price successfully held a shallower downtrend line through the lows of 2009 and 2016.

Panic buying by motorists across the United Kingdom triggered by leaked report about possible fuel shortages has led to many filling stations running dry. Petrol and diesel were simply unavailable, leading to stories of ‘key workers’ like doctors and ambulance drivers have to drive to several garages to fill up before waiting in long lines, delaying their travel to and during work.

The fear is that the crisis will have knock-on effects in the supply of other goods and services, possibly leading to empty food shelves and no toys for Christmas!

The cause has been another supply chain breakdown whereby a lack of tanker drivers to deliver the fuel to meet the massive demand from the UK economy returning to normal (with almost all covid restrictions lifted). There are similar problems across Europe, which has seen a sharp jump in gas and power prices. However, the fuel crisis in the UK seems to have been exacerbated by less foreign lorry drivers since Brexit.

What does the UK fuel crisis mean for oil prices?

The situation in the UK is symptomatic of the current state of energy markets from gas to electricity to crude oil and refined products like petrol and diesel.

Demand is overwhelming supply, which economics 101 tell us means the price will move higher. Petrol stations will naturally charge more at the pump when demand from drivers is so high and in turn oil companies will be asking for higher prices from the petrol stations.

The implications for the prices near term depend on consumer behaviour, the government response and action from fuel suppliers.

The government has stepped in with the British army put on standby to relieve supply chain issues by delivering fuel if needed. The UK fuel industry, including big players like BP, Shell and Esso issued a joint statement suggesting a return to normality in the coming days.

“As many cars are now holding more fuel than usual, we expect that demand will return to its normal levels in the coming days, easing pressures on fuel station forecourts."

The bullish case for oil

Goldman Sachs, which tends to move markets with its analysis, just increased its forecast for US oil to hit $90 per barrel this year. We have identified the following as the major upside catalysts for oil:

OPEC+ cuts: The cartel is aiming to protect high oil prices, while keeping market share by only gradually increasing production.

Transport: The combination of catch-up demand for goods after the pandemic and the reorientation to online shopping will keep the demand for fuel high.

There remains a great deal of uncertainty about the economic outlook, the pandemic and the health of the US shale industry that could limit the upside for oil prices.

Jet fuel: Arguably the upside in oil is capped by the lack of demand from the airline industry, which is still running well under usual capacity because of the pandemic.

Covid variants: The price has climbed the wall of worry of the Delta variant of covid but fears remain of a vaccine-resistant variant that could force the kind of lockdowns seen in Australia more widely.

US shale: Higher prices is already tempting US shale producers back to work, with the Baker Hughes rig count rising rapidly after the 2020 price crash that wiped out a lot of the industry.

How to play higher oil prices

Trading crude oil can be done through futures markets, CFDs or sometimes with ETFs. The following 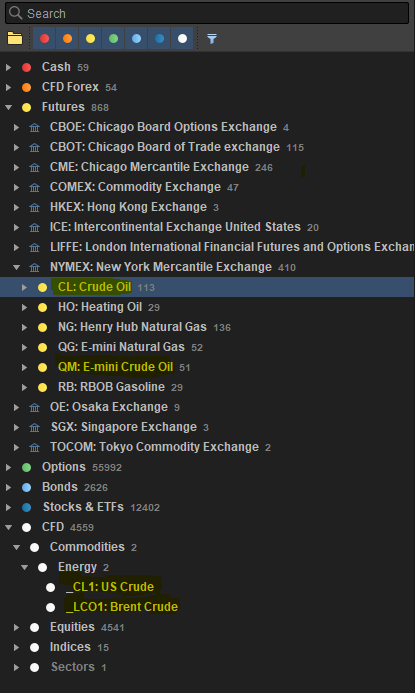 Register for a free FlowBank trading account to trade oil.