GBP/USD should breakout after a Brexit trade deal but shorts will be tempted by risk: reward

Surprise surprise its December and there is no post-Brexit trade deal! Surely an agreement will be reached in the end BUT the risk: reward to taking the other side is interesting

Must know about GBP/USD

GBP/USD fell sharply on Monday after no EU/UK trade deal was reached over the weekend. 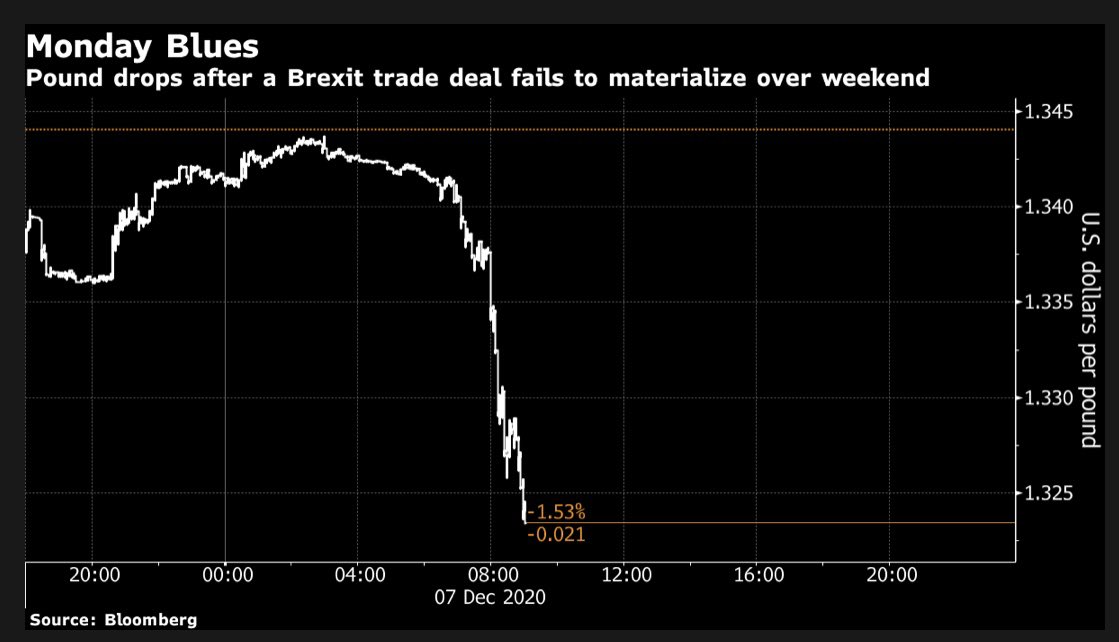 Brexit talks have ‘resumed’ again this week in what is being called a ‘final push’ to get a deal over the line before December 31. Lord David Frost is meeting his chief negotiating counterpart Michel Barnier while Prime Minister Boris Johnson is speaking with Ursula von der Leyen over the telephone. The two key sticking points are still fishing and business competition rules or so-called ‘level playing field’ provisions.

As a reminder, Brexit already happened in January, but the UK has been abiding by EU rules since as part of a transition to trading on its own terms, starting in 2021. The UK and EU are trying to reach a Free Trade Agreement (FTA) in order to trade tax free on certain goods. If there is no deal, it will mean border checks and taxes for goods traveling between the UK and EU.

The deadline is December 31, any deal needs to be turned into a legal text and translated into all EU languages, then ratified by the EU parliament and possibly all 27 member states before 31 December. The UK would enter legislation for British MPs to vote on. That means it’s a big week ahead because a deal really needs to be struck ASAP for it to happen in time.

The ‘Internal Market bill’ a UK law that aims to break some of the provisions of the Withdrawal agreement - the treaty agreed with the EU in January - will likely pass in the House of Commons Monday night. The Taxation (Post-transition Period) Bill also returns to the House this week.

The EU Leaders summit happens on Thursday (December 10th) and this is seen by many as the time at which a deal really needs to be in place.

The best investments tend to involve talking a relatively small risk for an outsized return. In the case of the cable rate (GBPUSD) the risks are quite well defined because of the trading range that the currency pair has been trading in for the best part of 2-years.

The exchange rate is trading near the top of this range because the expected result is that a trade deal will be made. However, the breakout is not happening until the deal is inked. A price move up even as high as 1.36 will likely signal that a deal is done or so close that it is as good as done. The risk to this scenario is that prices are immediately marked up well beyond 1.36 as soon as a deal is agreed- but since a deal is the expected outcome, this seems less likely than the price being quickly marked down on no deal.

It’s probably fair to assume that volatility would be greatest to the downside were no deal to occur. It’s reasonable to think that GBP could move back to the bottom of its trading range near 1.20 were no deal to happen. Even if a deal looks unlikely but gets done at the very last minute, there could be some considerable downside risk in Sterling before it happens.

Whichever way it goes, there is likely be higher volatility. We can see that from the hedging bets being placed in options markets.

The rule of Brexit to date has been to expect the unexpected. In short, nobody knows but we can quickly summarise the reasons a deal might get done and reasons it might not: