Bumble Brew: “a safe space for healthy and equitable relationships and connections”

The famous dating app Bumble asking women to make the first move is opening its first restaurant, and unlike online, no algorithm will be involved in the process. What is the strategy they have in mind?

What is Bumble again and what happened after its IPO?

For those of you who live in a cave or are simply not in the dating game anymore, here is a little reminder about what is Bumble. Bumble is a dating app with the particularity that it is women that must make the first move.

Far from only offering dating opportunities, Bumble also has a LinkedIn-like feature to network with potential business partners, mentors, or co-founders, as well as another feature to find friends with common interests.

The company IPO’d on February 11th, but the stock is not doing so well and is down 27% since its February high. 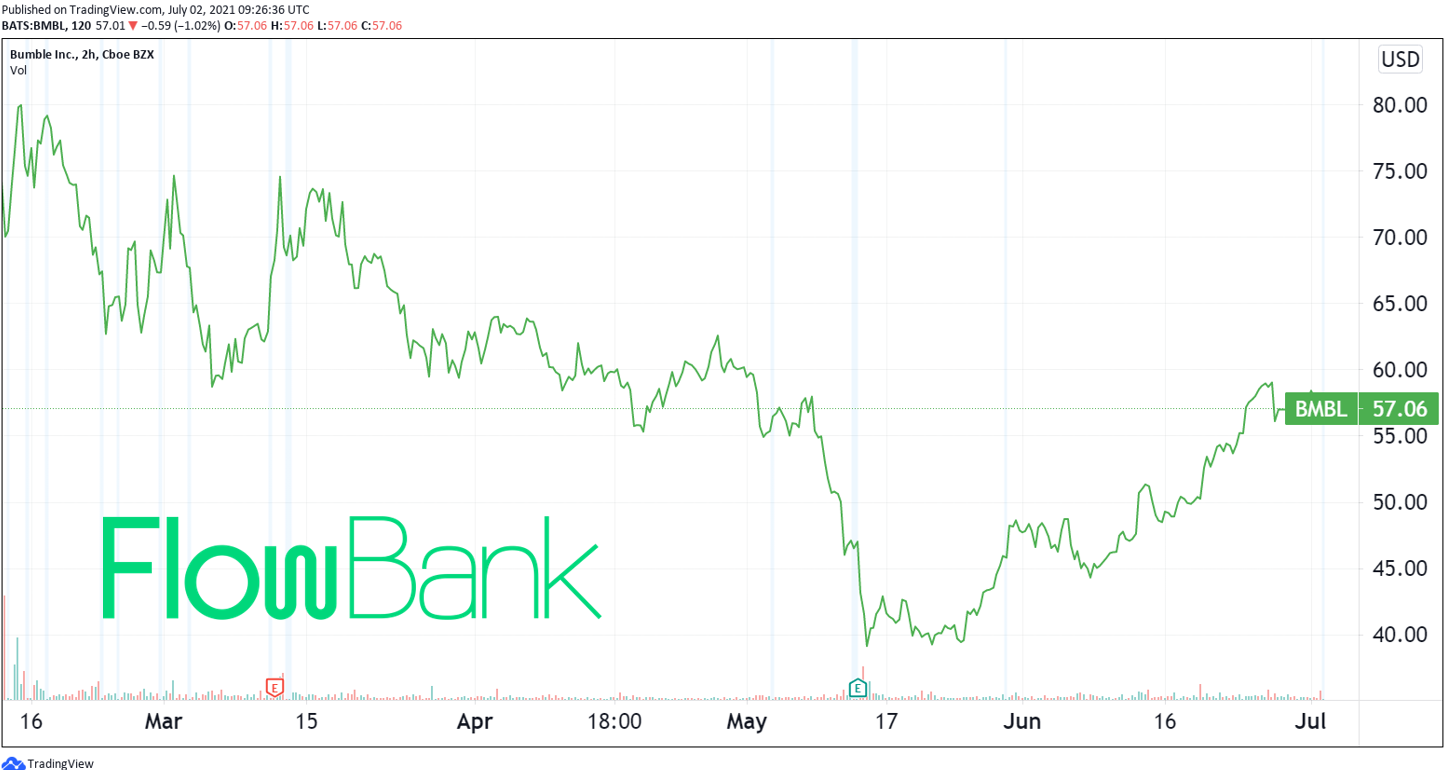 What is new with Bumble?

Four months after its IPO, it seems that Bumble is trying out something new: an IRO or Initial Restaurant Offering. The dating app that lets women make the first move is officially opening an inaugural physical café which will be called Bumble Brew, in Soho, New York, on July 24th, partnering up with the company behind Pasquale Jones, Delicious Hospitality Group. The venue was planned to open in fall 2019 but Covid-19 restrictions delayed the plan.

They bumblified the food menu, figuring that there would be many Bumble couples on their first date in the restaurant. Indeed, serving baby back ribs full of sauce and almost impossible to eat without a major catastrophe would not be the perfect dish to shine and impress. In the same manner, there will be no volcanic flaming hot burrito situation. No need to bring a second t shirt with you to keep the date going. The menu will offer easy-to-share finger food to make sure that things stay cool and classy. 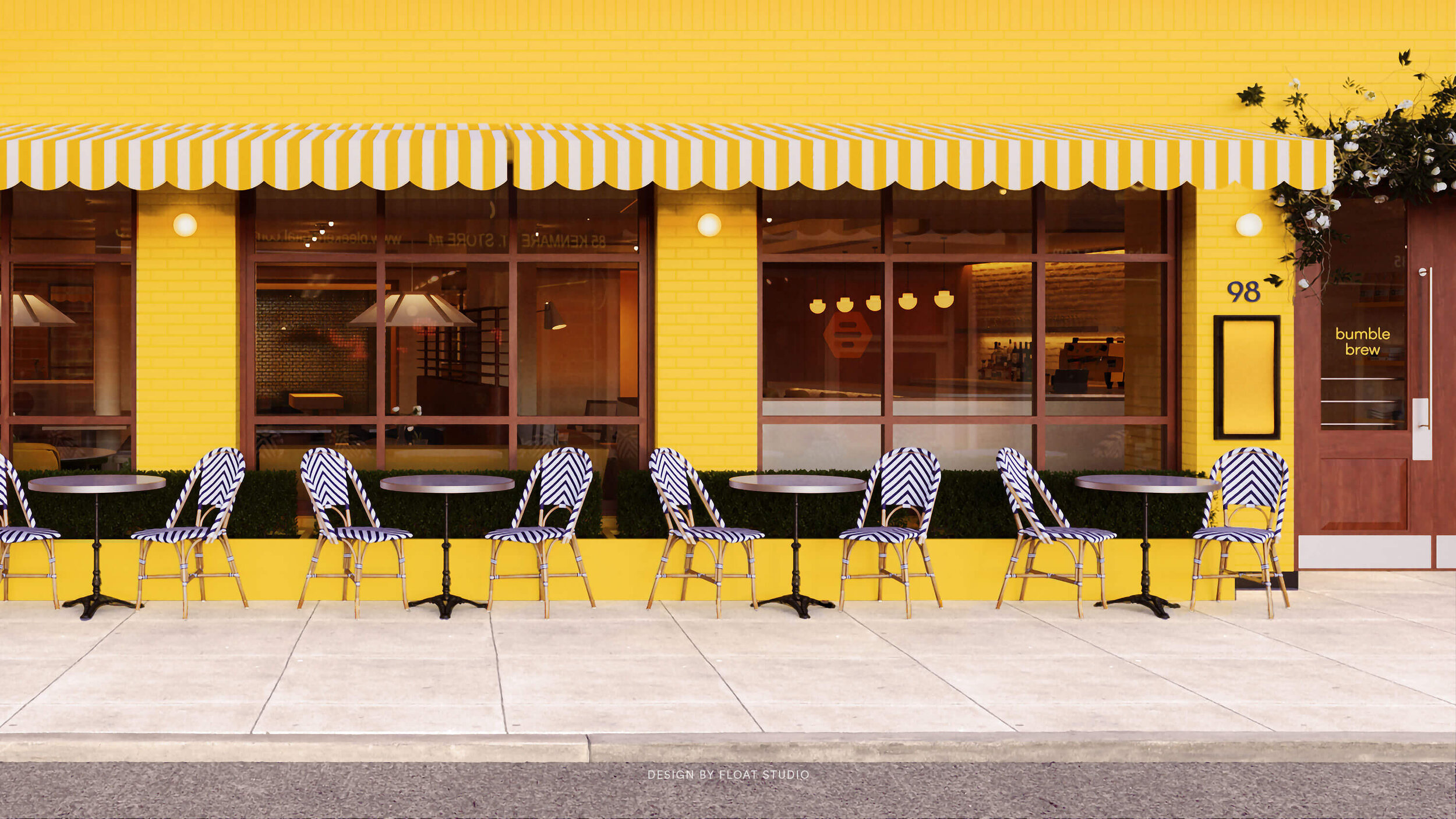 However, tt would be wrong to assume that this would only be a place to find love. This is not just a date spot but a connection space. As mentioned above, Bumble also offers networking and finding friends features, which they plan on building up in their physical store as well. Pizza with friends and networking over a great glass of wine will also be in the options. And yes, there will even be messy spaghetti options for the fearless.

Finally, it could also be a place for bumble fund, a venture fund that focuses on women-led entrepreneurship. They said the back of the place could host pitch competitions and other events such as the ones that took place at Bumble Hive, the pop-up precursor of Bumble Buzz which offered foods and drinks. 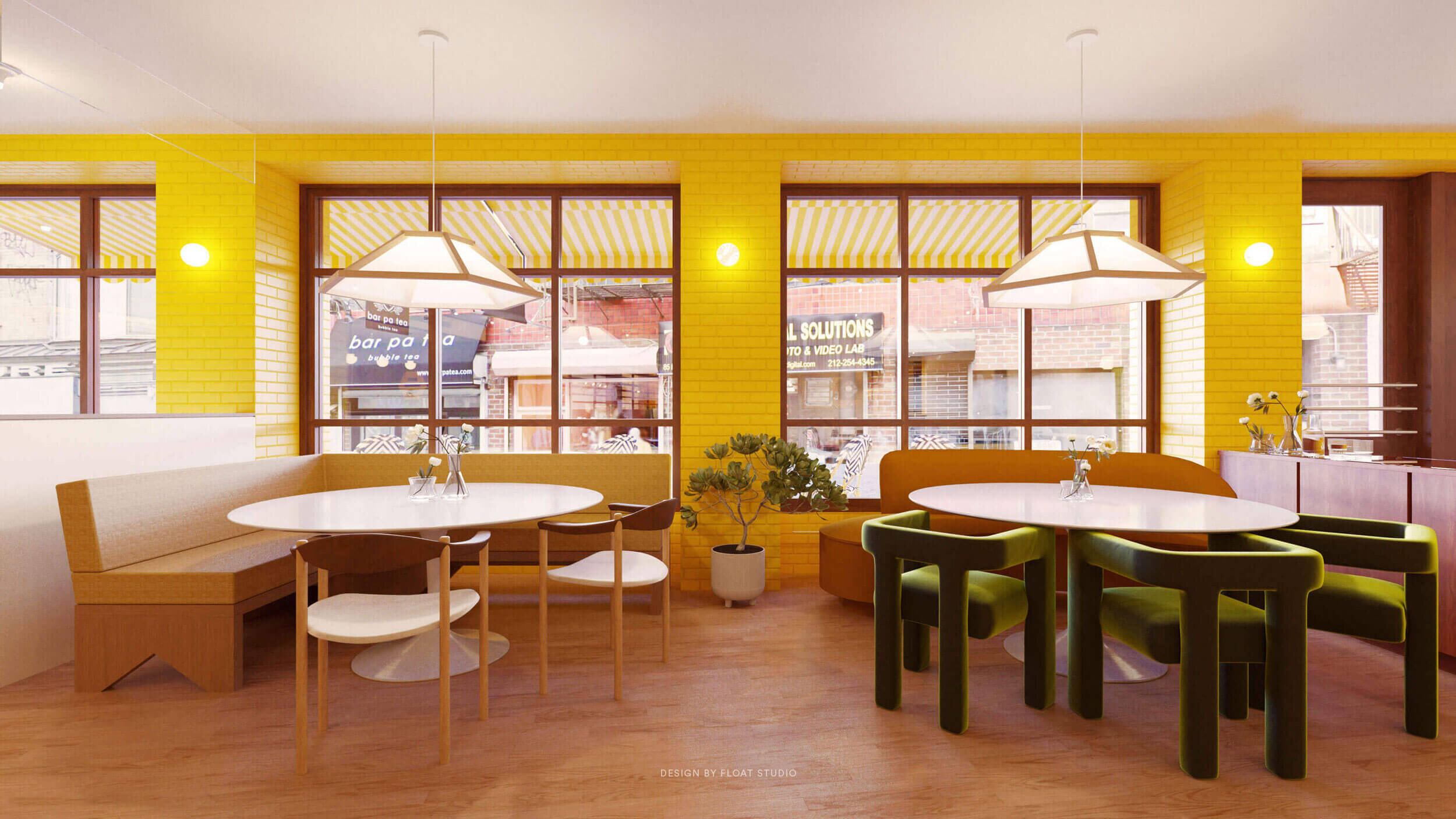 The 80-seat café is, like the app, dominated by yellow (Source: Bumble)

What is Bumble’s strategy behind this move?

According to a survey on their app, 90% of Bumble users say that they are more than ready to date in real life again. Bumble Brew will be a great way to network and make friends, but the pent-up demand for dating is undeniably their biggest growth opportunity. This will be the perfect place to date this cute guy Mike you have been talking to for the past few weeks.

They needed to push things further, as companies like Match Group's Tinder, Hinge and over 20 other competitors in the e-romance business are putting up a fierce competition.

There is one crucial point to remember about dating apps. Their success kills them. When the app has worked, you simply delete it.

That is the issue that Bumble is now trying to solve, going more towards a social media strategy, beyond the finding-you-love function, just to stay in your life a little while longer. By creating a physical offering as a place where you can not only date, but connect with like-minded people, network, make friends, participate in events, they hope to build a lifelong brand and community.

What is more, how great is it – following a dark period where social contact was almost non-existent – to open a place where connection is the main objective? Sure, you have cafés, restaurants, many places, but one could imagine a very specific energy in a place where every single person that entered the venue is open to meet new people and live new experiences. 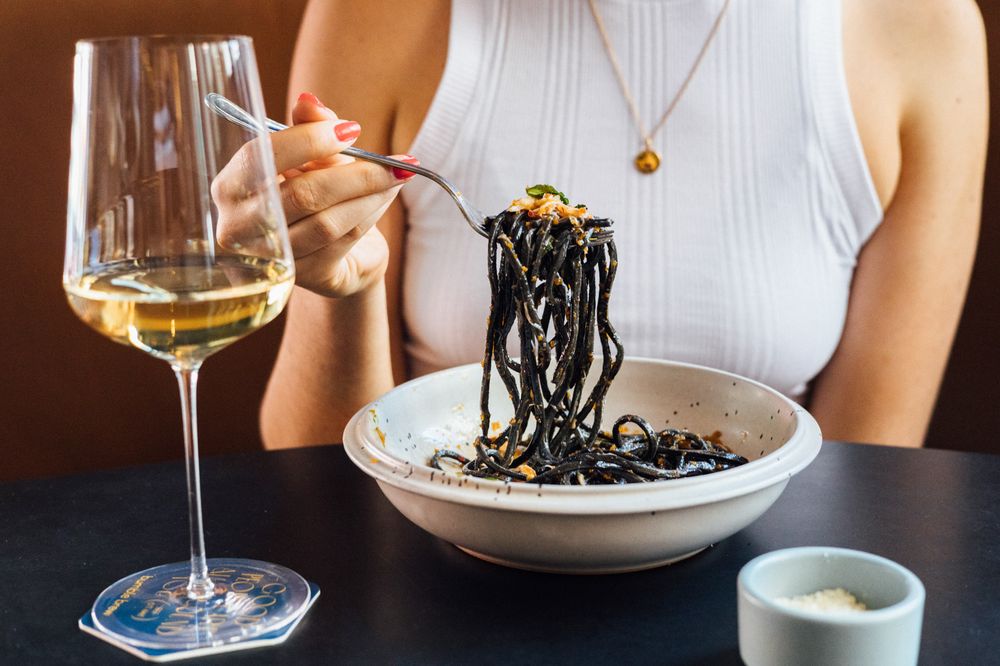 A wide range of meals will be available, breakfast and dinner alike (Source: Second to None NYC)

When you add it all up, entering Bumble Brew you will be able: meet a cofounder, follow women-led tech events, find love, all over a 9-dollar honey latte. Sounds good does it not?

The app gave Bumble scale, but the community is giving it relevance. The immense user base convinced investors to launch the IPO. The next step will be to transform the business and build it into something even great to keep the company growing and the stock price along with it.

There are no concrete plans about another opening, but the company say that if the New York experience goes well, they have their eyes on Austin, Texas, with big plans as well. New York will be their playground to test this new idea. Sure thing, opening a restaurant in an era threatened with pandemic is a bold move, but they can bet on the fact that the next ones will be dealt with more efficiently. And anyways, we ought to keep on living, do we not? 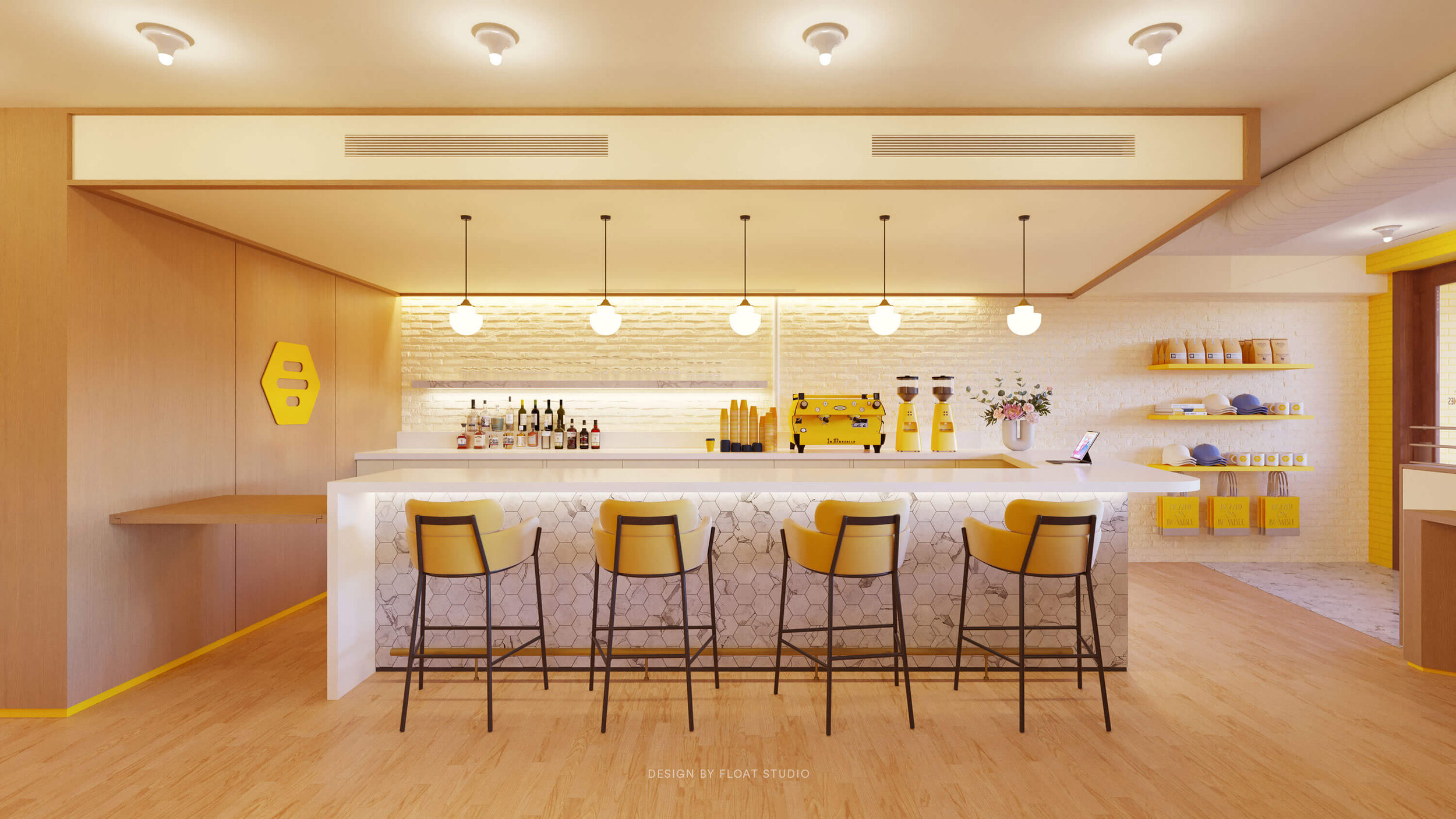 The bar will offer a wide range of beers, wine and fine cocktails (Source: Bloomberg)