The concept of ‘margin of safety’ is a key cornerstone of investing literature pioneered by the ‘father’ of value investing, Benjamin Graham. The idea is simple: a stock should be priced in the market for much less than what it could be worth down the road. Warren Buffett, the famous investor who built his success partly on this strategy, mentions that a stock should be trading around a 50% discount to what it is actually worth, to fit the ‘margin of safety’ category. There are many caveats, most often stocks are cheap for a good reason, such as high risks to earnings or severely endangered assets. We look at several criteria to identify ‘cheap’ stocks.

Buybacks for the third-quarter of 2021 totalled USD234.6 billion, up 130.5% year-on-year. It is a staggering reminder that large US companies have solid balance sheets and buybacks take center stage in their strategy to boost shareholders returns. Interestingly, about 53.8% of buyback dollars are fuelled by the top 20 companies: mostly mega-tech and large banks. Unsurprisingly, these have strong balance sheets, and record cash flow. Tech giants favour buybacks over acquisitions because of the threat of anti-trust lawsuits. 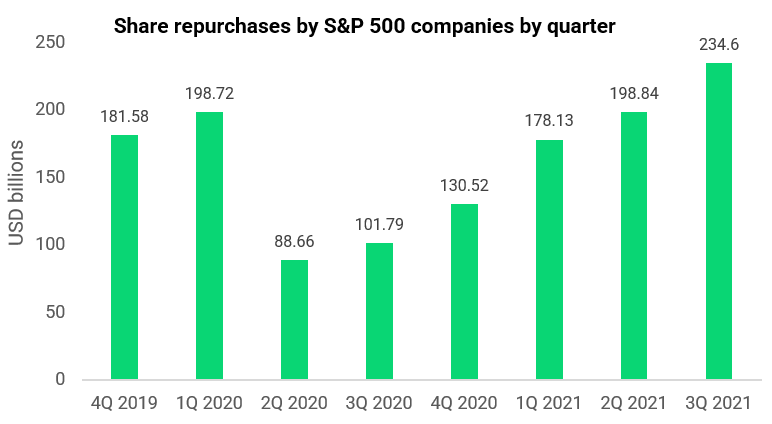 The bottom line is buybacks act as a support for the share price as the company buys its own stock in the market, and in the long term it reduces the number of shares, boosting earnings-per-share, even if the earnings don’t grow. It is a good deal for shareholders, if the stock is attractively priced and there aren’t better alternatives for the company to deploy capital – otherwise it destroys value.

In our quest to find stocks with some downside protection, companies doing buybacks usually are trading at low multiples already. A company trading at high multiples would usually be much better off using its stock to make acquisitions, rather than buying back its shares. Investors should be aware though that during the blackout period, in other words the three to four weeks prior earnings, companies usually pause buybacks to prevent being accused of trading on insider information. That pause can cause the stock to be more vulnerable to sharp drops than when buybacks are happening.

In 2016, Apple was trading at very low price to earnings multiple for a sound reason: analysts thought it would face more competition with smartphones and that it wouldn’t be able to diversify quickly enough from iPhone sales. Warren Buffet’s Berkshire Hathaway jumped on the opportunity to invest in the iconic brand. It assessed that, even if sales peaked, thanks to a low P/E and a strong balance sheet, Apple could still deliver good returns. And it did, the company increased six-fold since.

Starting from a ‘cheap’ valuation is key as it makes it easier for the company to over-deliver on expectations and reduces the risk for investors. In other words, starting from rock-bottom provides more opportunities to surprise on the upside. Similarly, Apple’s buybacks have been effective because the stock was trading at reasonable valuations most of the time. Earnings filters come with some caveats, however. They need to be sustainable over the years and be turned into cash flows, and not only paper profits.

A solid balance sheet comes as one of the most important criteria to alleviate some of the risk. Companies keeping large net positive balance of cash and short-term investments can take advantage of opportunities through stock buybacks or acquisitions. They can also return capital to investors in the form of special dividends. The quality of the assets on the balance sheet is often not crystal clear, particularly for mining, oil & gas sectors, and pharmaceuticals which can be subject to rapidly-changing conditions, often best to be avoided. From time to time, solid brands, or companies can be undervalued by factors affecting the broader market (European debt crisis, political crisis, pandemic etc). Throughout history, companies with solid balance sheets have tended to carry the least risk of bankruptcy in time of crisis and are able to take advantage of business opportunities.

Highly profitable stocks are those that have high net profit margins, through what are often very robust business models coupled with well-established leadership positions. They tend to be bid up by the market rather quickly in times of corrections. Combined with attractive valuations, profitable companies generally have fire power to support their share price through buybacks at times when the market is weak. They tend to benefit from high barriers to entry and solid moats that are durable. At times, it may require a lot of judgment from investors. For example, ‘big tech’ stocks were often pressured in recent years as regulators debated whether the framework should be strengthened. Similarly, stocks of Visa and Mastercard have been under pressure in the past, as regulators pondered whether the large payment network processor duopoly should be regulated.

Stocks that are popular and well owned in the market are less likely to find new buyers ‘en masse’ than disliked parts of the market. It may be mid-cap stocks (market capitalisation of between USD2-10 billion) that are under the radar, or stocks of large caps that investors don’t own. For example, following scandals, many investors stayed away from Meta (Facebook). However, the tech company continued to post incredible growth. As expected, the company does buybacks and continues to invest in its business. It is difficult to miss and the stock is widely out there, but the level of bad press is very high. In a December 2021 Yahoo survey, it was rated the worst company of the year.

From a purely financial perspective, however, it enjoys net profit margins of around 30%, a P/E ratio estimated for 2022 and 2023 close to 23.1x and 19.4x. Its balance sheet is solid, with approximately USD65 billion net cash. As a result of the bad press and the risk of being challenged by regulators, it is likely investors are looking at other companies with less strings attached. Nonetheless, Meta (FB) is trading at a steep discount to its peers. In 2021 and year-to-date, it outperformed the Nasdaq 100.

While a top-down approach to sort stocks that are trading at a low valuation is useful, a more acute analysis is required to evaluate the future of the underlying company. Stocks pulled down due to a lack of popularity or even bad press can be the source of alpha as sound fundamentals combined with low valuations can be the recipe for attractive returns. This approach is not particularly popular as investors are often instinctively driven to chase performance and to avoid stocks that attract bad publicity, but it should not be discounted so easily.