Carbon offsets and impact investing—what is the catch?

Everyone talks about carbon trading as the solution to our climate change problems. Our current solution—carbon offsets—works, but it’s imperfect, and our ESG efforts? They are faulty.

You know there is a central bank, but did you know there is a ‘’carbon’’ bank? That’s right. In order to curb pollution, policy leaders have put forward a market upon which major manufacturers are regulated to pay for their carbon footprint. William Nordhaus, 2018 Nobel prize winner in economics has suggested a general carbon tax instead—it’s the best way to efficiently alleviate pollution problems for long-term success—but taxation is just harder to sell politically hence why ‘’carbon markets’’.

A carbon market principle works as follows; there is a fixed supply of allowances. These allowances symbolize clean air contracts and clean businesses sell them as a way to finance their operations. Now, when a big business wants to offset its carbon emissions, it buys such contracts from the market and essentially finances a clean business’ operations in return. The polluter therefore participates in a cleaning act because it finances something like a tree planting business.

The most developed carbon market resides in Europe. It launched in 2005, but for many years has seen very low carbon prices, until recently. Low carbon prices from an over abundance of allowances supply had led to policy intervention changes back in 2018 where prices were suddenly tripled, as shown in Graphic 2. Between 2018 and 2019 there was an 8.7% drop in emissions as seen in Graphic 1, showing a strong reaction to the rise in carbon prices. William Nordhaus approves rising the price on carbon as a long term solution.

Graphic 1: showing the 8.7% decline in emissions by segment. 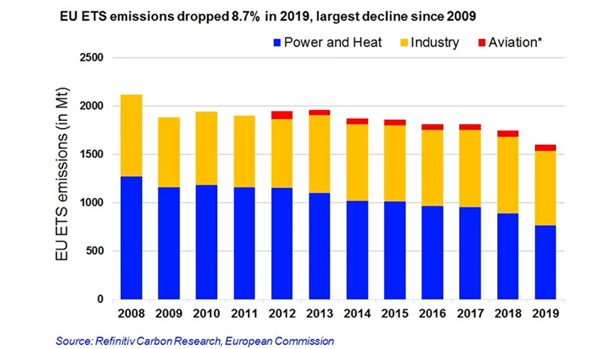 Then there was a dramatic drop in carbon emissions in 2020 because of the obvious slowdown in economic activity around the world. Recently however, prices have been skyrocketing despite lower emissions. A tightening policy could see carbon prices continue this upward run, and therefore become a very interesting long term investment strategy. Buy carbon emission allowances and hold! Europeans are using this market as the main tool for climate policy control and now, in the world’s first polluting nation, China is pushing for similar efforts. In Geneva, Trafigura and Mercuria have hired new traders (just look up ‘’carbon trading’’ in LinkedIn) to join their carbon trading desks and they’re recruiting aggressively which means that this business could actually blow up.

Carbon offsetting efforts have also been made on the crypto front with the UPCO2 token offering on Uphold.com enabling investors to buy one UPCO2 token to offset 1 tonne of emission. One can either ‘’burn’’ a token to offset ones own emissions, or sell the token to provide funds for rainforest projects. These ERC-20 (Ethereum fork) tokens are audited by CertiK and issued by Universal Protocol Alliance. 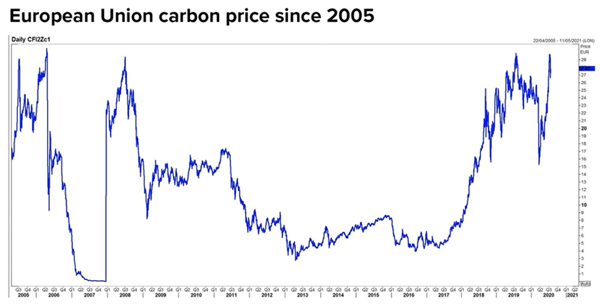 Large polluting companies have been feeling the burn as world leaders begin to pressure them into green pathways. The trade is straight forward for polluters; companies around the globe can buy offsets from groups that plant and protect trees or install renewable energy. It’s one offset (see Graphic 3 for Q2 prices) for one ton of emitted carbon. The market response to this negative externality, i.e. pollution, has however been said to be faulty—that the money collected by polluters could be better used elsewhere. 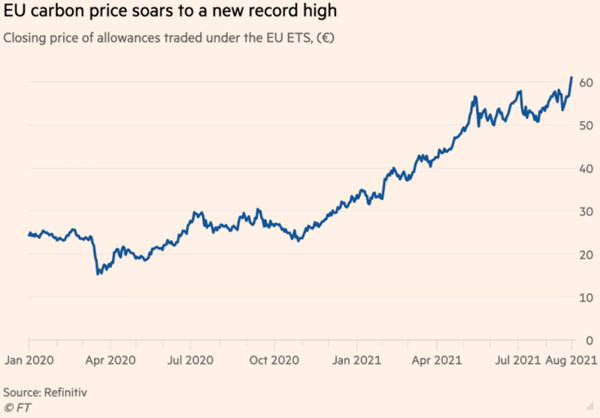 Mike Carney who used to govern the Bank of England has said that carbon markets are imperfect, that traders at banks mistrust them and don’t recognize them. Apparently, there is a lot of argument between the market organizers who disagree easily and fight on structural arrangements. One point of contention for example is how to build an Oil-like multibillion-dollar trading system quickly, While avoiding quality problems.

Despite today’s €60 prices per allowance, the cheaply available contracts from previous periods are not likely to convince companies to make serious concessions if they can just use cheaper contracts. That’s a short-term problem because it defeats the whole purpose of climate action. There needs to be some type of recognition for offsetters, but forgiveness in the form of rights to pollute ultimately slows down progress. Ideally, contracts should be sold for any excess emissions, those that firms have an extremely hard time preventing. Right now, big companies are not incentivized to use allowance for their extra emissions. So, who do you suppose benefits the most from this market structure?

Who really benefits from offsets?

Carbon markets help with awareness, and it’s a great start in our economic context, but it looks like patchwork and duck-tape glued between the world we live in (one where we need producers to make our food, cars, shelter and heat) and the ideal world (one where air is clean and animals stop going extinct).

The truth is big energy companies are not doing anything wrong, they’re playing by the rules! They get to keep polluting to make our stuff, but they also get to finance cool clean projects. However, the issue is that this could be done without the carbon market... Big energy firms are changing their behavior, yes, but they are not incentivized legally or financially to reduce additional emissions that they now can just pay for. Basically, big firms are getting away with pollution, but now have a pass to wash their hands clean.

From a future of work standpoint, this market will become massive, that environmental investors with knowledge of investment and natural sciences will be in much demand to help decipher the ‘’offsetting’’ projects that should be allowed to be financed by these allowances. Right now, there are a lot of offered projects that don’t make the cut to actually offset pollution one to one. So far, fewer than 5% of the offsets in 2020 actually removed carbon dioxide from the atmosphere. 50% of projects being selected right now are in forestry and land use initiatives according to the Berkeley Carbon Trading Project, but there is a disbalance in longevity. In other words, trees don’t store carbon forever which violates the very point of the offsetting agreement—how do we fix that?

The apostates of ESG investing

Before we part, a word to the wise on ‘’impact investing’’. We illustrated above that carbon markets are filled with thorns and blatant inconsistencies, but what about ESG investing as another solution to our problem? Don’t get too excited. In a recent blog by Mr. Fariq Fancy, ex Head of ESG investing at BlackRock, he notes that impact investing contains major loopholes and conflicts of interest.

While flying on a private jet between New York and Zurich, Mr. Fancy recalls his colleagues discussing ‘’clean’’ ESG products being a fantastic business to be in. Just look at the next graphs and the massive opportunities to profit becoming increasingly more clear—BlackRock invented this opportunity and collects fat fees in the process. Mr. Fancy goes on to explain that BlackRock pushes for ESG rhetoric, sits back until clients need them to broker a deal, pay large fees to BlackRock and check off their ESG boxes for board meetings. 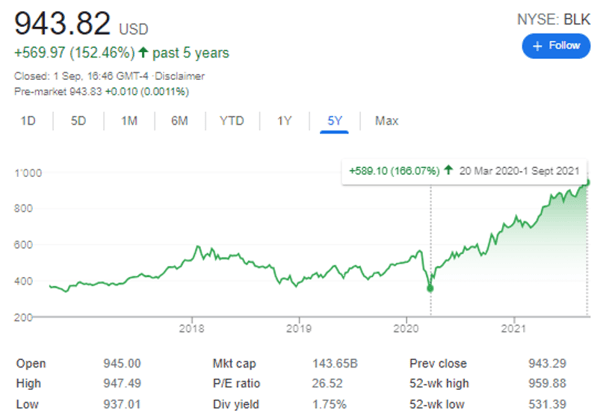 The fact is simple; ESG global funds have gone exponential. Everyone on the street is latching on, especially between 2020 and 2021, and BlackRock played a big part in this, and they have profited from ESG. 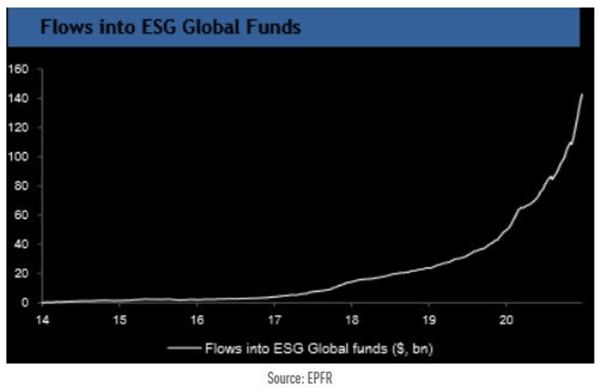 Beware of ESG company fundamentals though they’re clearly massive premiums being priced in; EDPR trades at 50 times earnings, Orsted at 55 and Verbund 47. Have ESG firms suddenly become better for the environment, or are market participants just now pricing in the above parabolic outburst? 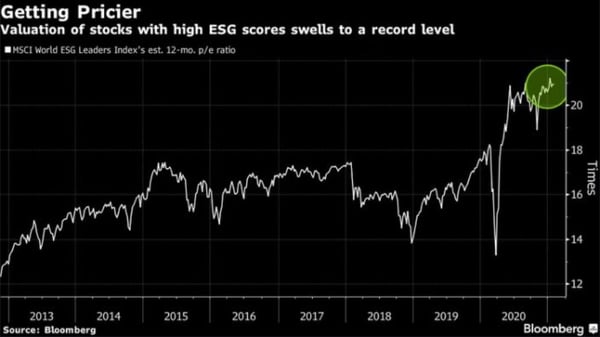 In the wise words or Mr. Fancy, ‘’ Unfortunately, protecting an investment portfolio from the disastrous effects of climate change is not the same thing as preventing those disastrous effects from occurring in the first place … people who live near forest fires in California [don't] feel safer because one of their neighbors purchases wildfire insurance on their home.’’.