Switzerland has now recorded 6 months of consumer price contraction. Now, does the Swiss National Bank need to do more?

Switzerland’s Consumer Price Index (CPI) dropped 0.9% y/y in July- that was higher than the -1.1% forecast and the -1.3% prior but marks a sixth consecutive month of annual deflation.

The Swiss National Bank has not lowered interest rates this year and has instead been intervening directly into foreign exchange markets to hold down the Swiss franc. The unique problem for the SNB is that traders are not moving into the franc for yield but for safety.

Inflation this low for this long means the SNB is missing its inflation target. Ordinarily a central bank would cut interest rates- but in Switzerland, the benchmark interest rate already sits at -0.75%. 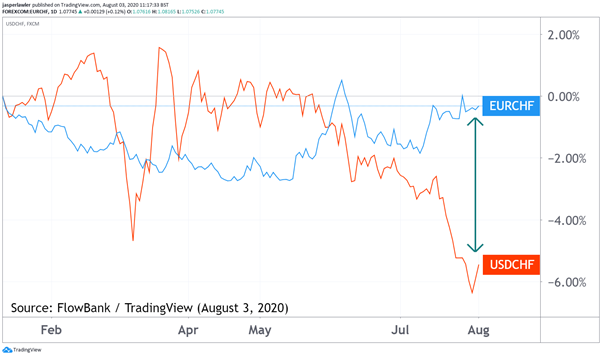 There will be alarm bells ringing that the Swiss franc has touched its highest against the US dollar since the euro-peg was removed, but equally there will be relief that the franc is flat on the year versus the euro.

Because yield is not the primary motivation for traders demanding francs, and because monetary policy is at its lower bound; we suspect the only course of action is for the Swiss National Bank to intervene more heavily directly into FX markets.

For the moment, SNB franc-selling, a downtrend in the US dollar and optimism about the Euro-area Recovery Fund boosting the euro are the biggest drivers for the Swiss currency pairs. With stock markets having recouped much of the losses since the start of the pandemic, haven-flows are not such a factor.

If/when there is another sell-off in stock markets and haven flows play a bigger role; the question then is whether the Swiss National Bank has enough firepower to stop another big rally in the franc. If it doesn't the differential between EUR/CHF and USD/CHF should come in via a lower EUR/CHF and/or higher USD/CHF.

Read our next article: TikTok and Microsoft