Speculative frenzy in Chinese tech stocks is long over! That is, for most investors, but not Warren Buffet’s right-hand man, Charlie Munger, who recently invested in Alibaba. Could historically low valuations be a rare buying opportunity or is it the justified result of a regime change with even tougher regulation ahead?

Chinese tech companies are on the road to becoming the backbone of the economy, as the country shifts away from its reliance on old, asset-heavy industries such as steel & coal production, and real-estate. Tech giants have grown at lightning-speed in the last few years, fuelled by high-growth industries such as e-commerce, EVs, fintech and gaming. However, stricter regulations have threatened stocks of Chinese tech giants of a cold winter.

What happened to Chinese tech?

Chinese tech has faced some challenges, to say the least. To a certain extent, some regulation was due as it needed to catch up with the US and Europe regulation of their big tech companies. However, in the Far East, the environment is even more complex.

Indeed, Chinese companies dominate everyday life, and over the years, tech giants have gained a lot of control over society, which is problematic for Beijing. One of the Communist Party’s objectives is to have thousands of businesses thrive and not be reliant on a handful of tech giants that could make their own rules. In other words, the government is prepared to significantly support its small and medium size businesses as opposed to lending a helping hand to giants, which can easily take advantage of smaller players.

The government is willing to re-design industries. For example, in 2015, it cracked down on private schools, made M&A illegal in the sector, and added a few other restrictions to slow the trend of parents sinking their whole budget into private tuition. Still, the message was not clear enough, so policymakers decided in 2021 that these rules would extend to after-school tuition as well. Over the course of a couple months, stocks such as TAL Education and New Oriental Education, listed in the US, lost approximately 90% of their value; at their peak, their market cap was USD30-50 billion.

The reality in China for many businesses is a risk to fall in the government’s crosshairs. As a result, investors have rushed to invest in domestically listed shares (A shares), which may be less vulnerable, and some investors have avoided mega-cap tech entirely (hence the discount). Investors have also poured into the ‘new’ tech champions of industries that fit with the government’s objectives. CATL, the battery maker that supplies Tesla, listed in Shanghai, is one of those companies.

So far, there has been more fear than damage done to the earnings outlook – but overall, not to stock prices. While some believe the worst is behind us, there is still a high level of uncertainty, as the dust has not yet settled and regulators are still designing the rules around data, fintech, foreign listing and IPOs, Chinese brokers abroad, online delivery etc. There are also risks around areas that have been regulated before, such as gaming (Tencent and NetEase stocks suffered at the time). As a result, the historic discount on multiples could persist. Nonetheless, it should not stop well-established businesses from growing their presence and their earnings, even if valuations remain depressed.

For those interested in exposure to China, there may be an opportunity to grab shares in tech giants at heavy discounts. For example, the CSI Overseas China Internet Index tracks Chinese companies focused on the internet, including those listed in the US and Hong Kong, which is replicated by the US-listed KraneShares CSI China Internet ETF (KWEB). 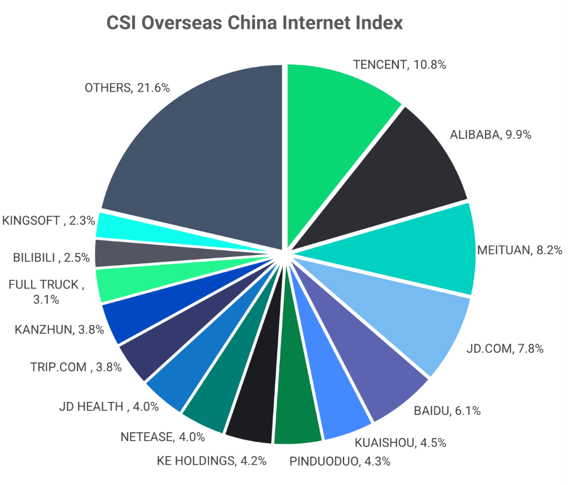 With Tencent and Alibaba representing nearly 20% of the index, it is worth investigating their fundamentals. Their balance sheets are robust with large cash positions, and both companies count multiple private investments. Tencent, for example, is often referred to as a Private Equity giant, as it is famous for making many private investments and even taking stakes in public companies. At one point, it owned 5% of Tesla and invested in Snapchat. More importantly, it has a significant stake in JD.com, which it is in the process of selling, most likely to satisfy regulators that it does compete fairly and doesn’t use its WeChat ecosystem to prioritise its investees. Similarly, Alibaba has ownership in large companies such as its 32.5% stake in Ant Group, which operates the largest digital payment platform Alipay, serving over one billion users and 80 million merchants.

On the earnings front, both companies are trading at historically low multiples.

While the future will remain uncertain for some time, it is interesting to point out that the Chinese internet stocks have flushed a lot of the speculation and risk out of the market already. As such, the risk/reward could be attractive at these levels. 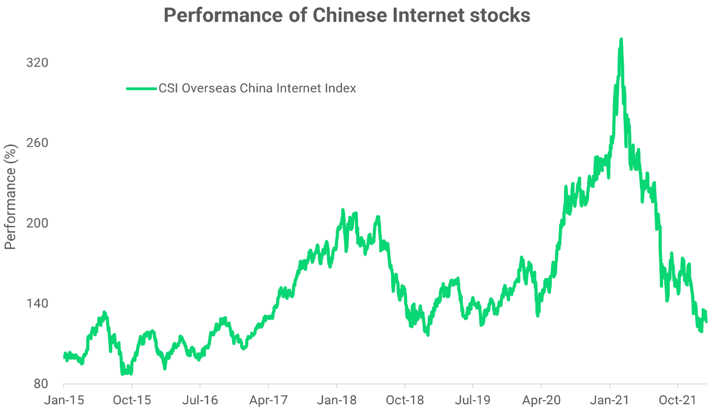 Despite ongoing risks, we believe that Chinese tech stocks offer an interesting investment case that should benefit from China’s growth and particularly from the increased role of the digital economy, especially over the longer term. While any new announcements of harsher regulation could entail significant downside risks, the sector’s valuations are historically very appealing, and long-term growth prospects remain robust.