Are the problems at Chinese property group Evergrande a risk to wider market sentiment? In other words, will there be contagion?

The world’s best-known investment bank Goldman Sachs is sounding the alarms about Evergrande - the Chinese property group in the throws of possible insolvency. Their latest warning comes after previously downplaying the risks.

Talking of investment banks - Is this China’s Lehman Brothers moment ?

China Evergrande Group has $300 billion in liabilities and has been missing payments.

China's major banks have been notified by the housing authority that Evergrande Group (3333.HK) won't be able to pay loan interest due Sept. 20, Bloomberg reported on September 15.

The stock price has fallen off a cliff and the company’s bonds are pricing in default - i.e. loans will never get paid back. That puts whoever made the loans in trouble, and that includes a large list of banks and institutions. 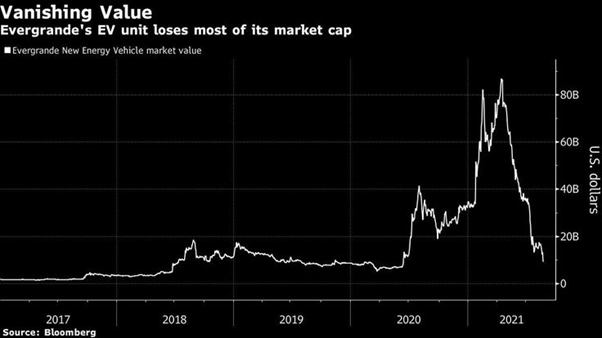 Evergrande was founded in 1996 by billionaire Hui Ka Yan as a real estate developer and has expanded into an empire that includes industries favoured by Beijing like EVs, bottled water and a football club.

The revenues across these businesses slowed during the pandemic to the extent that they can no longer cover debt payments.

The first public sign of weakness was in August 2020 when the company sent a letter to the regional government of Guangdong warning that debt payments due in January 2021 would cause a liquidity crisis that could lead to defaults across the financial sector (i.e. contagion!)

How do the Evergrande problems get fixed?

The company has been in a race against time to sell down assets and raise money to lower its debt-load. But as always the worst time to sell something is when you have to. Any private buyers of non-core businesses like its water business will likely hold on to squeeze out the best price.

The company has not issued a US bond since January 2020 in an effort to reign in borrowing under pressure from Beijing. This might need to be done if asset sales aren't enough but it would happen at cut-throat prices and might just delay the inevitable.

This is the elephant in the room. China is a command economy and as such need to project an image of government control. A massive corporate collapse with collateral damage effecting normal home-owners doesn’t do that.

In our view, a bailout of some form - likely through state-owned enterprises (SOE’s) is the likely end-outcome. The short term problem is that even the Chinese Communist Party won't be able to make everybody whole - there will be investors losing money. The long term problem is that it further dilutes ‘moral hazard’ i.e. future risk takers will know the state can bail them out if it all goes wrong.

How does market contagion happen?

Contagion will often start when investments go sour in just one company. Those investments can go bad in one of two ways. 1) Car crash 2) Slow burn

Evergrande sits in the second category. If it does collapse, it won’t be a surprise but could still catch a few companies off guard. Even if direct counterparties to Evergrande have risk management plans in place, the actions they take could badly affect their other counterparties, who would be less well prepared.

How could markets be affected by Evergrande?

Whether the failure of a single company causes problems to just the investors in that company - or to investors more broadly also depends on the general investing environment.

There is already an abundance of international caution on display from investors towards Chinese markets after a series of harsh and unexpected new government regulations hindered and essentially ended some high-growth industries. 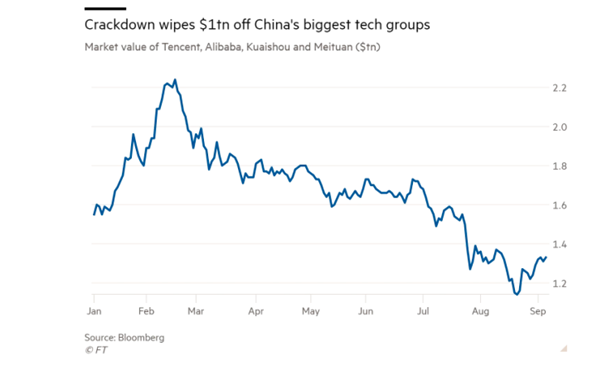 A collapse in Evergrande could add fuel to the fire, or conversely given that it has been so well sign-posted mark a sentiment low and market bottom.

The S&P 500 index is testing its 50-day moving average, which has supported the uptrend in the US stock market benchmark all year. The index has been within 5% of an all-time high for over 300 days.

It is almost the exact opposite of China - things are looking very strong on Wall Street despite concerns over the Fed winding down its pandemic-era stimulus. Most pundits will tell you any Evergrande aftershock would be short-lived in US and internationbal stock markets because - well - buy the dip.

It could also be argued that conditions are ripe for a sentiment shock.