Chinese crackdown: is it over? Is it time to buy the dip?

Chinese stocks fell this year, following a massive regulatory crackdown across most sectors. Is the storm over or are we in for a long period of low returns?

Tech, education, health: no one is spared

Seeing private markets grow ever bigger and stronger, the Chinese government is rolling out a plan to gain increasing control over the country’s data and internet, and more particularly on how Chinese companies store and manage data from the nation’s 1.4 billion population. Beijing does not only fear this, but it also wants to control and use it. Under the argument of protection, what policymakers want is control, according to Aswath Damodaran, professor of finance at NYU.

Any company infringing on new laws will face the threat of enormous fines, up to 5% of the company's annual turnover. E-commerce giant Alibaba has already accepted a fine of $2.8 billion after an investigation found that it had abused its dominant market position for years.

But the crackdown is not limited to tech. Fearing education inequalities in the country, China also overhauled its $120 billion private tutoring sector by declaring that all institutions offering tuition on school curricula must be registered as non-profit organizations – no public financing will be allowed, no investment from foreign or listed companies will be accepted. Additionally, they have heavily restricted the use of video games among children, wanting to limit what they called “spiritual opium”. Both these measures aim to protect the youth and create safer cyber and educational environments.

Bitcoin and cryptocurrency mining and trading were also banned, accused of disrupting the controlled economy’s financial system and contributing to crimes such as money laundering. Any cryptocurrency-related activity is now strictly forbidden.

Other industries are being heavily cracked down and regulated, such as health, with a tough crackdown on cosmetic surgery or the entertainment industry with new rules on permissible content.

An important weight on Chinese companies

Naturally, shares in many Chinese companies took a severe hit, with the tech sector hogging the spotlight. In addition to paying the above-mentioned fine and suspending the IPO of Ant Group, Alibaba US-listed shares shed more than $400 billion in value in the last year. Tencent Holdings has lost more than $347 billion since its all-time high in February and was forced to end music licensing deals with record labels around the world. Needless to say, the video games ban did not help the company either. Didi, the largest Chinese ride-hailing company, shed $37 billion in value, or about 40% since its June IPO. Food delivery company Meituan experienced bad press when its founder was accused of criticizing President Xi, becoming the target of an antitrust probe. The market value dropped more than $154 billion.

Additionally, many US companies had to take their operations out of the country, mostly due to an increasingly challenging business and legal environment. Yahoo was one of the last companies to pull out last week, following Zoom Communications, Microsoft’s LinkedIn, Facebook, and Google. As if tech regulations were not enough, many other companies are also looking to relocate at least part of their production, as they look to diversify their supply chain dependency amid ongoing disruptions that are impairing their business. These include Adidas, Nike, Puma, Apple, Hasbro, Kia, Hyundai, Dell, HP, Intel, Sony, Nintendo, Under Armour, Superdry, to name a few.

Is the storm over?

If we follow the Chinese Government's official plan, the legislation appears to be far from over. In fact, a ten-point plan was published this summer, that runs to the end of 2025. The plan expects many new rules, including measures on national security, education, culture, science, technology, and monopolies.

However, one element that we ought to mention is growth. How much self-inflicted pain can the Chinese economy endure? Just as the country is recovering from the pandemic, it is playing with fire. With the Evergrande issue, the country’s property boom – a major driver of economic growth – is also under threat. Are Chinese policymakers ready to neglect prosperous growth for increased control? Though the Communist Party sees the private sector as a threat to its authority, one can question the timing and scope of the reforms.

China estimates 2021 growth around 8%, but there are signs that the momentum has been lost and that the crackdown is a major growth impairment. Factory output slowed, retail spending decreased, and construction investment fell in the summer. The World Bank estimates that Chinese growth could be only 4% in 2022, a major slowdown from its 7.7% projection for 2021.

Moreover, if the crackdown impacts domestic growth and domestic stocks too much, the Chinese government is opening itself to risks of social unrest, as Chinese savers are being hurt by the measure taken.

Despite the slowdown in growth, are these valuations interesting for the tech sector? The Chinese Index CSI 300 Index is down 16.17% since its February high, while the Hang Seng index has seen an 18.85% drop in the same timeframe. Investors are heavily underweight China, and we believe that this could create investment opportunities. Some of these stocks appear to be trading at cheap valuations, though investors should have a long horizon and be prepared to weather some storms on the way. 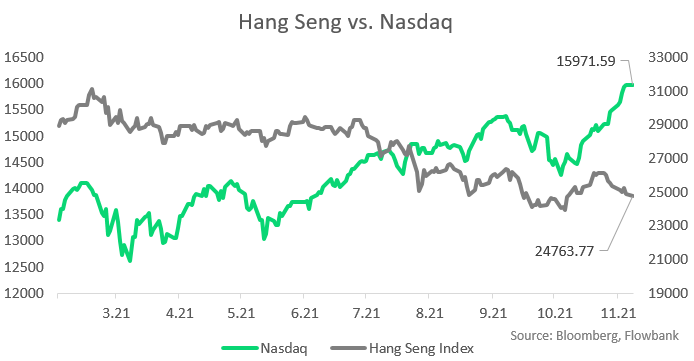 HSBC and Goldman Sachs both argue that although the country took a beating, it remains an investable market, especially considering that Beijing wants to double down on hard technology areas such as semiconductors. Clean energy also looks to be a promising sector as the country aims to reach carbon neutrality by 2060.

There is a major reset going on, but we doubt that Chinese policymakers will let its growth be smashed to smithereens, however strong their political convictions. While this fast change will likely impact near-term profits, it could make these businesses more sustainable in the long term, possibly presenting a buying opportunity. The situation looks grim in the short term, but we believe that tech stocks will re-bound over the long term.