This year’s shakeout in tech may offer substantial opportunities for investing in cloud infrastructure giants, benefitting from stellar growth fuelled by rapid cloud adoption and solid balance sheets. Could the market selloff be darkening investors’ perspectives?

Cloud infrastructure consists of all hardware and software components needed to support the delivery of cloud services to customers. It is flexible and scalable, making it ideal for enterprise computing. It offers an attractive return on investment with lower infrastructure and storage costs, flexibility, scalability, and security measures to counter cyberattacks.

It accounts for almost 50% of all stored data globally. And as data takes center stage in the secular trends of the future such as AI and automation, and real-time analytics for industrial, health, or consumer purposes, cloud infrastructure is key to hosting and processing the data.

Cloud infrastructure giants have developed well-established cloud businesses that together generated USD178 billion in revenues in 2021. The ‘sticky’ secular trend of cloud adoption continues to fuel growth, potentially offering unique investing opportunities. Data from Synergy Research Group shows enterprise spending on cloud infrastructure services grew 34% in Q1, from a year ago, the eleventh time in twelve quarters that the year-on-year growth is in the 34-40% range.

Who are the major cloud infrastructure players?

Amazon (AWS) leads with 33% market share, followed by Microsoft Cloud with 22%, and Google Cloud with 10%, together accounting for 65% of the market. 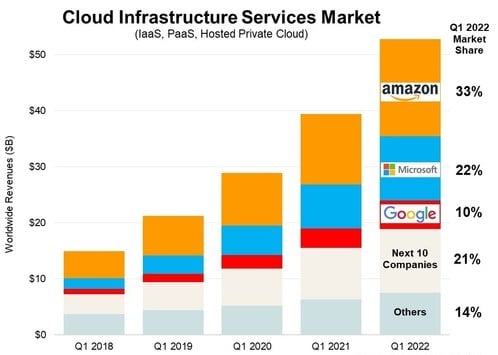 Amazon Web Services: In Q1, the giant grew faster than the rest of the market for the third quarter in a row. Its market share remains steady.

Microsoft Cloud: grew its market share at a rate of around 2% per year.

Google Cloud: grew its market share at a rate of around 1% per year. 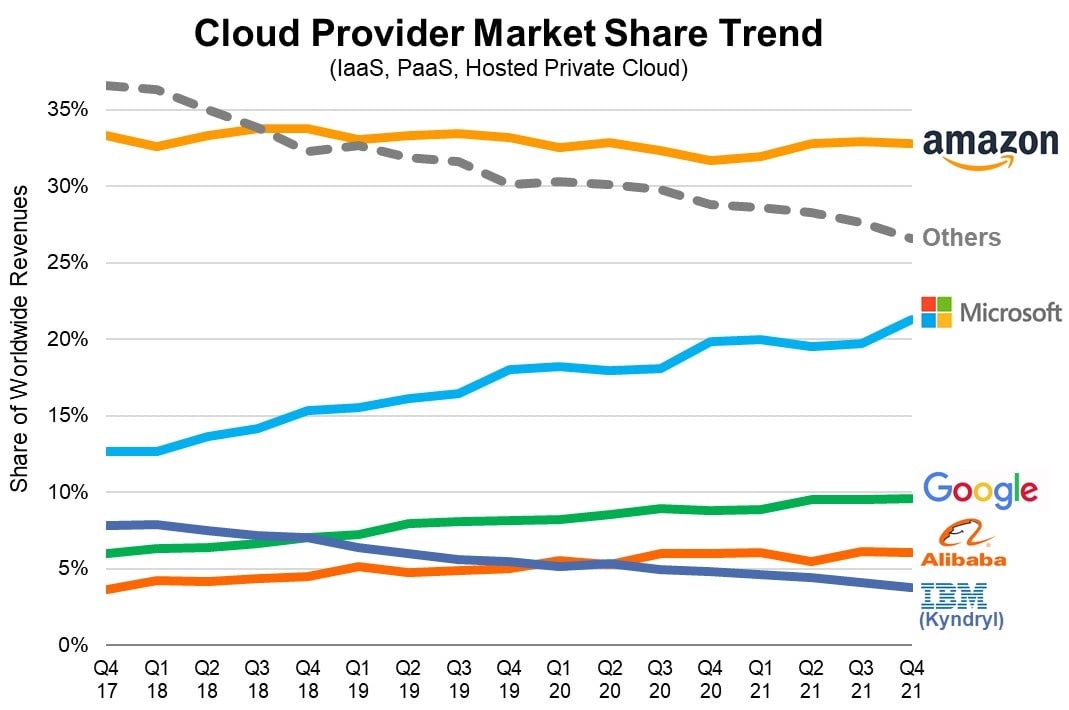 The superior growth rates of the three tech giants, growing at 35-50% per year, continues to be a major differentiating factor, leading them to grow their market share. Other players have continued to grow their revenue but at a slower growth rate of around 10-20%.

AWS revealed solid customer momentum in Q1 with cloud adoptions across many major industries. It landed new customers such as T-Systems, Verizon Connect, Telefonica, and Boeing, and announced new partnerships with database platform MongoDB and others.

Microsoft Cloud revenue grew 32% to USD23.4 billion, led by Azure and other cloud services which grew 46%, driven by growth in consumption-based services. Operating income increased by 29%. The company highlighted strong customer commitment to the cloud platform and robust sales execution in commercial bookings.

Google Cloud revenue increased a staggering 44% to USD5.8 billion in Q1, year-over-year. The Google Cloud segment comprises of i. Google Cloud Platform (GCP) which includes infrastructure, platform, and other services, as well as ii. Google Workplace, and iii. other enterprise services. In March it entered into an agreement to acquire Mandiant, a leader in cyber defense, in a transaction valued at USD5.4 billion.

The growth was driven by GCP, boosted by infrastructure and platform services. The quarterly operating loss decreased by USD43 million to USD931 million as expenses ramped up.

While cloud growth is spectacular, the recurring loss and the small size of the cloud business versus all the other businesses of Alphabet, doesn’t support the investment case for Alphabet based on the cloud potential alone.

Macro headwinds including rising costs and particularly wages, forex headwinds, and rising borrowing costs could hurt growth in the coming quarters. It remains to be seen, but a growth deceleration from here in the cloud space could also provide the 3 giants with opportunities.

Salesforce earnings revealed a bright picture for the cloud, mentioning not seeing any ‘material impact’. Similarly, earnings from Oracle Corp this week revealed its cloud infrastructure business had entered a “hyper-growth phase” which could deliver the firm “stellar revenue growth over the next several quarters”.

Q2 earnings in late July and early August should bring more clues on the state of demand for cloud infrastructure.

At the low of March 2020, cloud giants were offering “can’t miss” opportunities. In today’s environment, earnings resilience points to a solid outlook, even if growth slows.

But just how much have valuations come down?

It may be too early to tell as it will depend on potential future earnings revision, but overall valuation multiples have compressed significantly. For Amazon, the data is influenced by the 1-time loss on the Rivian stake last quarter.

Uncertainty remains about the non-cloud businesses of those giants that may be more affected by a slowing economy as budgets shrink. On the bright side, the pullback in the stock market may also accelerate M&A activity, such as the recent acquisition of VMware, a multi-cloud service for all apps, by Broadcom for USD61 billion in cash.

The strong growth tailwind from the cloud, combined with a significant correction in markets has compressed valuation multiples. The 3 cloud giants have succeeded in taking most of the market shares in the cloud infrastructure space and are equipped with giant balanced sheets, the more difficult economic situation may provide them with an additional advantage to grab market shares or snap competitors to solidify their cloud businesses.