Could Big Tech stage a rally?

In January this year, Big Tech stocks saw their largest pullback since March 2020. Faced with uncertainty surrounding the Fed’s tightening cycle, supply-chain issues, and war in Ukraine, investors have shied away from “buying the dip”. Will Big Tech stay in the penalty box or is it primed for a rally?

Big Tech has certainly benefited from the world’s increased reliance on digitalisation following the pandemic, but worries have surfaced since, with central banks tightening and the end of government stimulus being the greatest. Rising raw material prices, shipping fares, and major supply-chain issues amplified by the war in Ukraine add to the challenges Big Tech faces.

On top of that, the regulatory environment continues to evolve quickly, and business models must constantly adapt to remain successful. For example, in February, Meta Platforms saw its stock lose 40% of its value as investors worry changes in the Apple IOS user tracking could significantly affect Meta’s ability to profit from targeted ads. Meta’s spending of USD10 billion in unproven metaverse business also pressured the stock.

Key earnings reports to watch in the next few weeks will be Apple, Microsoft, Amazon, Alphabet, Tesla, and Meta, which together make up 45% of the tech-heavy Nasdaq 100, and 24% of the S&P500. 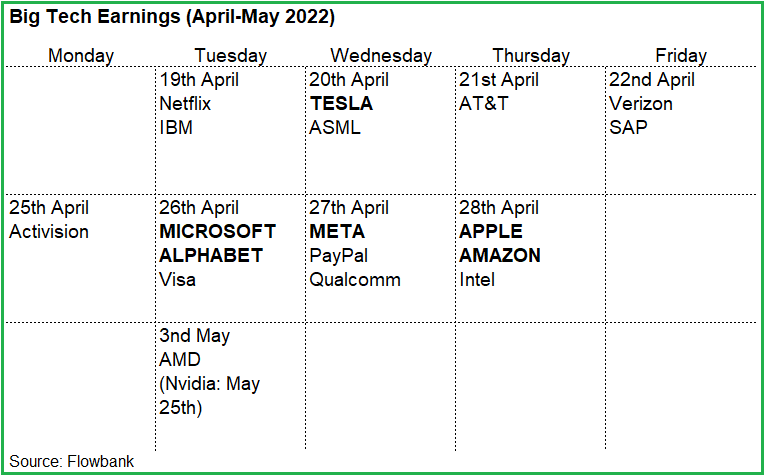 From FOMO to panic

Stock market headlines have evolved from discussing the immense growth prospects of cloud computing, gaming, advertising, semiconductors, EVs, big data and AI, and other high growth areas of technology, to obsessing about inflation and tightening expectations from the Federal Reserve.

The high-growth potential of technology is being ignored in the shorter term as investors weigh the effects of rising costs on corporate margins and the higher costs of money on stock valuations. Future cash flow 5 or 10 years down the road are worth less if borrowing costs are closer to 3% than when long-term borrowing costs were around 1%.

The market has largely ramped up expectations of interest rates hikes as can be seen with the steep rise in the yields of the 2-year US Treasury Notes since the start of the year. 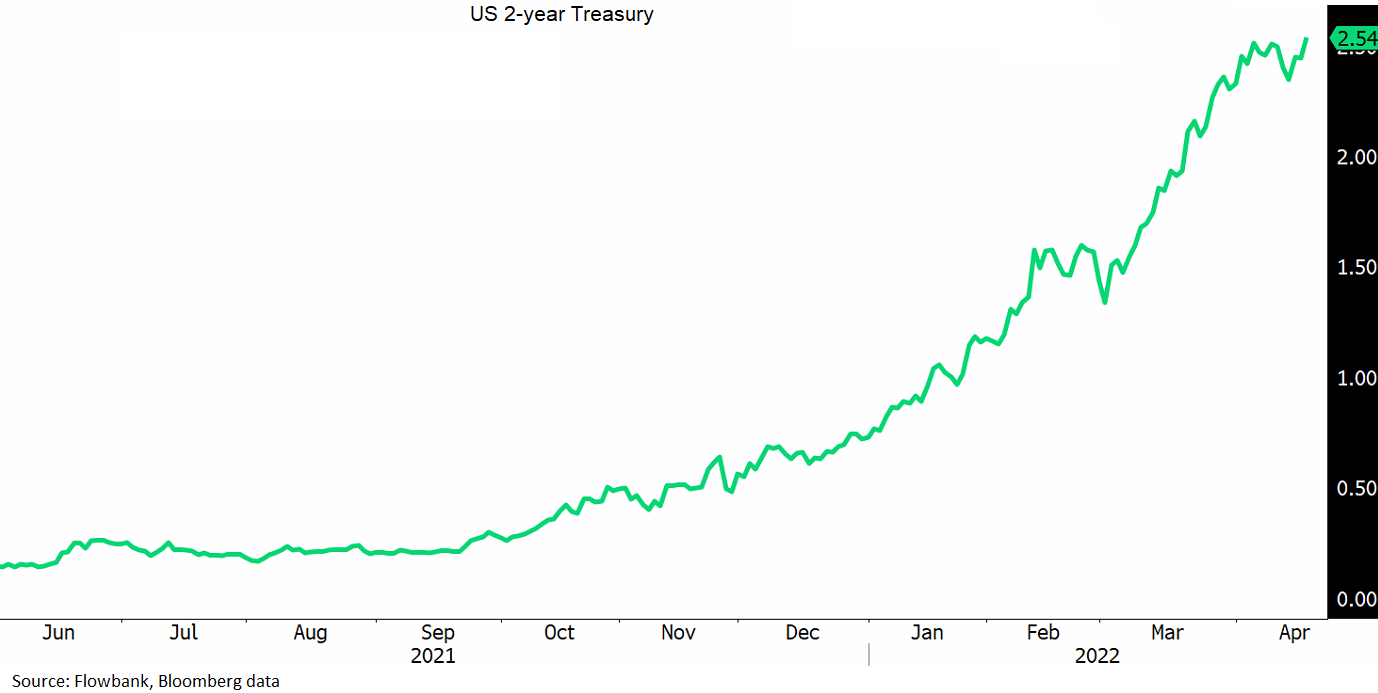 On top of that, investors are faced with the Fed’s plan to gradually reduce the size of its balance sheet, which could pressure markets as it removes liquidity.

However, the picture could brighten as inflation expectations come down later this year, and Fed officials become less alarmed over the necessity to raise rates to combat higher prices.

The forces that could drive Big Tech higher

Besides the near-term uncertainty of war and lockdowns in China, there are several factors that could come as favorable surprises for Big Tech investors.

Major tech giants have shown interest in stock splits, which could act as a boost in sentiment, supporting their stock price as we near the date of the stock split. Stock splits should stir up interest from retail investors as it makes Big Tech individual shares more accessible.

Amazon: The e-commerce and cloud giant announced a 20-for-1 stock split, set to take effect in early June. The stock price will drop from roughly USD3’000 to USD150 per share.

Alphabet: The advertising and cloud giant announced a 20-for-1 stock split, set to take effect on the 15th of July. The split will lower the stock price from roughly USD2’600 to USD130.

Tesla: In late March, the electric automaker announced its intent to split its stock for the second time since August 2020. More information should be known at the next shareholder meeting, generally held in June.

Since 2018, through stock buybacks, Apple has reduced its share count by 19%, Alphabet 9%, Microsoft 3%, and Meta 1%. These record buybacks are set to continue as profits and cash flow grow. M&A ambitions could also offer upside catalysts should tech giants find candidates that could provide synergies. For example, Microsoft in January announced it intends to acquire gaming giant Activision Blizzard for USD68.7 billion in cash. If the deal closes, Activision is set to add more the USD2.5 billion in net profit per year to Microsoft Corp.

In addition, investor positioning according to fund flows of the Invesco QQQ Trust (which tracks the Nasdaq 100), is modest amid a downbeat market sentiment this year.

Market sentiment remains extremely poor. Earnings may brighten the picture in the fog of uncertainty. Investors will be looking for clues on how the current environment is affecting growth and margins.

The technical picture reveals the Nasdaq100 has consolidated since the start of the year, making higher lows, which is a positive momentum factor. However, it is important that the index remains above its March lows. Should the 200-day moving average (15’140) be taken over it could be interpreted as a positive signal. The relative strength index (RSI) still suggests the Nasdaq100 is slightly oversold and has room to catch up on the upside.

Looking at the Nasdaq100 since the end of 2018, it is still trading at demanding valuations, although much has changed since with high-PE stock Tesla taking a significant slice of the index. Investors should be constructive as valuations have come down by a wide margin from their highs.

Juggling a period of central bank tightening together with major macro headwinds may make any significant rally difficult to hold in the short term as investors may be unwilling to add to risk-on bets or pay for higher PE multiples. Nonetheless, the inflation & supply chain picture should improve, and earnings should prove resilient. Under a scenario where earnings growth remains strong, we should not rule out a bumpy rally as markets climb a wall of worry, with the highest quality assets rallying first.