The Coinbase IPO is the most exciting stock market event for cryptocurrency enthusiasts ever. BUT it faces challenges from regulation and competition. Could Coinbase be worth $100 billion ?

The mantelpiece of the crypto economy...

Coinbase is a digital currency wallet platform that allows traders to buy and sell digital currencies like Bitcoin, Ethereum and altcoins. It was started in 2012 by Brian Armstrong and Fred Ehrsam and is currently the largest crypto currency exchange in the US by trading volume.
Coinbase is at the center of the bitcoin trading surge and has benefited from recent upswings in Bitcoin demand. They offer investors a digital wallet; its infrastructure is built upon what is called a blockchain (thus the decentralized ledger). The company's goal is ambitious; to create a new open financial system and enable the future of money everywhere. Coinbase also enables peer-to-peer exchange of crypto currencies all over the world.
The company makes money via fees from its brokerage side, nothing innovative there. Coinbase is also a custodian for user funds, much like a bank, and it gets to select which crypto assets are listed or not on its platform exchange. Custody provides controls and storage solutions for its institutional investors and as of the end of 2020 Coinbase custodied over $90 billion in total fiat and crypto assets. With secure storage comes greater trading volume as trust builds. Since inception, customers have traded over $456 billion on the Coinbase platform.

Getting to know Coinbase from their S-1 filing...
Coinbase clearly benefited from the surge in Bitcoin prices this year as retail and institutional investors jumped at the opportunity to get involved, many of them trading via Coinbase. The firm boasts of 43 million retail users and a healthy quarterly trading volume that doubled from $17 billion in 2018 to $38 billion in 2020. There are 7000 institutional investors, and 115,000 ecosystem partners in over 100 countries. Ecosystem partners are developers, merchants, and asset issuers. 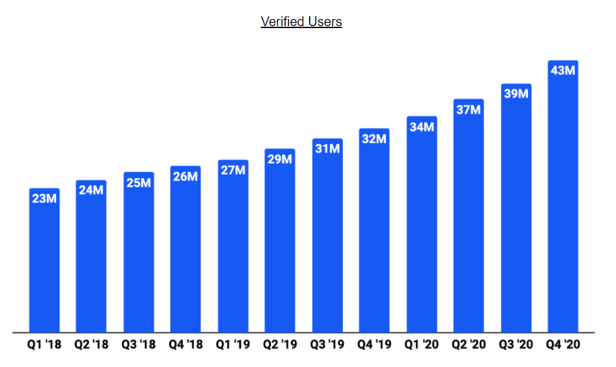 Coinbase positions itself at the center of what they call the ‘’early stages of the crypto economy’’. This could categorize Coinbase as a growth company, however growth has not been linear because of the company’s relationship to Bitcoin prices. Growth has been aligned with crypto asset price cycles which tended to be volatile in past couple of year. However, looking at the evolution of Bitcoin’s price since 2011, the trend has gone upwards on average, much like a S&P 500 would. 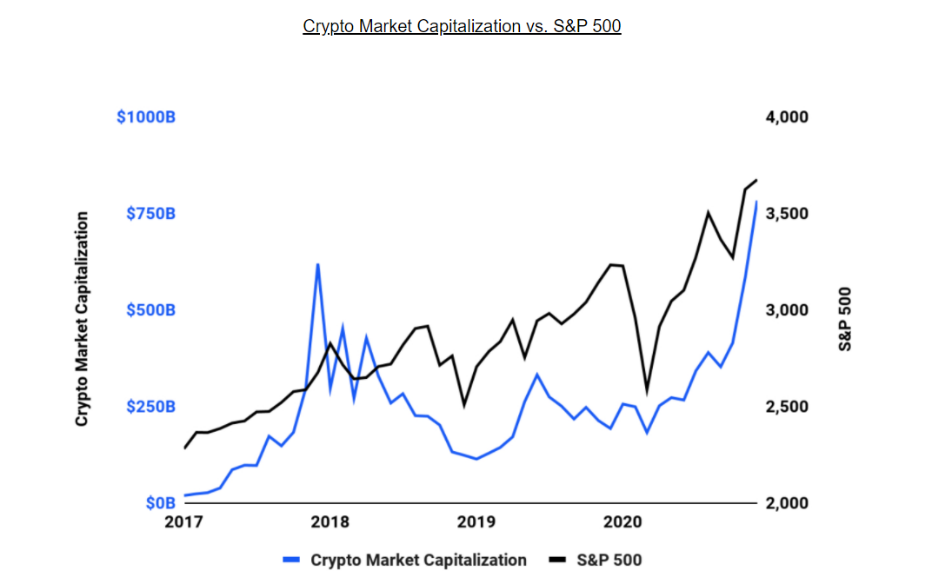 Between 2012 and 2020 Coinbase generated $3.4 billion in total revenue mainly from transaction fees. Transaction revenues increase $633 million from last year primarily due to a 142% YoY increase in trading volume. Subscription and services revenue increased $25 million where $15 million of that was driven by an increase in custodial fees from a rising number of customers. Coinbase’s reliance on transaction fees underlines to a business model weakness but fear not as the company has launched new products and services in storing, saving, staking, borrowing, and lending, in which they generate revenue based on a percentage of the assets on the platform participating in the product or service.
With the rise of DeFi and new competing altcoins, the company has seen a huge change in bitcoin trading volumes in 2020, making more room for the other up and coming altcoins and diversifying away its risk. Coinbase has an incentive in seeing more competing currencies in hedging its reliance on Bitcoin. Cardano’s ADA for example is now third on the dashboard by market cap, surpassing Binance coin, Tether and Polkadot’s DOT. 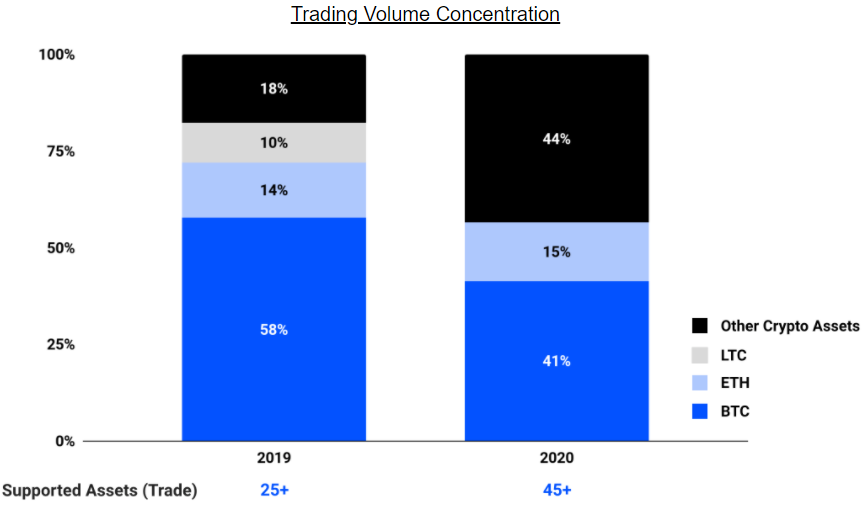 While Coinbase saw a trading volume of $45 billion from retail investors in the first quarter of 2018, the last quarter of 2020 showcased a record number of institutional investors with $57 billion in trading volume. The reversal is significant for the company as more large-scale buyers are coming in and adopting the new technology.

The private secondary markets on Nasdaq value Coinbase between $50 and $100 billion. The last quarter generated $600 million in revenue which equalled the previous three quarters annualizing over $2 billion. If BTC and ETH continue to rise, likely so will Coinbase’s trading volumes and thus core business. Institutional investors want more, which is good news for the next stages. Coinbase could see increasing prime brokerage business revenues as more institutional investor pile in (as stated previously with a switch from retail to institutional as a share of trading volume).

According to Lex Sokolin, Coinbase's private valuation has hovered between a 20X and 50X multiple depending on the year. This year, that multiple could touch the higher end of the range if the IPO goes to plan.

Revenues per user is around $50 for the 43 million users reported with an implied $2,600 valuation per user, higher than the average $1000 neo-banks typically see. However, according to the ARK Invest Big Ideas reports, digital wallet users could become $20,000 customers.
So far, the valuation is reported to be around $77 billion with shares trading around $303 in the private market. This valuation implies that Coinbase is larger than Intercontinental Exchange Inc, the owner of the NYSE. When the firm goes public, there will be around 254 million outstanding shares for public bids. All in all, this could be one of the most exhilarating IPOs of 2021.

Coinbase IPO will need to jump some hurdles...

While Coinbase has seen an improvement in revenues and net income as of late, the business faces obstacles, too. They are dealing in a very volatile asset class, with crypto currencies seeing large swings in prices. Their revenues are strongly correlated to a performing bitcoin as it attracts more users and falls in prices could slow down the machine. Cyber-attacks and security breaches of the exchange could adversely affect the business’ brand and reputation and push customers to broker elsewhere.
Competition in the crypto space is also very high, and subject to uncertainty with regards to regulations. The legal landscape presents Coinbase with rapidly changing tides in regulatory hurdles, much of which could go against its business interests. For example, a particular asset’s status as a ‘‘security’’ in a jurisdiction is subject to a high degree of uncertainty and if Coinbase is unable to properly characterize a crypto asset they could be liable and subject to regulatory scrutiny.
Regarding competition, Coinbase faces many decentralized and non-custodial platforms that are more specialized and could arm wrestle Coinbase for the future of the crypto economy. Some of the players they compete with face less regulations and could take advantage of this position to further their share of the market as Coinbase increases its exposure to more regulation.