Dating apps offer a unique success story on their own. Discover the latest app novelties and whether the leading matchmaking apps could become key market darlings. And, is it time to ‘swipe right’?

In that sense, with the immense reach of technologies, dating or ‘meeting’ apps are having enormous success, with around 323 million users worldwide and a reported 4.6 billion in revenues (2021).

People use apps to seek friendship, love, and business opportunities, while apps benefit from competitive advantages such as network effects and scalability. One of the first dating app that saw enormous success; Tinder, brought popularity to the feature to ‘swipe right’ to indicate that you like another person’s profile. The feature has since been adopted by most dating or ‘meeting’ apps to enable users to choose whom they ‘match’ with. A study shows 34% of users of dating apps scroll around to ‘do something fun’, in a similar fashion to the gamification of social media, accelerated with the rise of short-form video content.

What are the latest dating app novelties?

Dating app platforms continue to innovate with new ways to increase engagement, build trust, and improve the online dating experience with user-friendly features. Apps are also pushing harder to offer users more ways to narrow down to search for precisely what they are looking for. After all, we are in the age of customisation and people are looking for time-saving tech and instant answers without going around in circles.

Since the viral success of social media Clubhouse, where users communicate in audio chat rooms, dating apps are faced with more evidence that adding audio would be key to retain users on the app for longer. In that sense, audio message features are common, and in-app videos are also appearing as users demand more authenticity and to display their personalities in new ways.

Dating app Hinge (‘the dating app designed to be deleted’) rolled out its ‘voice prompt’ feature late last year, where users can record an audio message of up to 30 seconds in their profile. 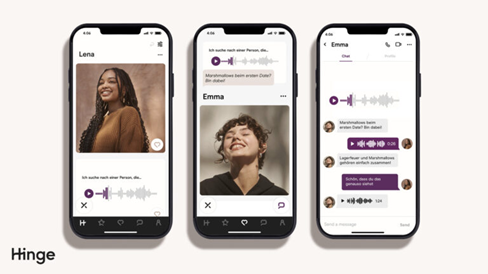 Others such as Bumble and Happn also added similar features as audio and video become the new form of communication, or at least for the younger users (Gen Z). Short-form video features are also quickly being rolled out after the success of TikTok demonstrated that it could make users ‘go viral’ and formed strong retention amongst users.

Earlier this year, Tinder introduced Swipe Party, a feature in which the Tinder user can virtually invite friends to participate in ‘swiping right’ or in other words ‘vetting’ each potential match candidate. The feature is a techy answer to what is already a popular offline activity amongst users. The co-browsing is enabled by users allowing access to their phone’s camera and microphone, to discuss candidates with friends.

Tinder also organises digital interactive events such as its ‘Swipe Night’, where users team up to crack a case by investigating and virtually searching different rooms in the ‘house’. Competitor Bumble launched its own version called ‘Night In’, where users are taken to a holding screen on a video feed to start the virtual date. The feature incorporates virtual games to offer users ways to break the ice.

A survey showed half of dating app users said this year they would focus on themselves instead of wasting time on people that don’t match what they are looking for. In response, Bumble is testing a speed-dating feature where users chat before ‘matching’.

In a similar fashion, to improve engagement, apps are looking to offer users ways to match them with exactly what they are looking for. As an example, French dating app Fruitz, recently acquired by Bumble, developed its app specifically around what users seek, allowing users to filter out those that are not on the same page as them.

More established player, Bumble is also famous for its multi-app approach where users can switch between Bumble ‘date’, ‘bff’ for friendship, and ‘bizz’ to connect with people on a business level. The bizz mode will match users with professionals in their area, both in terms of location and in area of interest. 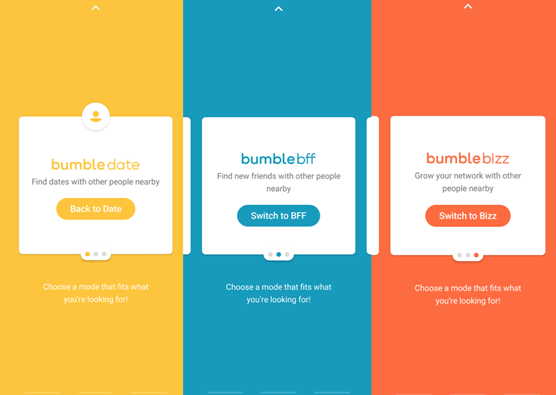 More segmenting exists by smaller apps too. Match Group launched earlier this year its latest app called Stir, meant for connecting single parents, which are a community of around 20 million in the US alone. Leading app Tinder added a “discover” section like social media feeds, where users can see potential matches who share similar interests with them, like if someone has pets or is into horse riding.

What are the dating app stocks?

Apps make money with ads and by selling paid subscriptions to the roughly 20 million users that pay for access to premium features such as extending the clock on ‘matches’ that would otherwise disappear after 24 hours (Bumble). 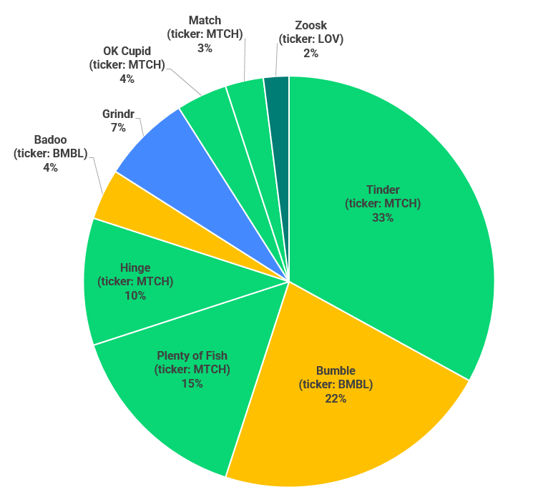 It reports 16.4 million paying users and grew operating income 24% in compounded annual growth annually from 2017 to 2021. In its June 2022 investor presentation, it notes to seek to evolve more toward video and live experiences, more community aspects, the ‘getting to know you’ phase online, and towards AI and AR driven experiences.

Bumble Inc. (ticker: BMBL) is an American tech company that owns Bumble, Badoo, and Fruitz. With its accent on women making the first step (for its ‘date’ category) and longer-lasting relationships it rapidly established itself as a leading app.

It became the main competitor to Tinder when it reached more than 100 million users in 2020. In recent years, Bumble has come up with many innovative features and has shown that it is possible to cater to users all looking for different things but on the same app (Bumble ‘date’, ‘bff’, or ‘bizz’). Bumble Inc. has over 3 million paying users, up 31% year-over-year, and revenue increased 18% year-over-year to USD220.5 million (Q2, 2022). Revenue increased 33.2% for the Bumble app and declined for Badoo. As of June 2022, the average revenue per paying user of the Bumble app was USD29.38.

With the two market leaders Match Group and Bumble in a fierce battle to win market shares, innovation is a key differentiating factor. New features can quickly be copied however, and the two incumbents benefit from deep pockets to develop tech novelties to their full potential. With a clear demand for people to connect with each other digitally, dating apps could be well-positioned for growth in the years to come.