With Germany on the verge of a winter power crisis and a possible recession, it’s a wonder the country’s benchmark index the DAX 40 is holding up so well.

Is the index showing relative strength for the next leg up in global markets or is it only a matter of time before investors wake up to the harsh reality facing the German economy?

While the index is down over the past quarter, things have been quite resilient at the individual stock level. With the largest weighting, Siemens (SIE) has been a drag despite the modest price decline. Allianz (ALV) has seen the biggest percentage decline while BASF (BAS) and E.ON (EOAN) also experienced big dips. On the flip side, Merck (MRK) has been a top gainer alongside Deutsche Telekom (DTE) and Beiersdorf (BEI).

While the standout gainers are few - so too are the heavy losses. In what has been a period of massively increased uncertainty, the DAX 40 has shown to be something of a haven for stock investors.

The DAX saw big declines in March when the war broke out in Ukraine because of its energy dependence on Russia, which was heavily sanctioned. However, there was a successful test of the March lows in June - even as the S&P 500 made successive lower lows.

Contrasting the performance of the DAX 40 with the S&P 500, it’s notable how the DAX rose much less during the post-COVID rally of 2020 and 2021 but has also fallen less during the 2022 pullback.

Investors have been attracted to stocks with lower volatility this year and shunned high volatility stocks, especially growth stocks and those in the tech sector.

The pivot from growth to value has benefited the relative performance of the DAX 40 and other European indices that have a higher weighting of traditional industry versus Information Technology in the United States. Tech stocks boomed in the era of low rates and low inflation but have been crushed as inflation hit decade highs and central banks scramble to raise rates in response. While the rate-hike cycle continues, the DAX should continue to benefit from the growth-to-value dynamic.

International investors cannot afford to ignore currency effects on their investments - and this year has seen a clear advantage for Europe over the US. The US dollar has gained over 10% versus the euro in 2022, making European exports relatively cheaper and also boosting the value of overseas earnings by European corporations when translated back into the devalued euros.

Looking forward, investors have been questioning whether the Federal Reserve is close to a ‘pivot’ away from rate hikes as US inflation peaks and the country risks recession. Should that happen, some of the positive currency tailwinds would be removed from Europe- possibly pressuring the DAX. For the time being, the Fed appears to be holding its course. If the bull market in the dollar continues, European stocks could continue to look relatively more attractive.

The other swing factor is ECB policy. The European Central Bank has only raised interest rates once despite sky-high inflation. This can partly be explained by widening yield spreads across Europe. The German-Italian yield spread recently hit 2.5%, its highest since the covid panic in 2020. Higher rates from the ECB disproportionately hurt peripheral and more indebted economies. The ECB is waiting for inflation to moderate but if fuel costs remain elevated and keep inflation high,  then the central bank may be forced to hike more aggressively- possibly forcing up the euro and pulling away the currency advantage for European stocks in the process.

For the now the biggest ‘known unknown’ is the self-inflicted wound of an energy crisis in Germany and wider Europe. A planned complete ban on Russian oil and gas by the end of the year when stockpiles are already low following sanctions could cripple the European economy and cause a recession. The accompanying policy of ‘power rationing’ that some European governments have already been threatening could also mean another severe blow to investor and consumer confidence so soon after the covid-19 pandemic. 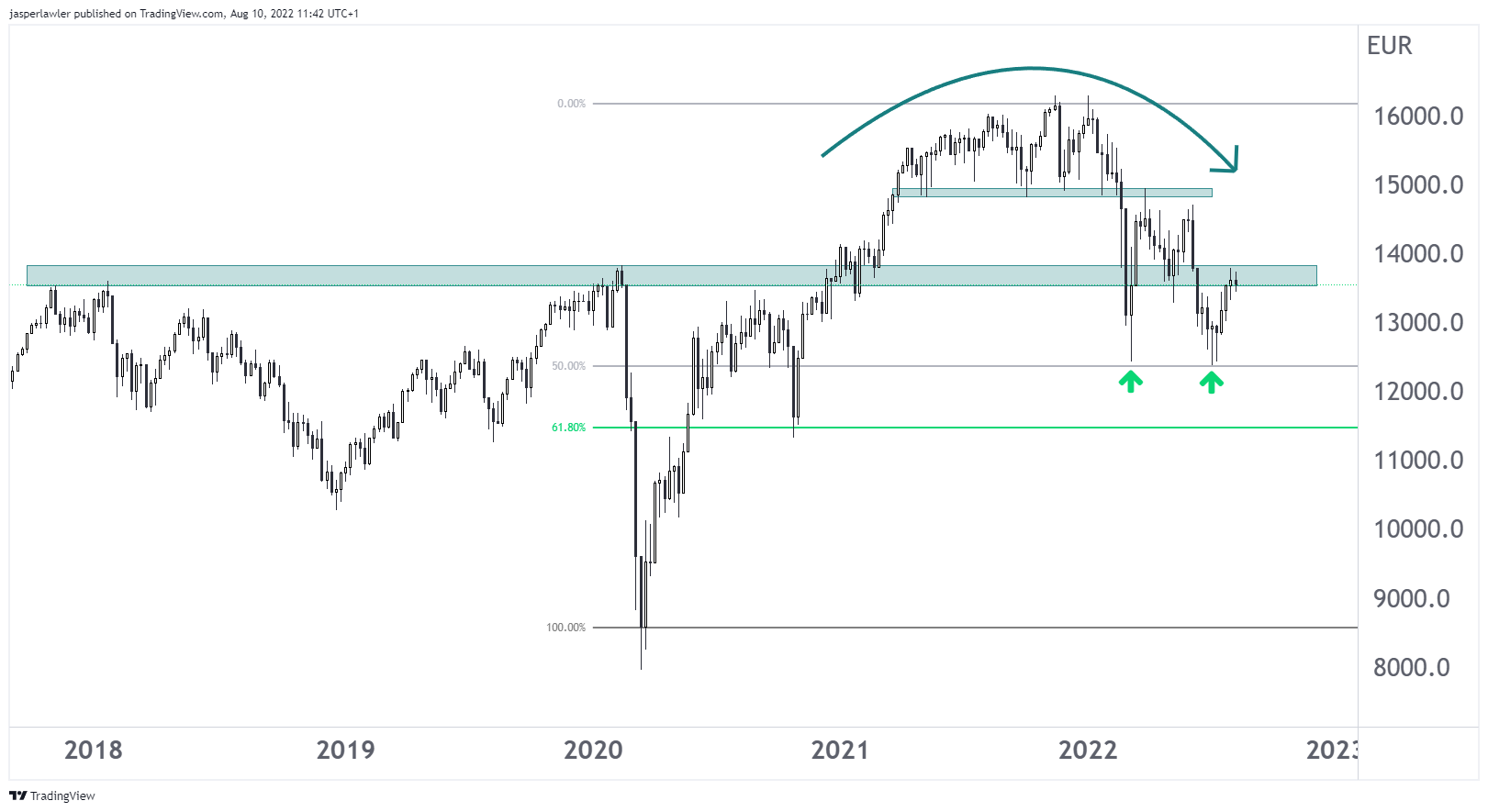 The 13,500-800 zone formed by the two former pre-covid highs is now a critical pivot. While the price is below there, chances are greater for a drop to fresh yearly lows - perhaps down to the 61.8% retracement at around 11,500. While above the pivot, prices look more likely to rebound to 15,000 and above.