The ICP project wants to revamp the massive global computing economy by offering a decentralized cloud computing platform. Like most disruptive projects, it faces incumbent and scalability hurdles ahead.

Platform risk is plaguing the tech world. The smaller tech companies building on top of Big Tech APIs are at the mercy of service providers. When LinkedIn, or Facebook changes the rules, when those guys change or the revoke APIs, a major risk arises for those who build on top of said platforms (thus platform risk).

Zynga who IPO’d for $10B, that social gaming company built off of Facebook, saw its valuation tumble when Facebook decided to revoke some APIs. In other words, if you build on top of Big Tech, you are building on sand. An increasing number of tech companies doing IPOs state in their financial statements that platform risk is now a major existential problem to their long run growth. Is this climate conducive to an enterprising free market?

Big Tech will not relinquish its position to the types of protocols like Internet Computer, and if anything, they will only keep growing via consolidation as the government tiptoes around monopoly definitions. See the image below for a stark reality check; this is what consolidation looks like.

Letting Alphabet buy Deep Mind, and Facebook  buy Instagram and WhatsApp is a clear threat to consumer privacy since everyone knows ad revenue is the main driver rationalizing those purchases in the first place.

Figure showcasing what technological consolidation looks like at Alphabet

The internet started off providing connectivity which enabled the rise of great applications we use every day, including things like Google and Facebook. But today, the internet needs a makeover. This makeover is taking place on one hand as a natural retaliation to the growing control Big Tech has over user data, and on the other hand as decentralization can unlock enormous gate-kept economic value. ICP will be able to host secure software systems and open internet services via an entirely new system.

Dfinity is the Zurich-based foundation behind the Internet Computer Protocol (ICP) whose goal it is to revamp the internet’s backend using cryptography, and advanced computer science. They are re-developing the backend using blockchain technology, while the front-end (which is your user interface) will not change that much.

Imagine ICP as a portal where one can code new applications that do not rely on a central server. Because of its decentralized nature, firewalls, VPNs, anti-virus, and most cyber security technology is going to fall off a cliff and be replaced by a fully integrated blockchain protocol whose smart contracts (the software in the backend basically) are tamper proof from hacks.

Such things like websites, enterprise systems, Decentralized apps, and tokenization can all make use of the ICP as a public cyberspace to build new things. This should ring a bell—it is like Ethereum’s role in DeFi building, but ICP wants to go one step further by reimagining the way internet is used to power DeFi.

Examples of use cases include photo storage and taxi services. With file and image storage, users are not reliant on service providers to protect the security of their information; with taxi services, drivers can keep a higher level of earnings because the ICP is paid for via staking. The list goes on and on and new services we do not even know we need will arise from this independent network.

ICP started trading last week on major exchanges like Binance, and quickly found its way to the upper echelons of the food chain. As of this writing, coinmarketcap.com shows ICP in ninth position with a $26B market cap, right behind sister project Polkadot’s $37B market cap. That is a major valuation in so short a time, but it makes sense considering the next analogy:

With ICP, we are looking at a new AWS. Amazon Web Services (AWS) is sort of the backbone of the internet today, and dominates cloud computing services. Most data are stored on Amazon servers because it is cheaper for companies to rent server space versus incurring the large fixed costs of building and maintaining their own units. But this gives such service providers major market power.

Amazon’s AWS division saw a revenue stream of $45B. That is $13.4B in AWS revenue every quarter and furthermore, it is growing at a rate of 32% year on year. But that’s just Amazon—the total addressable market is in the low digit trillions if you include Microsoft and the others. In 2020, the top four players AWS, Azure, Alibaba, and GCP, had an aggregate revenue of $86B in the global IaaS (Infrastructure as a service) and PaaS (Platform as a Service). Not bad at all—so what does a standalone AWS business look like for comparison’s sake to what ICP could tackle? 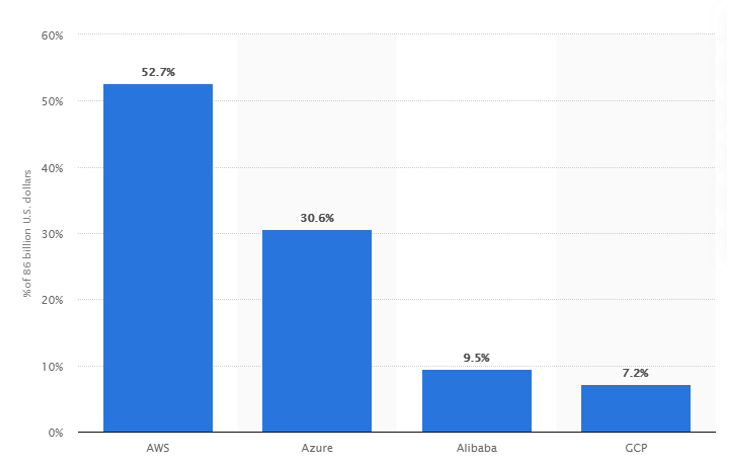 In 2019, when revenues from AWS were $34.6B, Trefis derived an EV/EBITDA multiple of 30X assuming a growth rate of 35% per year (which comes out to $46.71B in 2020 i.e., just $1.71B off from reality). This sort of multiple on actual earnings represents a figure North of $400B as a standalone enterprise value. That is not a terrible business to pursue.

Now that we understand the sort of value that exists in cloud computing, it makes all the more sense for projects like ICP to exist, and to bring alongside it top human capital to develop it. Dfinity has raised $163 million via private funding rounds and aims to use these funds to expand its network of data centers and developers.

Right now, the nonprofit is running seven subnets with 68 participants across 12 data centers. Their ambition is to push 123 data centers and 4,300 participants (called nodes) by the second half of 2021. The prospect for the ICP token growth is tied to this incoming expansion, and lastly, the project is backed up by world-famous Andreessen Horowitz and Polychain Capital.

Metcalfe’s law will work its magic just like it did in helping Web 2.0 expand, so the figures mentioned by the foundation above for H2 are reasonable if not conservative. Much like the recent relative momentum Ethereum has seen as their network of nodes has continued to grow, so could a protocol so inclined towards re-building a user-oriented internet infrastructure. In other words, by virtue of ICP’s network platform infrastructure it too could benefit from Metcalfe’s law (more connections in a network means exponential growth in the network’s value).

This is not to say it will be an easy achievement, especially as other Swiss-based Web3 foundation backed Polkadot, and separately, the Chainlink project, begin rolling interoperability protocols going head-to-head with ICP’s.

Other risks exist in achieving further growth in the decentralized systems space. Take attracting a permanent user base for example—positioning oneself as competitive versus complimentary to already dominant platforms like Facebook will be hard (look at Steemit as an example). This will make market entry difficult because of that network effect (i.e. you go where friends go).

More importantly is the developer side—why should developers choose to switch to a new data model and then, what is the incentive for guys like Facebook to make their data interoperable with ICP if they can already capture all the value themselves?

Back to the user side—it will be critical for ICP to balance out security and usability to scale. IPFS which is a new way to decentralize IP addresses has struggled with this. However, Signal, a messaging app you can download on your phone and that I use, is proof that balancing cryptographic security and usability is possible.