More and more companies are racing to bring all-electric vehicles (EV) to market as consumer tastes shift and investor enthusiasm for the space grows. In this blog post, we take a closer look at China-based EV company NIO, a company which is viewed by many analysts as the “Tesla of China”. Who is NIO?

NIO was founded in November 2014 by William Liirman of Bitauto and NextEV. After launch, several companies invested in NIO, including Tencent, Temasek, Baidu, Sequoia, Lenovo and TPG. Its first model, the NIO EP9 sports car, debuted the same day the brand was established.

Unlike Tesla, which has tried battery swapping but has never deployed it on a large scale and relies instead on its Supercharger network, NIO has built a functioning network of 131 battery-swap stations that covers a few thousand kilometers of Chinese expressways. The first phase was installing 18 battery-swap stations in 14 different places along the G4 expressway.

In October 2016, NIO announced that it had been given an "Autonomous Vehicle Testing Permit" by the California DMV and it would begin testing on public roads under the "Autonomous Vehicle Tester Program" guidelines as part of its autonomous vehicle program. According to the company, it planned to launch vehicles with level-three and level-four autonomy.

In September 2018, the company filed for a US$1.8 billion initial public offering on the New York Stock Exchange.

In late April 2020, NIO announced ~$1B in new funding from a group of Chinese investors, which was needed due to the company's struggles to sell its vehicles. As part of the deal, NIO would transfer assets to a new subsidiary called NIO China, which will be headquartered in Hefei.

NIO has seen its stock more than triple since the start of the year (see chart below). The company now has a market capitalization of $15.7 billion. 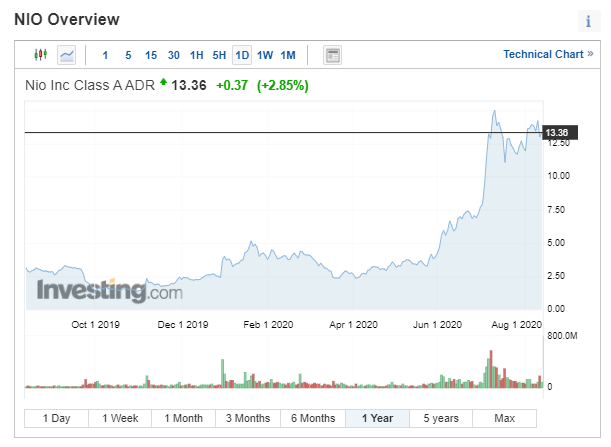 The Chinese EV company’s EPS came in at -$0.15, an increase of 66.7% as compared to the same quarter a year back. It was also higher than the analysts’ estimate of -$0.26. Its revenues were also 5 percent higher as compared to consensus estimates. Another milestone achieved by the company during the quarter was the first positive cash flow from operations and also a first positive gross margin.

While commenting on the results, NIO CEO William Li said, “Beyond the strong order growth, we are proud to reach a milestone quarter with respect to the key financial metrics of the Company, highlighted with the historically high vehicle gross margin of 9.7 percent, lowest-ever operating losses and more importantly, positive cash flow from operations for the first time in our history.”

With regards to guidance, the company is projecting deliveries of between 11,000 and 11,500 for the third quarter. This implies an increase of more than 132 percent year-over-year. Notably, in Q2, NIO achieved record deliveries of 10,331. The expectations of a further increase over the record quarter showed robust demand and increased management confidence in the market and its own capabilities.

Bank of America Merrill Lynch (BofA) is bullish on the stock

The guidance for 11,000-11,500 vehicles in the third quarter suggests strong order momentum, the analyst said. Predicating the move on the better-than-expected quarterly results, BofA raised its 2020 NIO volume estimate by 9% and reduced the net loss estimate by 13%. The firm also narrowed its 2021 and 2022 net loss estimate by 3% and 28%, respectively, citing higher gross profit margins and lower operating expenditures.

It is worth reminding investors that NIO is a very high-risk stock. Not a long time ago, investors were concerned about NIO’s liquidity. Then, things started falling into place for the EV-maker. The initial catalyst was the company’s financing arrangement with the Hefei government. The macroeconomic landscape has also been improving due to auto demand recovering in China. The country’s push towards EV vehicles has helped NIO. Due to the battery swap technology, NIO is eligible for EV subsidies.

The long-term potential for Electric vehicles (EV) in China remains huge. EV penetration in China is still very low. As China aims to increase the share of EVs in the overall auto market to 25 percent from 5 percent in 2019, NIO is one of the companies that can help the country reach this goal. China prefers domestic companies over foreign ones. Although the Chinese government has supported Tesla, it will likely keep prioritizing local firms if the need arises. As a result, NIO has a huge advantage over many of the other companies. Also, NIO’s cars are very well-liked in China.