A lot has happened since Elon Musk offered to take Twitter private for USD44bn. Tesla investors are worried the deal could bring a dark cloud on Tesla, at a time when the billionaire’s focus may be critical to helping the automaker navigate the current crisis. What are the major changes Musk plans for Twitter, and could it harm Tesla shareholders?

The serial entrepreneur’s adventures in Twitter began on January 31st during which he quietly started accumulating shares, revealing a 9% Twitter stake on April 4th. On April 14th Musk offered to buy Twitter for USD54.2 per share and ‘unlock’ its potential.

In May, after the board accepted the offer and markets continued to trend lower, Musk threatened to walk away from the deal due to the belief that an enormous number of bots (fake users) exist on the platform, that is not disclosed publicly and would greatly reduce the number of real ‘users’, which advertisers pay for.

On June 6th Twitter received a letter from Musk asking to provide the data on Twitter spam bots, or he could terminate the deal. Some analysts believe it could be a negotiating method to lower the acquisition price after the market turmoil.

The trend is seen across the industry with just recently PE firm Thomas Bravo reducing its buyout price for software company Anaplan by 3%. Instead of entering lengthy litigation, the acquirer is often better off agreeing to a small discount. For Twitter, the story may be different as there may be an issue with fake users and Musk may be looking for a large discount.

The Tesla CEO has made clear free speech is a top priority, with measures to restrict offensive content to make the platform as attractive as possible.

During a virtual Q&A with Twitter employees in mid-June, Musk highlighted his vision to make Twitter a super-app, like WeChat, a leading Chinese messaging, social, and payment app.

He also shared a goal for Twitter to attract 1 billion users or about 770 million more than it has today and is considering charging a fee to verify accounts. The blue Verified badge on Twitter lets people know that an account is authentic. He plans to make it more like TikTok, serving as an entertainment venue. News is also a focus with real-time as some users deliver ‘front-line’ news.

Adding payments is also a top priority. In that regard, Musk is also a vocal supporter of the meme cryptocurrency Dogecoin, which he tweets about often. Musk is being sued by a Dogecoin investor, alleging it is a “pyramid scheme”. Crypto enthusiasts have continued to speculate Elon musk will integrate crypto and more specifically Dogecoin to the Twitter platform. 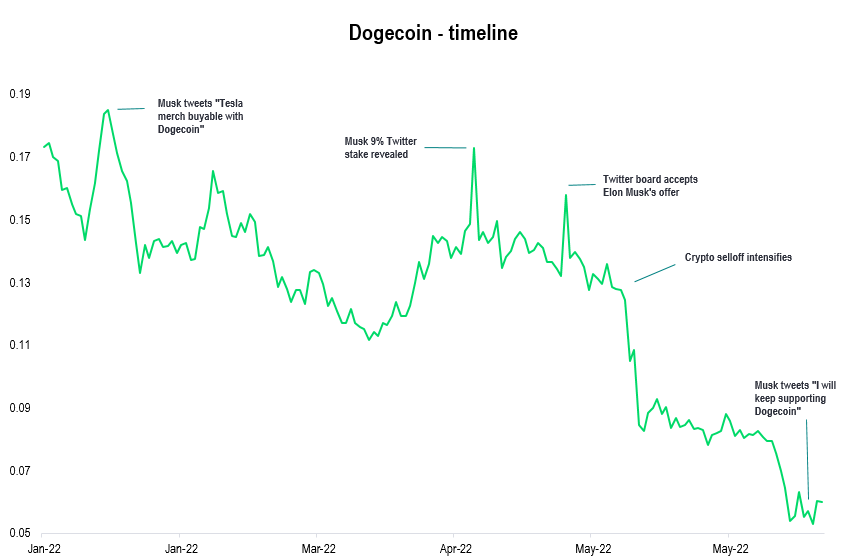 Could it harm Tesla shareholders?

Filings showed the billionaire businessman sold USD8.5 billion of Tesla stocks within 3 days after the Twitter board agreed to the deal. Tesla stock has slid a great deal since Musk’s average sell price of USD883 per share, in what seemed to be raising funds to purchase Twitter. Since then, investors have continued to worry the Tesla CEO will sell more shares to raise cash for the Twitter deal. Tesla shares have lost 46% since April 4th, the day Musk revealed his Twitter stake.

What is more worrying for Tesla shareholders is Musk’s obsession with Twitter and the distraction it creates from fixing some of the real problems and challenges at Tesla. He is also highly active on Twitter with a lot of back and forth with the Twitter team, as well as sharing memes, challenging politicians, and making jokes about his critics. In the meantime, Tesla shareholders are concerned that the time Musk will spend on efforts to lower the price of the deal and monetize Twitter will weigh on the performance of Tesla stock. 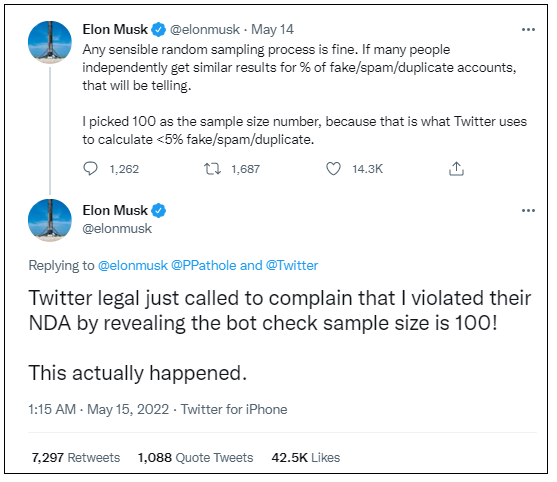 Asked about whether he will become the CEO of Twitter, he answered he doesn’t care about titles, suggesting he could perhaps manage or co-manage Twitter, on top of being CEO of both Tesla and SpaceX.

Just like many corporates, Tesla over-hired during the pandemic and the unravelling has begun with layoffs, something that is creating frustration as Musk communicates a mixed message with “dire” economic forecasts.

No doubt that fundamentals for Tesla are solid, with robust earnings and solid growth. However, it is navigating a storm with lockdowns in China, a decelerating economy that entails managing inventory and capacity to manage costs, an expansion with the Berlin and Austin factories, as well as plans to build a second Shanghai factory.

The picture is blurred for Tesla investors as Twitter retains much of Elon Musk’s focus. On the positive, in a scenario where Musk successfully completes the Twitter acquisition, puts a charismatic CEO in place, and keeps some distance from the social media, sentiment for Tesla should recover. In the meantime, the likelihood is increasing for the highly public billionaire to remain in the spotlight running both Tesla, SpaceX, and possibly Twitter at some point. With multiple factors at play influencing the growth of Tesla, Musk’s involvement in Twitter may prove to only be a distraction, but in the meantime, the effect it has on shareholders’ concerns seems serious.