Booming commodities, and upside potential for European energy majors suggest energy cyclical outperformance could continue into the next year.

The energy sector is dominated by a few well-known traditional energy companies also known as ‘’majors’’ with Exxon Mobil, and Chevron in the US and British Petroleum, Shell, and Total in Europe. An important sub-sector of energy called ‘’clean energy’’ is made up of those firms that develop solar, water, wind, and waste-based energy alternatives. Billion-dollar renewable companies include NextEra Energy, SolarEdge Tech, Clearway Energy, Plug Power and Brookfield.

There has been a growing divergence lately between ICLN (the iShares Global Clean Energy ETF) stumbling against the IXC (the iShares Global Energy ETF). The following graphic illustrates this divergence well, and on many occasions. Notice clean energy currently underperforming after a ramp up prior to Biden’s election saw ICLN hockey stick in September and October of 2020.

ICLN gains quickly faded after lots of pre-election rallying eventually converted into a more priced in sub-sector. Today, Biden’s policy remains favorable to clean energy stocks which is good for the sub-sector, but clean energy companies continue to trade at a 70% premium to traditional energy peers on EV/EBITDA terms. 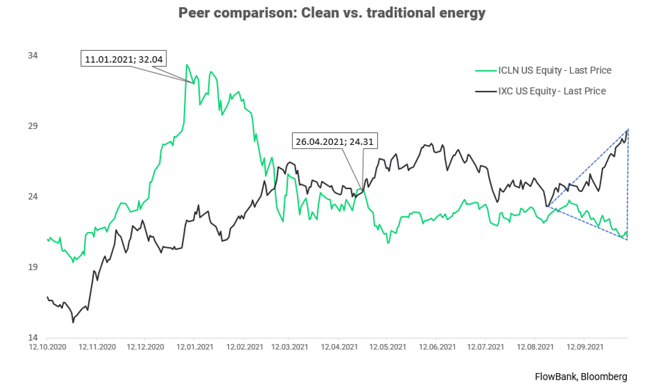 Traditional energy firms usually come at lower P/E ratios than clean energy counterparts, and they usually pay higher dividends. This is because they tend to be more mature, established, and profitable operations. Clean energy firms tend to have both the pro and con of being high growth companies which means reinvesting in the business rather than paying shareholders.

The commodities asset class is the best performing class this year. Investors haven’t seen commodities return as much since the early 2000s. We have witnessed how much metals and other materials have skyrocketed on the back of continued disruptions in supply chains and the result from a rapid rise in commodity prices has meant that energy costs have risen faster relative to materials. That is in turn more likely to shock stock prices via margin pressures in industrials and materials than in energy shares which is overall better for energy, but worse for the other two sectors.

Rising commodity prices have helped the energy sector outperformance and could continue on this path well into 2022. Usually, when metals see prices spring faster than energy costs, the material and industrial sectors tend to do well. We saw metal prices rising and we saw metals returns rising, too, but commodities on the whole rose more. This could in part be related to the recent economic slowdown seen in China and government efforts to cool down iron ore surges, putting downward pressure on metals.

Now, we see metals indices trailing energy gauges with materials underperforming energy, and falling 7.4% last month US markets. In Europe, the energy crisis has helped spur its Energy MSCI index in what has been dubbed a continuation of the energy cyclical trade. Despite a recent performance, the European energy sector might still be undervalued.

Because of the recent energy supply crisis notably present in Europe, we think it could be an interesting moment to explore some arguments in favor of rerating the European energy sector upwards. We chose to focus on Europe because in our opinion it could have a greater upside potential than US counterparts.

First, the MSCI EU Energy Index usually tracks Brent oil movements to the T, but currently this is not yet the case with oil running away. The index has yet to make an upward correction to catch up to oil prices, but a northbound correction could see the index pop thus justifying our view of an undervalued EU energy sector.

Secondly, we think demand for oil may remain strong in Q4, as the global economy continues to recover and reopen. In addition, we see evidence that OPEC+, and the US are both holding down supplies of oil, which could continue teasing a price rise thesis of Brent at $100.

Thirdly, fundamentals. The MSCI EU energy index’s blended forward EPS is estimated at 114%, according to Bloomberg estimates. This, contrasted with a relatively lower P/E ratio could signal more room to grow. Considering a higher EPS CAGR in Europe of 3.1% versus 2.9% in the US, and higher returns on equity by year end in Europe is also encouraging. Furthermore, European majors, when compared to US counterparts see a forward P/E ratio coming in at a discount suggesting a better value play. 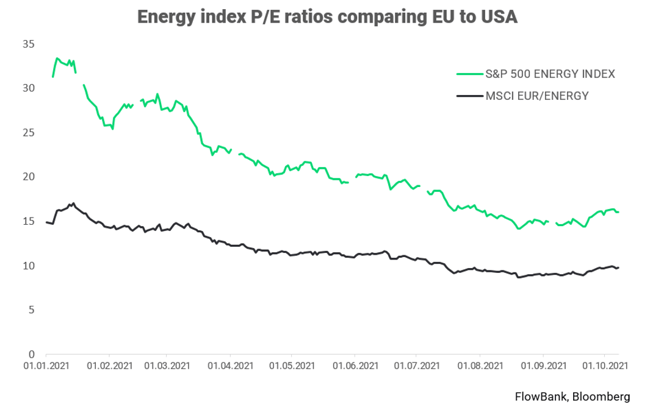 Yes, the energy transition is translating into a steady reduction in oil volumes, volumes estimated to 30% by 2030. However, European giant Total believes that lower oil volumes won’t necessarily equate to lower free-cash flows which is another reason to rerate the EU energy sector. Total expects to increase free cash flows via its LNG, electricity, and other renewable operations by $1.5B each, and also increase its cost savings by $1B. More than half of revenues are going to come from non-oil products in the next five years implying a convergence between clean energy and majors. This might sway investors to see a decent upside thesis for traditional European energy, if and only majors continue working closely with clean energy partners.