On September 15th, Ethereum transitioned from a Proof of Work (PoW) network to a Proof of Stake (PoS). This change to PoS means that consensus is now derived from a randomly selected group of validators instead of based on hash power from physical miners. In this report, we will focus on the rewards portion of the equation — where the rewards come from and estimate an annual percentage rate (APR) that stakers can expect.

With PoS, instead of competing and solving a mathematic puzzle, validators must acquire ETH and then lock their ETH away in a contract, otherwise known as staking. Among the stakers, the creator of the next block is randomly chosen with the chances of being chosen to increase based on how much ETH one has staked. Stakers who complete consensus tasks are rewarded with ETH but if a participant acts dishonestly or is offline for too long, a portion of their staked funds is slashed.

A validator can be rewarded for a couple of different consensus tasks. Every epoch (6.4 minutes) the Ethereum network evaluates a validator’s behaviour and assigns rewards (or punishments) accordingly.

Proposers are randomly selected validators that are rewarded for proposing the next block to the Ethereum network.

Attesters are validators who vote (attest) on the head of the chain as well as checkpoints (points at which transactions can not be removed from the chain). Every active validator will be selected to make exactly one attestation each epoch. This means that attestation rewards are the most frequent and therefore contribute the most towards validator yields.

Once every 256 epochs (27.3 hours), a validator may be chosen to participate in the sync committee where they continuously sign block headers for each new slot until a new sync committee is formed. Sync committee rewards are the least frequent and therefore contribute the least to validator yields. However, if chosen the rewards are relatively large during the ~27-hour period.
Since sync committees and proposing blocks are random there will be some variance related to those rewards. However, over the long term, we can expect a statistically constant trend. Below we show the expected proportion of rewards earned for each consensus task.

A validator can also be rewarded for a couple of different execution-related tasks each epoch. Unlike consensus rewards, execution rewards are much more variable and depend largely on demand for block space.

Tips are the fees paid by users (separate from gas fees) to incentivise validators to include their transaction(s) in the next block.

MEV is a term used to encapsulate the profit validator can make through the inclusion, exclusion and reordering of transactions in the blocks they create. Examples of this include front running, back running, arbitrage, liquidations and sandwich attacks

It should be noted that stakers can also receive additional rewards if they opt to stake with a liquid staking provider like Rocket Pool (token and commission rewards). It should also be noted that MEV rewards are only available to validators who run MEV boost which is an additional piece of software. Currently, 20% of validators are running the MEV boost software and this number is increasing over time.

Below we show a snapshot model of ETH staking yields in the current market environment. Issuance represents all consensus rewards while execution rewards are separately stated. 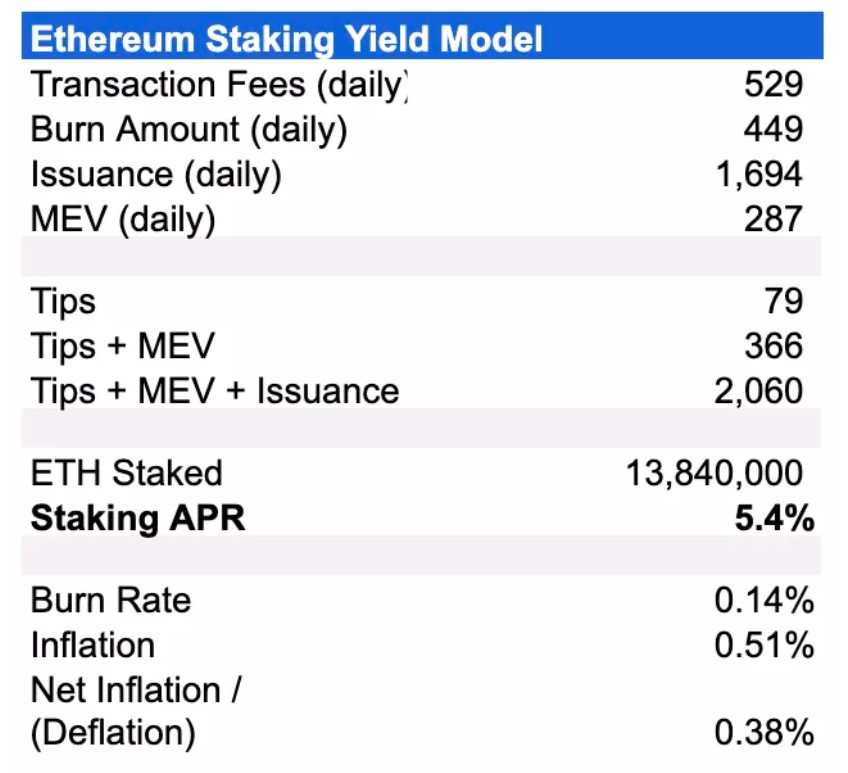 Execution rewards (tips + MEV) are directly proportional to the number of transactions on the network. The higher the demand for block space, the higher the tips will be while the opportunities for MEV increase as well. On the other hand, issuance rewards are inversely proportional to the amount of ETH staked, i.e., the more ETH staked the lower the pervalidator rewards become.

Currently, demand for block space is at historically low levels because of the high correlation to crypto prices. When prices are rising, users and speculators become more interested, and this translates to greater on-chain activity. Given the current macro and regulatory environment, risk-on assets like crypto are under more pressure. However, it is arguable that the removal of this speculative activity shows a clearer picture of the true, lasting demand for block space. Using the current demand levels as a baseline, below we estimate the staking APR over the next year.

Based on historic data, we estimate that ~140,000 more validators will join the network over the next year, and this will be the main determinant of yields. As shown below, Ethereum’s real yield (nominal staking yield less the inflation rate) is now among the highest of all leading smart contract platforms.

Not only will ETH yields be compared to other PoS blockchains, but the new yields will set a floor for lending rates among Decentralised Finance (DeFi) protocols. Lenders will be less incentivised to lend too far below the staking rate as lending can be a riskier endeavour. Similarly, if lending rates are lower, borrowers can take ETH loans and stake those funds, thereby capturing the difference. Withdrawals/unstacking is not yet enabled and is still 6 to 12 months out, so the lending arbitrage is not yet feasible. Furthermore, the addition of staking rewards has likened ETH to other yield-bearing financial instruments which may entice institutional investors or bring about new regulatory risks.

Staking yields for validators are predicted to decrease as more ETH is staked over time. Given the current muted levels of on-chain activity, issuance rewards are expected to contribute towards 1/6th of the total staking rewards unless demand picks back up. Validators will continue to join the network until the opportunity cost of capital becomes too high. The likely benchmark for this will be the FED funds rate which currently has an expected terminal rate of ~4.6% (early 2023). If demand picks back up, tips + MEV can materially improve these yields as the theoretical upside limit is in the high teens. Clearly, the introduction of yields to the world’s largest smart contract platform will have a material impact across multiple industries. 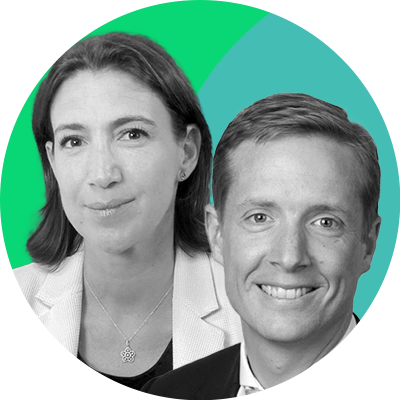