Short-term effect or not, a major software upgrade named "London" has given the cryptocurrency's price a boost.

The cryptocurrency Ether (ETH), native to the Ethereum blockchain, topped $2,800 last week, a price not seen since early June, when the cryptocurrency was still falling from its all-time high of $4,357 reached on May 12. In the last two weeks, Ether has risen by 60%. Year-to-date, Ether is up more than 280%, a clear outperformance of bitcoin (+40%).

The main reason behind this resumption of the uptrend: the August 5 implementation of a major "upgrade" to the Ethereum blockchain. But before explaining why a software upgrade can have such an impact on a cryptocurrency, let's take a look at the characteristics of Ethereum.

How does Ethereum work?

Ethereum has been distancing itself from Bitcoin for the past few years by presenting itself more as an exchange token rather than a safe haven. Moreover, although Bitcoin is the precursor of blockchain and cryptocurrencies, it suffers from certain shortcomings and imperfections on which cryptocurrency projects like Ethereum have built upon to offer, technically speaking, more mature and innovative projects.

A recent report from Messari shows that the daily settlement value of transactions operations on the Ethereum blockchain has surpassed that of Bitcoin.

Launched on July 30, 2015, Ethereum is a decentralized exchange protocol that allows users to set up smart contracts. These are pre-established contracts; applications that self-execute without the intervention of a third party to ensure authenticity. For example, with Ethereum you can establish a future contract whereby you decide to buy an asset only when certain conditions are met. Normally, this kind of contract requires the involvement of an intermediary (notary, etc.) and therefore costs. The Ethereum protocol allows the verification and enforcement of a mutual contract between parties on the blockchain. This protocol allows developers to create applications, store records and transfer funds according to past instructions, etc.

Since 2017, thousands of various companies (payment services, buying and selling, etc.) have developed their "smart contracts" and most often use the Ethereum protocol as well as ETH tokens as a means of settlement for these smart contracts.

A recent report from Messari shows that the daily settlement value of transactions operations on the Ethereum blockchain has surpassed that of Bitcoin (see chart below). 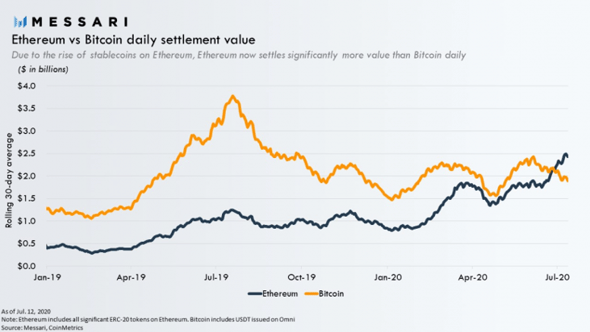 Growing interest in the Ethereum blockchain

One reason for Ethereum's growing success is its position as the blockchain of choice for many products and services that use DeFi - or decentralized finance - applications. DeFi refers to a category of new applications that aim to replace traditional financial products - such as lending and borrowing, trading, saving, derivatives and options - through the use of decentralized technology, rather than relying on a company or bank. These products are typically built on the Ethereum blockchain.

In fact, thousands of developers are building apps that recreate traditional financial products in a decentralized way on the Ethereum protocol, and as more and more users flock to interact with these apps, they need ETH to conduct their transactions. Today, the total value locked up in DeFi applications is exploding and has happily surpassed $100 billion. Applications developed on Ethereum now generate 3 times more revenue for this network than Bitcoin, even though Bitcoin has a market capitalization 2.5 times higher.

Many NFT projects such as CryptoPunks or Decentraland have their "smart contracts" on the Ethereum blockchain.

Another favourable development for the Ethereum protocol is the exponential growth of NFTs (Non-Fungible Tokens). Many NFT projects such as CryptoPunks or Decentraland have their "smart contracts" on the Ethereum blockchain. Moreover, there seems to be a growing institutional interest in the Ethereum public blockchain. Even though many states are still sceptical about crypto currencies at the moment, some forward-thinking governments have already entered the market with a preference for Ethereum. For example, Switzerland has allowed administrative tasks to be carried out via the Ethereum network in the canton of Zug.

The transition to Ethereum 2.0

The Ethereum blockchain incorporates several principles introduced by Bitcoin, including "mining." Contrary to the deflationary thinking behind Bitcoin's money creation, there is no limit to the amount of money that can be mined in Ethereum. But as with Bitcoin, the network is configured so that the difficulty of mining is constantly adjusted to the computing power of the mining community.

The growing success of Ethereum with the public has attracted an increasing number of new miners. The repercussion of this popularity is an increase in the difficulty of mining, which can eventually discourage independent miners for whom Ether will no longer be a profitable cryptocurrency. To avoid a surge in the difficulty of mining, updates can be planned. This was the case in 2018 with a new version of the software called Serenity. This new version - Ethereum 2.0 - is a multi-step process and creates a change in the mining process from Proof-of-Work to a Proof-of-Stake mining process.

The process towards Ethereum 2.0 is underway, with the "Berlin" stage taking place on April 15. These upgrades limit the power consumption of the Ethereum network, reduce fees and the amount of ETH miners receive, which de facto reduces the selling pressure of the ETH cryptocurrency.

But Ethereum has just taken a new step - "London" (EIP-1559) - which involves even more important changes around the economic logic of Ethereum. This update changes the way the gas fee (transaction fee) works, until now calculated according to the number of transactions on the blockchain.
It will now be calculated according to a different model: there will be a base fee, which users will be obliged to pay, and which will vary according to the congestion of the blockchain, but in a precise and predictable way. To this base fee may be added a kind of tip, which users will choose to pay or not depending on how fast they want their transaction processed. Some experts estimate that the price of transactions would decrease by 90%.

An amount of about 10'000 dollars of Ether is destroyed every minute since the implementation of the upgrade.

But the update named "London" will also introduce the practice of coin burn in the blockchain. Coin burning is the practice of deliberately destroying units of cryptocurrencies in order to increase their value. With the implementation of London, the "base fee" that users must pay is systematically destroyed. With each transaction on the blockchain, ETH are now burned. The process has already started since Decrypt estimates that about 10'000 dollars worth of Ether is destroyed every minute since the implementation of the "upgrade".

As a result, fewer ETH will be produced each year from now on - similar to the halving technique used by bitcoin - and this should play a large part in increasing the value of the cryptocurrency. Eventually, the reduction in supply could become greater than the inflation of ETH (i.e. the increase in supply). This is a fundamental change. Until now, the market has had the perception that Bitcoin's supply is limited in time, while Ethereum's supply is unlimited. But in the long run, Ethereum could even see its "net" supply fall (see chart below).

It's a very attractive equation for investors: the growing success of the Ethereum protocol will not only increase demand but also reduce supply - the perfect "scissor effect". A development that should encourage more investors to hodle ETH.

For many experts, Bitcoin should be seen as a digital storage asset (the equivalent of digital gold) while Ether is seen as Web 3.0. Ethereum now has 10 times more monthly active developers than Bitcoin. For Ethereum's supporters, its utility will eventually outweigh Bitcoin's.

Regardless, Ether's outperformance of Bitcoin over the past 12 months is remarkable. In fact, the Ether/Bitcoin ratio has reached a critical threshold as many investors are switching some of their crypto exposure from Bitcoin to Ether. The beginning of a long trend? 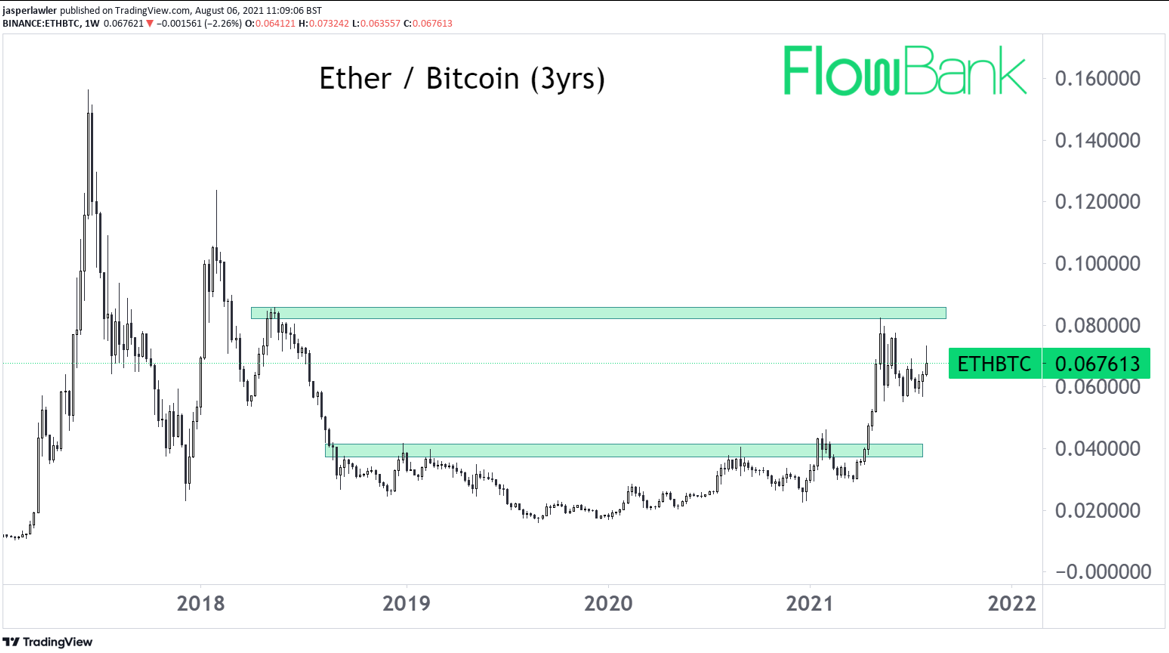