Unsurprisingly after such uncertainty in 2020, there is a wide dispersion of forecasts for 2021, from boom to bust. Jim Cramer and others expect a boom...

Jim Cramer, Ray Dalio and others have been referencing periods in history with similar characteristics to today and projecting out what could happen in 2021 and the coming decade.

As usual the consensus is somewhere in the middle, which often proves the correct version but at key turning points is typically very wrong. 2020 feels like a turning point. But is it the beginning of a new 20s-style economic and stock market boom like CNBC’s Jim Cramer and others are predicting?

The basic logic put forward by Jim Cramer of CNBC Mad Money fame – as well as others – is that in 2021, consumers will get the covid-19 vaccine and go wild, living life to the fullest – going to concerts, festivals, restaurants and on holidays. People have been restricted in such an unprecedented way- not seeing loved ones for months, borders, schools and workplaces being closed - with even the most basic means of socialising and entertainment like pubs and restaurants being closed. Once all these possibilities are available again - so the theory goes - the flood of spending will create a huge boost to the economy.

This is actually what happened in the 1920s because the roaring 20s followed the 1918 Spanish flu, which only properly ended in 1920. 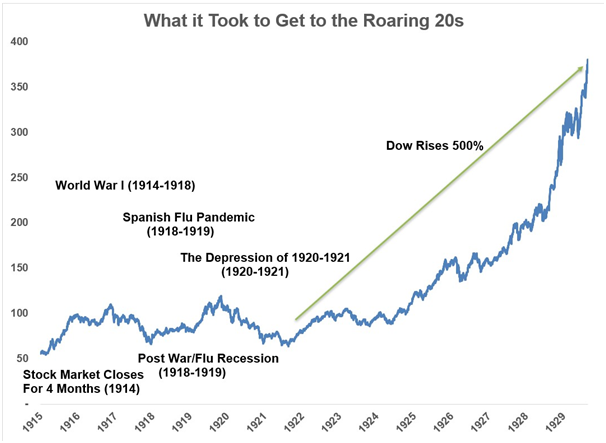 Spiros Malandrakis, head of research for alcoholic drinks at Euromonitor International described the setup for the roaring 20s as follows:

“In my mind, it’s not a coincidence sociologically that in the months and years that followed, we had years of cabaret culture in Berlin, one of the most hedonistic eras, the whole ‘Great Gatsby’ era. All around the planet, people woke up, got out of bunkers, and had the best time of their lives for 10 years.”

“During epidemics you get increases in religiosity, people become more abstentious, they save money, they get risk averse and we’re seeing all of that now, just as we have for hundreds of years during epidemics,” Christakis told The Guardian. However, post-pandemic “all of those will be reversed.”

The idea of the roaring 20s style boom centres a lot around travel and leisure and pent up demand from 2020 lockdown. Naturally, as far as stock market investments – this makes travel and leisure stocks of particular interest going into the next year.

Added to this possible change in philosophy at the individual level-post pandemic, the initial policy response from governments suggests monetary and fiscal rules have fundamentally changed.

What has been unique to this crisis is that governments adding to national debt has coincided with the cost of servicing those debts fall, largely because of investor demand for yield and because of central bank bond purchases. The same can be said at the consumer level, where the consumer’s debt service ratio has fallen to an all-time low. 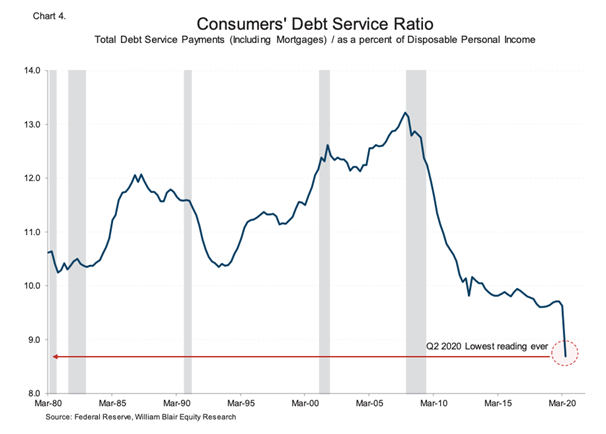 Were normal market forces to operate, higher debt issuance raises the risk of default and increases inflation expectations, forcing interest rates higher. But with such strong demand for bonds, there is now arguably less need for governments (or consumers) to reign in the debt after the crisis by raising taxes and cutting spending.

There also appears to be an understanding now that with interest rates pressed to the floor, fiscal policy is the only tool to try to reset the economic cycle.

How today is different to the 20s

We have just outlined some similarities between the Spanish flu and 1920s with covid-19 and the outlook for 2021 and beyond. But of course there are some distinct differences – which could outweigh the similarities. The behaviour of people, authorities, demographics, taxes, debt levels and the overall state of the economy were different on a number of levels.

Probably the first thing to point out is that most economic historians say the recession of 1920 had less to do with the 1918 flu than the shift from war to peacetime economies after WWI.

The 1920s predates the welfare state so the government did not heavily intervene, nor did the recently created Federal Reserve. Without government support, the pent up demand was stronger following the recession. The lack of government intervention also meant Government debt-to-GDP was 10 per cent – not more than 100 per cent. That better public sector balance sheet allowed the federal government to cut taxes through the 1920s, while many are predicting governments will raise taxes after 2021 to pay for the stimulus programs of 2020. Total debt was also in far better shape to setup a boom. The demographics of western nations is also very different now to the 1920s, especially in America. The share of the population over the age of 65 was 7 per cent in the 1920s; today that share is on the verge of hitting 20 per cent for the first time. In the 1920s, over half the population was under 30 and ready to spend, not save like the older generation.

Stock market valuations have a very different starting point in 2020 to 1920. The cyclically adjusted P/E was around 6x, not over 30x. 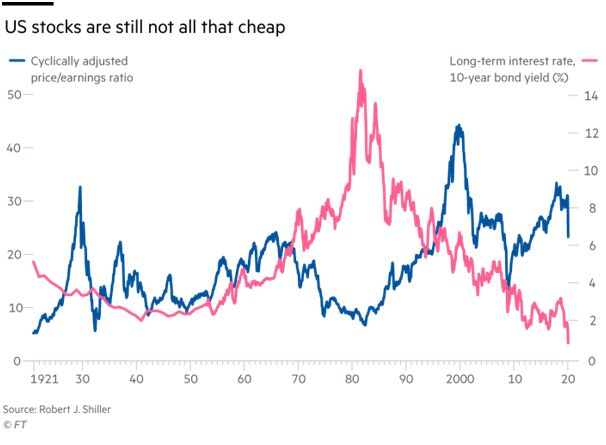 However, one point to make is that all new bull markets start with record highs in the stock market, this is as true in 1920 as in any other instance- and could well be true of 2021.