A preview of the news, earnings, and economic data to expect in the week ahead. This week includes the Fed meeting and Swiss National Bank rate decision as well as an election in Canada and earnings from Nike, Oracle, and Adobe.

What happened this week 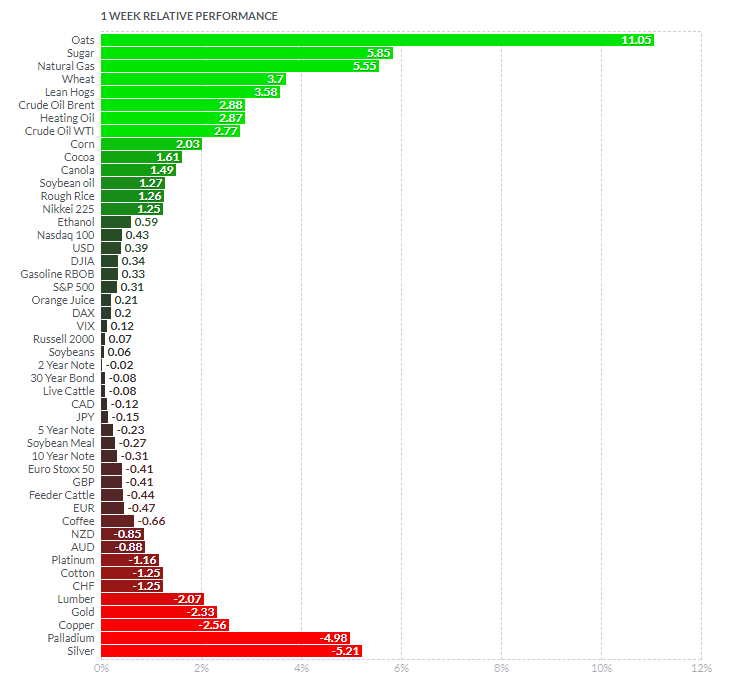 US Stock markets nudged lower all week with the DAX and Nikkei outperforming with modest gains. Mixed economic data including softer inflation, but higher retail sales saw the US dollar rise. Oil prices broke out with WTI closing over $70 for the first time since early August. It was a rough week for metals where slowdown fears around China drove down industrial metals while Fed tapering bets pushed down gold and silver.

A risk-off tone in markets over the last week could have something to do with this Fed meeting and any upcoming announcement on tapering. Casting our minds back to Jackson Hole Fed Chair Jerome Powell said most members expected to begin tapering this year - so that leaves three more Fed meetings including this one. However, consensus among economists is that the specifics on tapering don’t come until the November meeting. The big miss on the August non-farm payrolls was probably enough to dissuade any Fed members from pushing for an earlier announcement.

Announcing tapering this week would be a hawkish surprise and likely dollar-bullish and could exacerbate the pullback in stock markets.

As a Swiss bank we must mention this one, but realistically it is very unlikely to create many fireworks in markets. The mantra for Swiss monetary policy over the past few years has been to track the ECB in order keep the EUR/CHF competitive for Swiss exporters. For the same reasons, SNB policy has been directed towards direct currency intervention rather than QE / interest rates of late.

The election is on Sunday September 26 so the result won’t be known until the following week trading in German markets especially will be in anticipation of the results. The end of the 16-year Merkel-era is upon us. The most likely result is a continuation of the CDU / SDP coalition government with an outside chance that the Greens are involved too. The difference this time is that the SDP might lead the coalition rather than Merkel’s CDU.

The result of the election probably matters less than Merkel’s departure. Investors have had months to get used to that idea and might be ready to buy into the 'new era' once election uncertainty has passed.

The Canadian election takes place on Monday September 20. It’s a lot more straightforward north of the American border so results should be confirmed by Tuesday. Prime Minister Justin Trudeau is hoping to ride the coat-tails of a successful vaccine rollout to election victory. Because of the three party system involving two left-leaning parties and one right leaning- his chances are good. But even if it backfires and Trudeau is out, the Conservatives led by Erin O’Tool have comparable economic plans.

If there is any kneejerk reaction to a shock-Trudeau loss, it can probably be faded by traders given the minimal short-term impact of the result.

This item probably deserves to be in every week ahead because the economic and market risks surrounding China seem to be growing. The centre of the storm is Evergrande property group, which looks close to failure with potentially huge repressions given its $300 billion in debt.