On a day when crypto markets were in freefall and the ECB was warning of ‘exuberance’, a third chink in the market’s armour appeared. Talk of the Fed Tapering QE in the FOMC minutes.

Reminder: What is tapering?

Tapering is the word that’s been assigned to a central bank reducing the value of the bonds it is purchasing. A taper tantrum is if markets don't like it.

The process of the Fed buying bonds with new money it just created out of thin air is called quantitative easing. The stated purpose of QE is to add monetary stimulus to an economy in trouble and tapering the QE is done when the economy is getting back on track. The Fed is currently buying $120M worth of assets each month and the program is opened-ended ie there is no ceiling to how much in total it can buy.

What the FOMC Minutes said

Minutes from Federal Reserve policy meetings tend to be viewed as ‘stale’ because they are released two weeks after the meeting took place, by which time things have often moved on, making the comments out of date. (More of that in a minute.)

The comments within the minutes that stoked the reaction in FX markets were the following:

A number of participants suggested that if the economy continued to make rapid progress toward the Committee's goals, it might be appropriate at some point in upcoming meetings to begin discussing a plan for adjusting the pace of asset purchases.

Translating that back into real English we can glean that underneath the surface, the Fed is getting nervous about inflation and if it continues to go up, they will reel in the stimulus.

How did forex markets react?

The hawkish tilt to the minutes was not expected so naturally the reaction was a bullish US dollar one. The reason for the fairly limited reaction so far is in part because the dollar has been in a downtrend for the best part of 2 months so traders bought the dip. This is evident below in the EUR/USD chart. 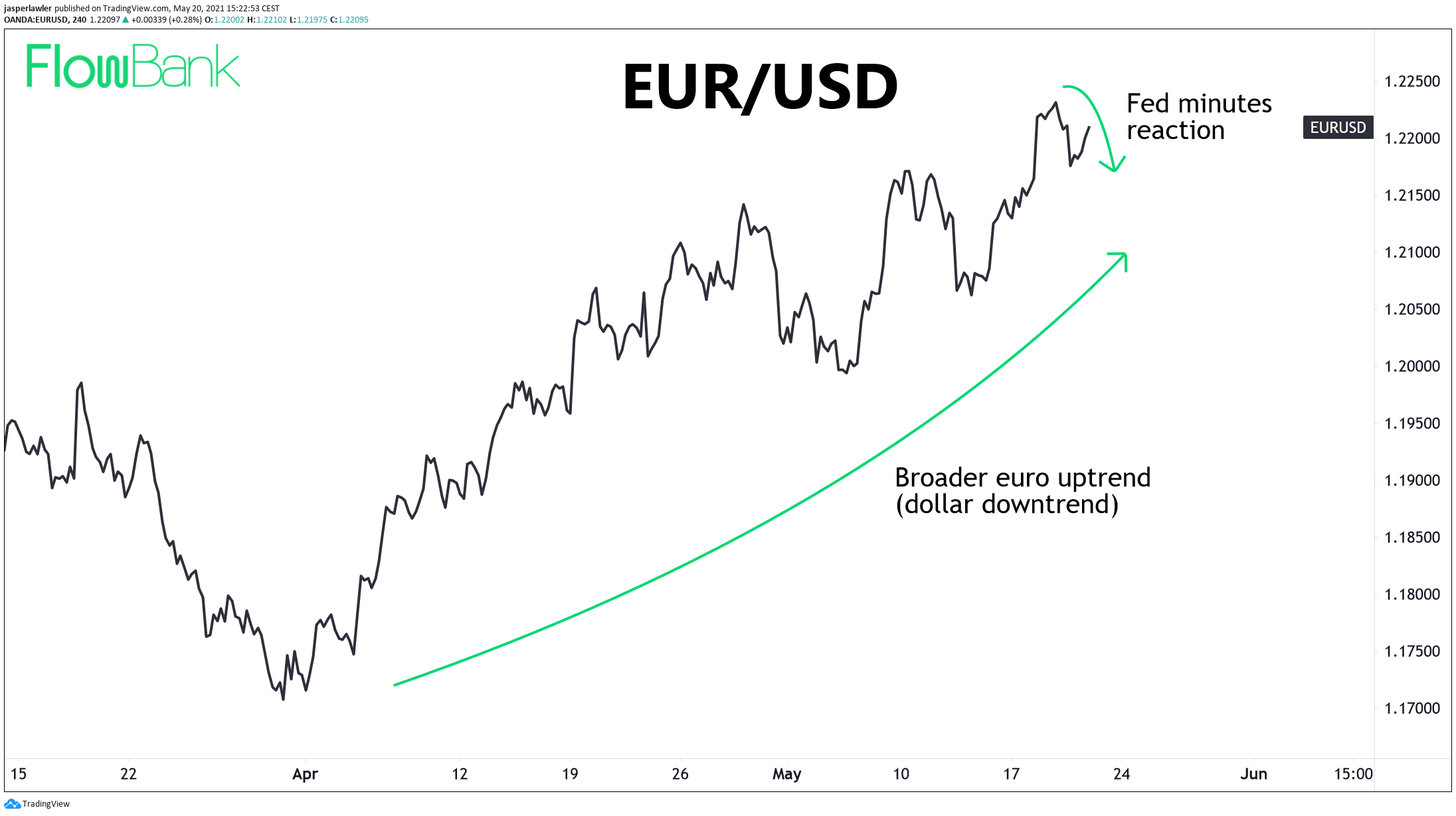 EUR/USD dipped about 0.5% on the day, snapping a 4-day winning streak. The daily trading range was approximately 80 pips. The reaction was dollar-positive but there was not any sense of panic.

What do the minutes mean for USD?

Fed Chair Jerome Powell infamously said in June 2020, relatively early into the Fed’s policy epic new stimulus that he was “not even thinking about thinking about” raising interest rates.

That may be true still but we know now that some Fed policymakers are thinking about thinking about tapering QE. And so, they should be. The US economy is roaring back as vaccines rollout and states reopen, and even if there is a bumpy road ahead, the economy is no longer in an emergency that requires emergency stimulus.

BUT as we noted before, the minutes are 2 weeks old – they are stale!

Almost every single Fed policymaker has said, since the last Fed meeting, that they think inflation is ‘transitory’ and that there is no need to over-react. They have all been singing from the same hymn sheet – the one exception is the Dallas Fed’s Robert Kaplan (somebody to pay increasing attention to perhaps).

What’s the next trend in forex?

For now, the trend remains bearish USD which of course means positive EUR, GBP. JPY etc – the dollar bounce after the Fed minutes is so far just a very noteworthy blip.

It is the dovish rhetoric from the Fed that best explains the turnaround in the US dollar over the past two months after a strong first quarter. There are of course other factors like the USD as a haven asset and the progress of the global recovery but the Fed is paramount. The uptrend in EUR/USD was crystalised when US CPI inflation came in hot but the Fed dismissed it as transitory.

What we might conclude from these minutes is that the Fed has subtly switched from auto-pilot to data-watching.

The real turning point, and potentially even a new taper tantrum in markets will be if inflation data (like next week’s core PCE) continues to move north, but this time instead of dismissing it – the Fed actually talks about tapering.

The more signs of inflation we see in the upcoming data, the greater the chance of the full taper happening at or before the Jackson Hole summit in August.