Sales in the video gaming industry are tipped to grow by 50% in the next 5 years, with most of the growth coming from social & casual gaming. What could be the top trading opportunities to take advantage of gaming’s bright future?

The video gaming industry is certainly not shielded from a more hesitant consumer to spend given the surge in food and energy costs, but it could still offer bright spots for in-app gaming purchases as those tend to be small. More than that, the jump in time spent on our smartphones is boosting spending on mobile games.

Where is the video gaming industry headed?

The gaming industry is witnessing softer growth this year, after robust growth of more than 30% from 2019 to 2021, supported by the global pandemic that forced many to stay at home. Futures growth estimates vary to a large extent. While some analysts forecast sales to drop (∼1%) this year for the first time since 2015, others see growth to continue in the high single digits for years to come. 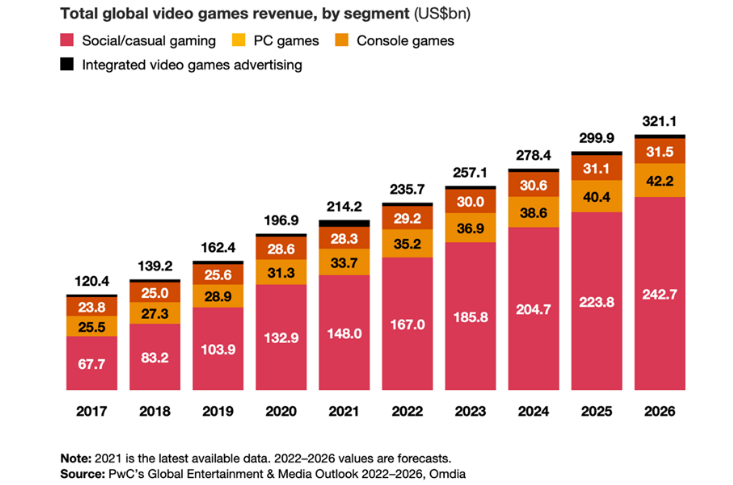 The growth is particularly robust for mobile-based games as smartphones continue to play a significant role in our lives. Activision Blizzard, the largest video-gaming company, revealed it earned more on mobile games last quarter than PC and consoles combined.

Activision: trading at an 18% discount to takeover deal

Shares of Activision Blizzard (ticker: ATVI), the largest gaming company by market value, surged more than 30% back in January when Microsoft offered to buy it for USD95 per share. Since then, the stock has hovered between USD74 and USD82, as investors attempt to guess the probability the deal will go through.

It is uncertain if the deal will close as there could be a long journey ahead to convince regulators. Last week, the UK’s Competition and Markets Authority (CMA) expressed concerns about the deal, signalling it will likely proceed with a more in-depth review.

While it may make investors shy away from the deal, some see it as an arbitrage opportunity, keeping in mind that the same attractive business prospects that have made Microsoft pay the high premium for the deal, could also attract other potential buyers if the deal falls through.

Warren Buffet’s conglomerate Berkshire Hathaway has been buying Activision shares actively since the start of the year, now owning a 9.5% stake, valued at approximately USD5.7 billion. In other words, Berkshire could well be interested to keep its investments in Activision, as the leader in mobile gaming, even if the deal falls through.

American video game company Take-Two Interactive Software (ticker: TTWO), popular for its video games Grand Theft Auto and NBA 2K, has seen its stock correct by more than 40% from its highs, yet its fundamentals remain robust.

Its recent acquisition of well-established mobile gaming company Zynga is also expected to boost growth. As one of the fastest-growing gaming companies, Take-Two also has the potential to expand its margins and its IP. In fact, TTWO has expanded its net margins from 25.8% in 2017 to almost 65% currently. Nonetheless, with no major releases announced yet, investors will need to be patient to see potentially exciting releases in 2023 and beyond.

Since China’s regulatory clampdown and additional regulations, gaming giants have seen their margins decrease and growth decelerate significantly. So much so that China’s central bank recently cut interest rates to try to stimulate its economy. Having said that, the local video gaming industry is still projected to grow at a compounded annual growth rate of 7.3% through 2027, for a projected market value of USD80bn.

Yet, the most positive in the story is that Chinese tech stocks, which were once red hot are now largely selling at a discount as investor appetite has decreased due to the quantitative tightening of central banks around the world. The mood is also cautious because of China’s history of clamping down on various industries in the last few years.

Tech conglomerate and owner of WeChat, Tencent (ticker: TCEHY) has stakes in several developers such as Riot Games (League of Legends), Sumo Digital, Turtle Rock, and Epic Games (40% stake, Fortnite). Tencent has seen its revenue growth slow to 8% YoY and profit fall 25%, affected by a slowdown in gaming revenue growth and a fall in advertising. The shares are down 38% from a year ago, trading back to pre-pandemic levels. But, the tech giant has demonstrated resilience and the ability to rebound from stepbacks. Recently, it is reportedly pouring resources into the hot short-video trend to compete with ByteDance’s Douyin, the owner of TikTok.

Netease (ticker: NTES), another leading Chinese gaming company is more of a pure play, spanning a portfolio of PC and mobile games as well as e-commerce platforms in China. Its stock is down just 7.5% from a year ago and demands a market cap of around USD58 billion. In its last earnings report, it reported better-than-expected earnings with a margin improvement in gaming and revenue grew 12.8% YoY.

The gaming industry may be poised to offer attractive investment opportunities for the coming years. Yet, the challenge will be to identify the growth stories and those companies that could benefit from PE multiple expansion, i.e. companies most poised to increase profit margins and growth. Alternative bets are arbitrage opportunities for M&A deals, but investors must be willing to hold the names long-term if the deal falls through.