Curing cancer might become possible, thanks to genomics medicine. In a recent communication, renowned investor Cathie Wood stated that genomics will be one of the most disruptive technologies in the world. But what are genomics and how can an investor play this trend?

I am no scientist: what is genomics?

Genomics is the study of this full genetic complement of the organism called the genome. The genome is the organism’s complete set of genetic instructions. Our body is composed of trillions of cells, with each of them enclosing the complete set of instructions to make our organism, almost like a recipe book. The genome is made of Deoxyribonucleic Acid (DNA), which holds the chemical code to guide our growth development and health.

Single strands of DNA are called chromosomes, and within these chromosomes, sections of our DNA can be read together to forms genes. These genes are what determine our body characteristics, such as height, eye colour, and… our health.

So, what if we could start playing with these and enhance ourselves not to be sick or disabled? That would be great right? I mean, it is great, because the good news is we can.

Latest developments in genomics science and bold statements for the future

The Human Genome Project, launched 30 years ago, had the mission to generate the first map and sequence of the human genome, and succeeded in 2003. What is more, the cost of DNA sequencing has been reduced by a millionfold, meaning an explosion of discoveries and advances in the domain. Today, numerous genomic applications have become common practice, such as prenatal genetic testing, ancestry checking, genetic disease diagnostics, etc.

And the vision for the next phase of human genomics is bolder than ever. The Human Genome Project has made a list of 10 bold predictions for 2030, which highlights the mad advances we have completed so far and gives us a hint of what is coming. Overpromising? Maybe, but remember that we seem to be on the verge of a technological explosion: 90% of all the scientists since the 1900s are alive today. Humanity has never had so many brains devoted to science. Let us have a look at the list:

The most fascinating predictions is undoubtedly the last one: genomic medicine could revolutionize world health. What if genetic disorders like Down syndrome, Haemophilia, or cancer were only coding errors which we could fix?

“DNA sequencing is going to introduce science into healthcare decision making for the first time,” said Wood. “We can honestly say that until now more than half of all healthcare decisions were in some part made through guesses or experiences. Now we’re going to have the data.” Cathie Wood is confident that we are going to be able to cure diseases we would have never thought possible, such as cancer.

Ark Invest also proposes a genomics-focused ETF, with big bets on stocks like Exact Sciences, which makes up 5% of the fund’s composition. 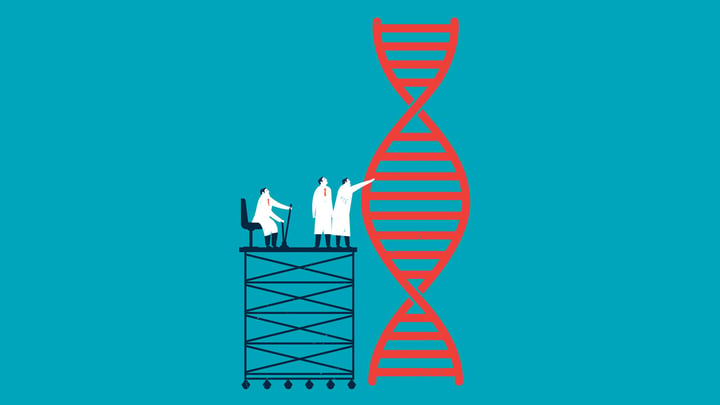 How can one invest in genomics?

One of the trendiest ways of investing in genomics has been, as mentioned previously, the ARKG fund, which has seen impressive inflows in the last few years, but there are also other ETFs to choose from:

For investors who want to aim for specific stocks, here are the companies which are the most heavily involved with the genomic technology among which:

There are plenty of other stocks which participate in the genomics revolutions, such as:

7 great books every investor should read

Covid is a chance for pharma to gain our confidence back