For the first time since Angela Merkel took office 16 years ago, this German election could mean big changes in Germany. What could that mean for international investors?

On Sunday September 26, Germany holds a defining national election that will usher in a new era without Angela Merkel.

For any near-term causes of market volatility, we should know who the new German Chancellor is by Monday, but unless there is an outright right or left-wing majority, government coalition talks could take weeks.

Why does it matter?

How does the German election work?

The Federal Republic of Germany has a plural multi-party system. There are numerous political parties, and all have bite at the cherry. Any party that receives more than 5% of the popular vote gets a representation in the Bundestag (the German parliament) equivalent to their vote share.

Who are the German political parties (& what are their policies?)

There are five parties that stand a chance of forming part of the ruling coalition.

Who will win the election?

For the last year the result was on autopilot with most forecasters expecting a continuation of the status quo with a CDU-minority government (only with Merkel out of the picture). However a disastrous campaign from the CDU/CSU partnership and their new leader Laschet means the SPD and their leader Scholz are polling as favourites. 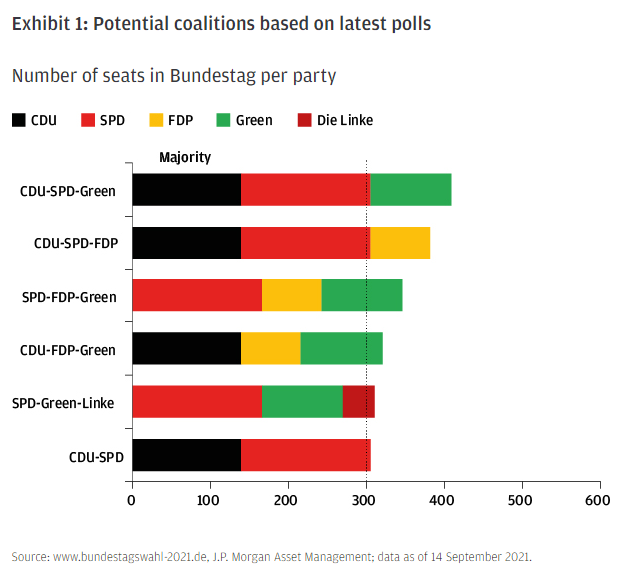 Macro: What will happen to the DAX 40 index?

Positive A: The surprise continuation of the CDU/SDP. German stocks have outperformed with this combination and long term investors value certainty and this result is not expected.

Positive B The expected 3-party split of conservatives, social democrats & greens. The expected result shouldn’t provide much volatility since the nature of a 3-way split will dim the scope for any one party to make meaningful changes. However, the prospect of higher fiscal spending and the removal of election uncertainty is probably a net-positive in this scenario.

Negative A: A shock inclusion of the ‘hard left’ Die Linke in a coalition with the SDP & Greens. This could leave investors worried about an anti-business climate.

Negative B: A coalition involving the CDU/CSU and the FDP could be viewed as ‘too conservative’ meaning a policy of austerity would be more likely and reduce the chance of continuing the EU Recovery Fund. 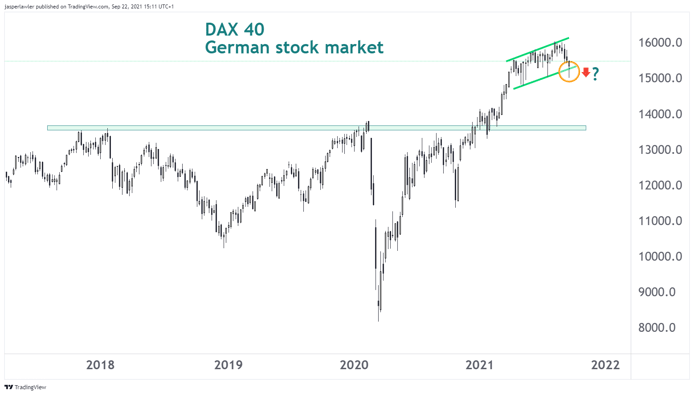 German stocks have been on a positive trajectory since breaking out above long term resistance around 13,500 to a record high this year. A breakdown from the current rising channel would risk a deeper correction back towards 13,500.

Read our blog: What is the DAX 40? to learn more about trading this stock index.

NOTE: Should Olaf Shultz become Chancellor, that might imply more fiscal leniency towards the European Union, which could give a lift to peripheral European indices including Italy’s FTSE MIB and Spain’s IBEX.

Micro: Which stocks will benefit from the German election?

The current perception is that Germany’s auto companies are through their Dieselgate-worst and set to benefit from higher EV adoption. Government investment and subsidies to green causes helps this but if the balance is wrong could hinder current production with extra red tape. Consider:

Could benefit from renewable energy push by coalition with greens, or lose out if greens not involved. Consider:

Could benefit from increased infrastructure spending on digitising public transport and internet services in a left-leaning coalition. Consider:

Download the FlowBank investing app to access all the blue chip and midcap German stocks as well as major German and European stock indices.