2021 has been dubbed the reopening reflation year, and as such cyclical stocks have mostly outperformed big tech. Will a Global Minimum tax put a top in FAANG?

What is happening with a global tax?

The G7 group of nations are banding together around US Treasury Secretary Janet Yellen's proposal to ensure companies pay taxes where they operate and to have a global minimum corporation tax. The number put forward so far is 15%.

When us Europeans are used to seeing up to half our earnings disappear from our pay checks, 15% might not sound like a lot – but there are some things to consider:

Why set a global minimum tax?

US Treasury Secretary Janet Yellen described a “race to the bottom” in attempts by big corporations to legally avoid taxes.

Naturally as the corporate world searched around for the best tax bargains, some countries – notably Ireland and the Netherlands lowered their corporate tax rates significantly and reportedly cut so-called ‘sweetheart tax deals’ for the biggest companies. Having a global minimum tax is intended to dissuade this kind of behaviour from corporations and countries.

How will stocks be affected by a global minimum tax?

Big tech companies as well as healthcare companies are at the tip of the spear in tax avoidance – and naturally could be hardest hit were a deal to get done.

Stock prices are (supposed to be) based on a discounted forward earnings model. Higher taxes mean lower earnings which means a lower share price. So that’s obviously bad for big tech investors and owners of FAANG stocks – Facebook, Apple, Amazon and Google (Alphabet).

1)      It would not make much difference anyway

We probably need to accept that were this deal agreed at the G7 to be implemented, tech companies would pay a higher tax rate than they do now. But, it’s not likely to be by much. Goldman Sachs has calculated that it would only represent a 1-2% downside to consensus 2022 earnings per share estimates on average. For low-taxed industries like technology and healthcare, it could be more like 5% downside.

Still, if you are investing in growth and these companies have been reporting double digit sales growth for years, it probably does not damage the investment case.

Part of the motivation for the US making the proposal was to dissuade other countries, mostly the UK and Europe from instituting a ‘digital tax’ aimed at big Tech companies. The below chart shows what some of the biggest American companies paid in UK tax as a percentage of turnover. 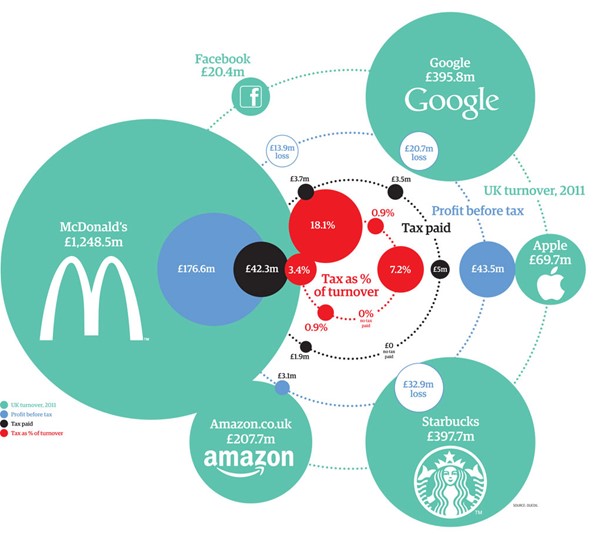 The idea of tying taxes to sales rather than profit is something Big Tech and other big corporations will have wanted to avoid at all cost. Amazon especially is known for having made billions in revenues but having razor thin operating margins because all the money is ploughed back into the company. Even this tax deal in theory wouldn’t affect Amazon because it is aimed at companies with a 10% profit margin, Amazon’s was 7.9% in 2020. Though officials have said Amazon would be affected by whatever is agreed.

The high sales / low profit model has been good for Jeff Bezos, Mark Zuckerburg and the other billionaire tech founders as well as shareholders because instead of the profits being taxed as dividends, the firms focus on growing sales, which attracts growth investors, pushing share prices up and boosting their wealth anyway.

These are ‘proposals’ by the G7, which as a group has influence but no actual taxation authority. The clearest example is the United States, where a 50/50 split in the US Congress means Republicans, who favour lower tax rates in general, could kill the deal.

Even if the assumption is made that eventually these proposals make it into law, it will need to be ratified and implemented with domestic tax policy across the 140 countries that will be negotiating in talks led by the OEC. That process could go well beyond short-term investment horizons of the next 12-24 months.