An exponential curve for the Fed's balance sheet?

A massive increase of US debt issuance suggests the Federal Reserve's balance sheet could grow by 400% by 2050.

Investors riveted by the famous "tapering”

The publication of the minutes of the last Fed meeting was the most anticipated event of the week for markets. Indeed, Jerome Powell and his committee surprised the experts last month by calling the price increase we witnessed in the past months "transitory". In other words, despite a strong economic recovery in the US and an inflationary surge (+4.2% in April), there is no question of the Fed slowing down the asset purchase program ("Quantitative Easing" or "QE"). However, other central banks have started to implement tapering. This is the case, for example, for the Central Bank of Canada and the Bank of England.

The Fed's stubbornness in not adjusting its policy is generating some concern for markets. For many analysts, Jerome Powell is making a monetary policy mistake, which would force the Fed to resort to a brutal adjustment if this inflation is not "transitory". In this context, the minutes of the meeting could have been very instructive.

A quick look at the twin US deficits shows the danger that that a rise in bond yields would pose for the US economy.

However, in the end we did not learn much from the minutes. The Fed reiterated its dual objective of inflation control and job creation. The only thing that is new is that if economic growth accelerates, the question of a possible reduction of QE will arise. A slight shiver ran down Wall Street's spine. In view of the Fed's imminent tapering, isn't it time to reduce exposure to the risky assets that have benefited so much from the Fed's generosity in recent months?

This anxiety was short-lived, as many investors realized that this famous "tapering" may not be so imminent as the Fed has very little room to maneuver.

Indeed, the Biden administration's stimulus plan amounts to several trillion dollars financed by debt. This debt is "monetized" by the Federal Reserve. Without the Fed buying this debt, U.S. bond yields could rise sharply, with consequences for business and household borrowing costs. A quick look at the US twin deficits (see chart below – source: Crescat Capital) shows the danger that a rise in bond yields would pose to the US economy. The expansion of the Fed's balance sheet and the $120 billion in monthly redemptions therefore allow the Treasury to continue to finance its huge debt at low cost.

But this money printing at a time when the economy is on the verge of going full speed ahead could indeed generate inflation – and therefore tensions on the long end of the curve.

Thus, the Fed is maintaining its bond-buying program to keep yields as low as possible. At the risk of creating even more inflation and new financial bubbles. 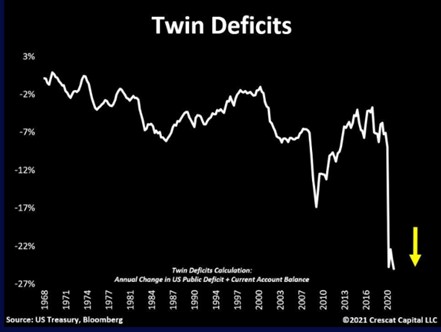 In short, the Fed seems to have locked itself into a vicious circle from which it is difficult to see how it can escape without creating severe turbulences in financial markets and the real economy.

For some, even if "tapering" could be implemented sporadically, the Fed will have no choice but to continue on its dangerous path.

An explosion of US debt...and the Fed's balance sheet by 2050

This is indeed the scenario mentioned by some economists but also by Jim Reid (DB) recently. As a reminder, the CBO (Congressional Budget Office) has just published its new projections concerning the federal debt; by 2050, this debt could become abysmal, reaching $140 trillion or 200% of the US GDP. An unrealistic scenario? Not necessarily, since Japan has already exceeded this level of debt as a percentage of its GDP (250%).

Is this scenario plausible? Yes, if we consider that these debt projections come from a very serious organization (the CBO) and that over the last 20 years, the Fed's balance sheet has grown by 1,000%.

What is the investment strategy in such a scenario?

Such an expansion of the Fed's balance sheet would result in a massive injection of liquidity into the global economy. Indeed, the other major central banks (ECB, Bank of Japan, SNB, etc.) would have no choice but to follow the Fed's lead and thus increase the size of their balance sheets or risk a massive appreciation of their respective currencies. Applying the same rate of increase, DB's strategist has calculated an increase in central bank liquidity of $100 trillion by 2050.

What could be the consequences for financial assets? When the Fed introduced the first QE in 2008, many economists expected inflation to explode. The idea was to shift portfolio allocations to assets that were positively correlated to inflation.

Fiscal austerity policies have probably contributed to the sluggish price growth in the years 2010-2020. The pandemic seems to have reversed this trend.

As we have learned over the past decade, the opposite scenario has played out. Although other factors must be considered, the massive expansion of central bank balance sheets has proven to be deflationary and has generated real economic growth well below historical averages. As a result, a portfolio invested in so-called "deflationary" assets (treasury bonds, technology stocks, etc.) has strongly outperformed a portfolio invested in "inflationary" assets (commodities, value, and European stocks). As shown in the chart below (source: Bank of America), this outperformance has been going on for many years: 1 dollar invested in 1974 in the "deflationary" portfolio would be worth 104 dollars while the "inflationary" portfolio would be worth "only" 38 dollars. This performance dichotomy has accelerated since 2008 and can be explained by the fact that the injection of liquidity and zero (or even negative) interest rates have benefited "paper" assets more than real assets.

Bis repetita for the decades to come? Nothing is less certain. Indeed, certain developments suggest a different scenario.

For example, fiscal austerity policies probably contributed to the sluggish growth of the years 2010-2020. The pandemic seems to have reversed this trend, with the largest peacetime fiscal stimulus program ever seen.

Another paradigm shift is Asia. While China and its neighbors have exported their low wages over the past few decades, rising wealth and aging populations are affecting Asia's balance of trade, but also the appreciation of their currencies and thus the inflation exported to G7 countries.

These elements suggest that a basket of so-called "inflationary" assets could potentially generate more attractive relative returns than they have in recent years. The strong outperformance of commodities relative to technology stocks in recent months is a first indication of possible asset rotation in portfolios.

It may also be necessary to consider instruments that protect portfolios against the risks of competitive devaluations of so-called fiat currencies. For some, precious metals such as gold and silver are the best protection. For others, "digital" gold (Bitcoin) could also be useful in such a scenario. 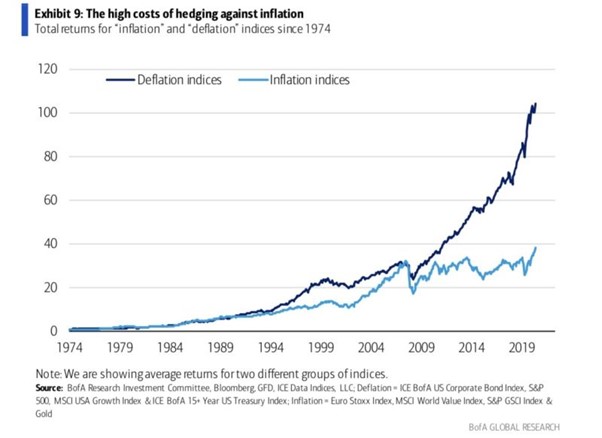