How China could make or break the commodity supercycle

China could be the leading force in a commodity supercycle, if it choses policies that favor commodity sectors.

In the 1990s, the rise of the "New Economy" was thought to mark the end of commodity dependency. The S&P GSCI Commodity Index experienced a spectacular bear market that began after the first Gulf War, but the bursting of the technology bubble in 2000 put an end to the bear cycle. A bullish super-cycle for commodities then began. The financial crisis of 2008 marked a new trend reversal leading to a long period of underperformance of commodities. At the end of 2020, commodities reached a new low relative to equities.

Figure 1. relative performance of the S&P GSCI vs S&P 500 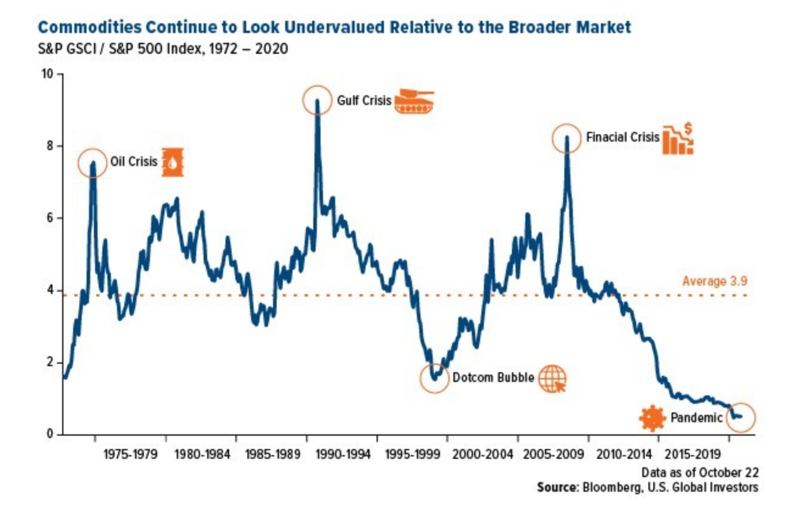 The last decade saw a deflationary boom and against a backdrop of low or negative interest rates, investors rushed to invest in bonds and growth stocks in developed countries, to the detriment of commodities (minus gold). While the economic recovery should have accelerated, a series of events--Brexit, trade wars, and the pandemic--have effectively postponed the end of the deflationary cycle. Fiscal austerity in the developed world and the Federal Reserve's missteps in 2018 also played a prominent role in the underperformance of the real economy as excess liquidity took refuge in fewer financial assets.

Impending reversal towards a commodity boom?

After the 2020 recession, micro and macroeconomic indicators point to an imminent trend reversal. Starting with financial markets, we know copper is up 70% from its March lows. We know the cost of shipping between Asia and Europe has tripled since November, due to under capacity issues. We also know of the outperformance of cyclical sectors over defensive ones since November, particularly the energy sector. While the economic recovery is not yet secured, most developed countries are currently in a "K"-shaped recovery, whereby some sectors of the economy are recovering faster than others (think banks versus hotels).

Two essential elements for an economic recovery are now at play: the fiscal lever and the monetary stimulus and there are likely to be "white swans", too: a strong recovery in consumption following the arrival of vaccines, and an improvement in business sentiment and potential recovery in world trade.

What’s China got to do with it?

Lately, commodity prices have been heading north, but the rally’s future could depend largely on China’s policies regarding recovery. If China prioritizes commodity sectors over consumption sectors, a super cycle could be even more likely and especially so in metals. This is because China accounts for about 50% of worldwide commodity demand in the mining space! Any more policies like China’s 2020 infrastructure stimulus could see momentum carried through into 2021 in the form of a real commodity super cycle not seen since late 2000s.

As of yesterday, copper prices have leapt 67% over the past year to about $9,100 a metric ton, and Goldman Sachs has increased its price target to $10,500. Metal prices will continue to benefit from a booming demand from foreign countries who will turn to China for further imports that involve the mining and use of base metals. A rippling effect would be in order and see neighboring countries like Vietnam and Taiwan see positive externalities, thanks to China. While some argue that a commodity super cycle is only the resulting effect of more money circulating in the economy, and short-term speculation, a full-blown economic recovery could prove this wrong—if China seizes the opportunity.

Recent insight by WSJ’s Costas Paris, indicates that container ship companies are betting on China’s imminent factory resurgence stemming from pent up demand. In fact, shipping lines ordered dozens of new ultra large box ships for trading between Europe and China as they anticipate a robust growth in the trans-Pacific trade. A Greek commodity and energy focused shipowner, Capital Maritime Group, has spent $1.1 billion to purchase more ships as they seek to capitalize on a commodity and energy boom. They anticipate western retailers, from e-commerce companies to mom-and-pop shops, to strive towards fully restocking their shelves.

China’s manufacturing engine could soon be reignited full steam, as November showed exports by value soaring 21% from last year and 18% in December. According to Trading Economics, China’s industrial production soared 35% in the previous three months after a 7% rise in December, as shown below. Among major industries, production for textiles rose 39.5%, ferrous metals 21.6%, and machinery 69.4%. Considering this data, how is there not a super cycle around the corner?

How to play it the bullish way...

In summary, the commodity super cycle will stem from many factors, but the major decider for a rallying commodities market is, well… China (if they prioritize commodity-oriented sectors). So far, Chinese production is up, manufacturing is up, and shipping companies are anticipating an influx in the commodity and energy trade business despite shipping prices being at an all-time high. Cyclical companies are already seeing gains in the US, where the Dow outpaced the S&P 500 and Nasdaq since the start of the year. The way to play the rally is through commodity ETFs, and energy ETFs, shipping companies like Hapag-Lloyd and Seaspan, mining, and metals companies like TECK and Invanhoe Mines (IVN) and cyclical companies for example General Motors, JPMorgan Chase, Boeing.

US vaccine rollout slows, but nowhere near the finish line

The number of new US homes for sale in June hit new high since Dec. 2008